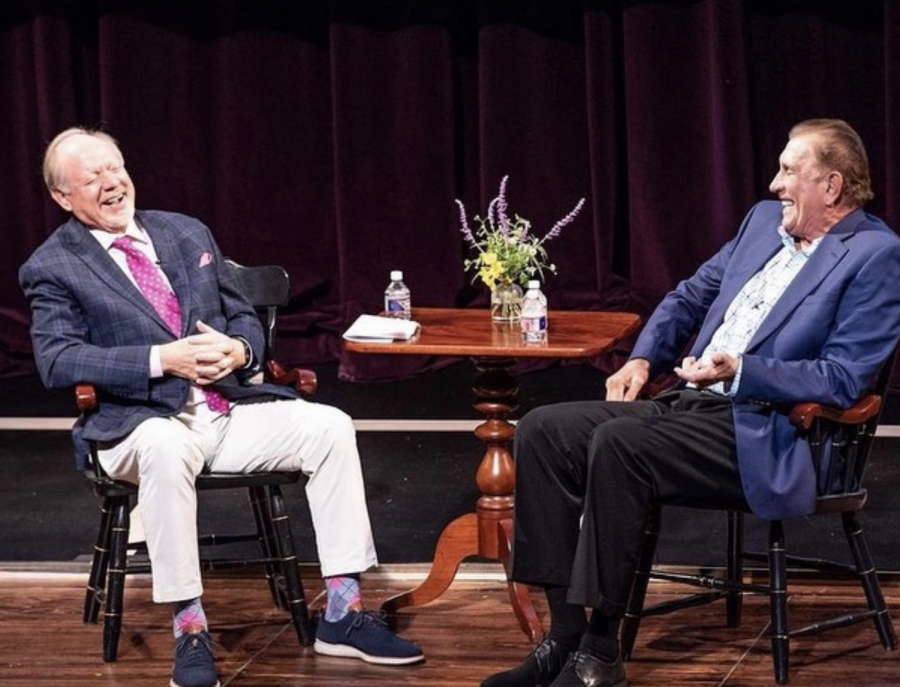 Former Houston Rockets player and coach Rudy Tomjanovich visited Kinkaid, where he shared stories and words of wisdom with the community on Sept. 20 and 21.

Mr. Tomjanovich was interviewed by reporter Matt Musil of KHOU 11 News for an audience of Kinkaid parents and visitors on Sept. 20. Juniors George Kinder and Elliott Crantz interviewed him during the Upper School assembly the next day.

In the interviews, Mr. Tomjanovich discussed his journey to basketball, memorable moments in his career and offered inspirational words for high schoolers. The Rockets championship in 1994 was the first championship a Houston sports team had ever won and it was by the coaching of Mr. Tomjanovich, who reminisced about how he was seen as a source of hope for Houstonians.

“If you quit, you can never succeed,” he said. “Give yourself a chance. Believe in yourself.”

Mr. Tomjanovich’s visit was a part of Kinkaid’s McMillan Character Education Speaker series, which promotes character development, integrity, enthusiasm and a love for arts and athletics.

Mr. Tomjanovich was drafted by the Rockets in the 1970 NBA draft, where he played as an all-star until he retired in 1981.

After 11 years, he became the coach of the Houston Rockets, leading the team to two NBA championships in 1994 and in 1995.

Mr. Tomjanovich was the coach of all-star NBA players such as Hakeem Olajuwon, Clyde Drexler, Charles Barkley, Shaquille O’Neal and Kobe Bryant. He described his strategy for success.

“Most people run into so much adversity and so much of what some may call failure,” he said. “The people who have success are the people who can get over the negatives.”

The McMillan Speaker Series is named after the late Coach Garry McMillan, who was a long-time Kinkaid coach and teacher. The Hrncir family sponsored this series to honor him and his legacy.