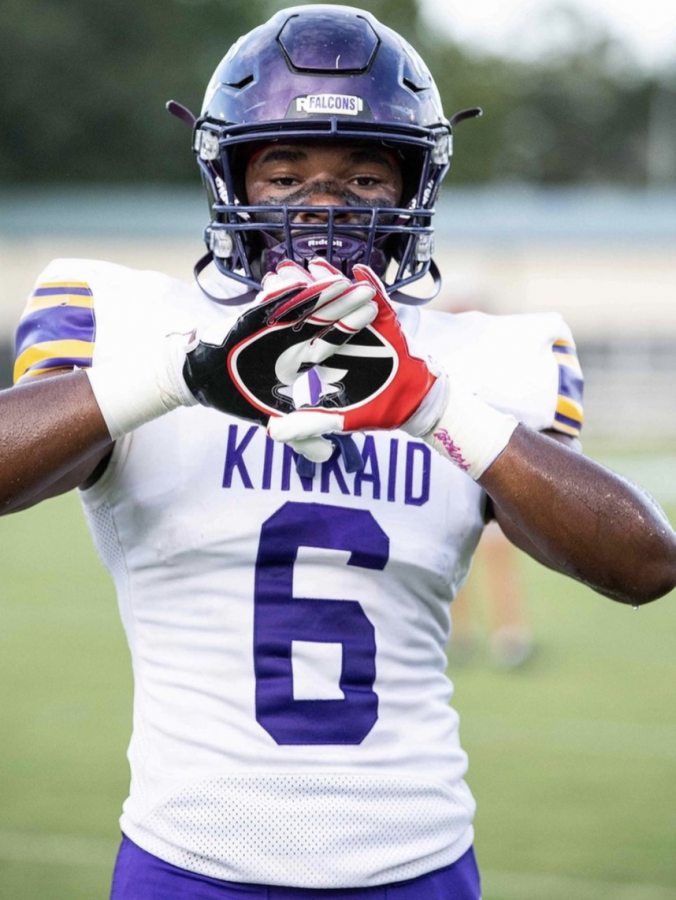 The Kinkaid varsity football team played its first game of the season on Sep. 3, defeating Second Baptist 21-14 in a thrilling game that was close until the end.

The game started off slow, with both teams struggling to gain yards.

After a Falcon turnover, Second Baptist was able to score a touchdown to start the second quarter. With his team down seven and the offense underperforming, head coach Nathan Larned decided to bring out a trick play.

Senior quarterback Louie Gustafson shovel passed the ball to Kinkaid’s star senior running back Dillon Bell. The Second Baptist defense was preparing to stop the Georgia University commit, and they never realized that senior wide receiver Alex Gottsegen had made a break for the endzone.

Before Dillon passed the line of scrimmage, he threw a dime to a wide-open Gottsegen, who ran into the endzone while the cheers from the student section rumbled the stadium.

The momentum had shifted.

The second half started with a massive hit delivered by senior Jackson Bloome to the Second Baptist kick returner.

After Kinkaid reclaimed the ball, Gustafson found Gottsegen with a pass that put Kinkaid on the one-yard line. From there, Dillon calmly ran into the endzone, giving the Falcons their first lead of the night.

In the fourth quarter, Dillon found the endzone again with a long run, giving the Falcons a two-touchdown lead, with sophomore kicker Grant Peterson knocking down his third extra point kick of the game.

However, the Eagles did not give up.

They scored a touchdown with three minutes left to bring the score to 21-14, and then reclaimed the ball with less than two minutes remaining.

Thirty yards from the endzone and tying the game, Kinkaid’s fans held their breath.

With 20 seconds left in the game, Second Baptist had a fourth down. Their quarterback passed the ball to what seemed like a wide open receiver, but then junior cornerback Micah Bell swatted the ball out of bounds, securing a victory for the Falcons.

When the horn sounded, students and Falcon players met on the sideline to celebrate Kinkaid’s first of many football victories this season.

After a full year, the student section had finally returned, galvanizing the Falcons and cheering them on throughout victory.