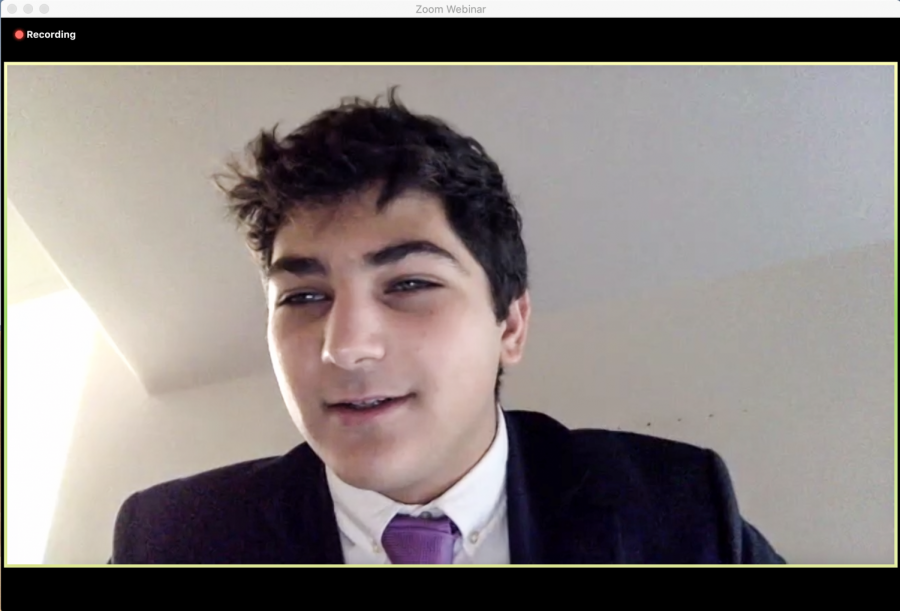 Jon Jafarnia '21 pauses his speech to check his phone.

Before a single class took place on Aug. 19, the first day of school, seniors put their own spin on the school’s 2020-21 welcome assembly.

Mr. Peter Behr, head of Upper School, turned the virtual assembly over to senior Jon Jafarnia, governing council president after opening announcements. Students viewing the online webinar may have scooted to the edge of their seats, increased the volume on their computers, and waited eagerly to hear what plans Jafarnia had for this unique year.

Dressed in a coat and tie, Jafarnia started his speech on a good note by addressing the year’s unusual circumstances amid a pandemic and urging Upper School students to stay positive. He welcomed the class of 2024 to high school, and making sure not to break tradition, he delivered calculations, down to the hour, for the exact amount of time each grade had left in their high school years.

Although his speech started off strong, Jafarnia’s momentum shifted in what seemed to be a blink of an eye.

Ringtones began to amplify through the Zoom webinar  as calls began to come in and light up his phone in the background. With each Facetime and phone call notification, his speech was interrupted. It was at this moment that all viewers knew what was happening: his assembly speech was being sabotaged.

Jafarnia said that between 9:43 a.m. and 9:47a.m., he received more than 20 phone calls and Facetime notifications from jokesters looking to stump his presidency on his first day.

“Honestly, I think it went pretty well, other than the calls,”  Jafarnia said. “If anything, it made it a little funny.”

Even if students just couldn’t wait until after the assembly to tell Jafarnia how good he looked in his purple silk tie, there’s no doubt that rules were broken. The incidents that transpired during the webinar were likely just silly, light-hearted pranks, but the actions were still a violation of Kinkaid’s new online behavior code, which prohibits the unwarranted use of technology that is not required for  class.

Jafarnia said he hopes students had a good laugh and are ready to ease into the school year’s hybrid learning routine.