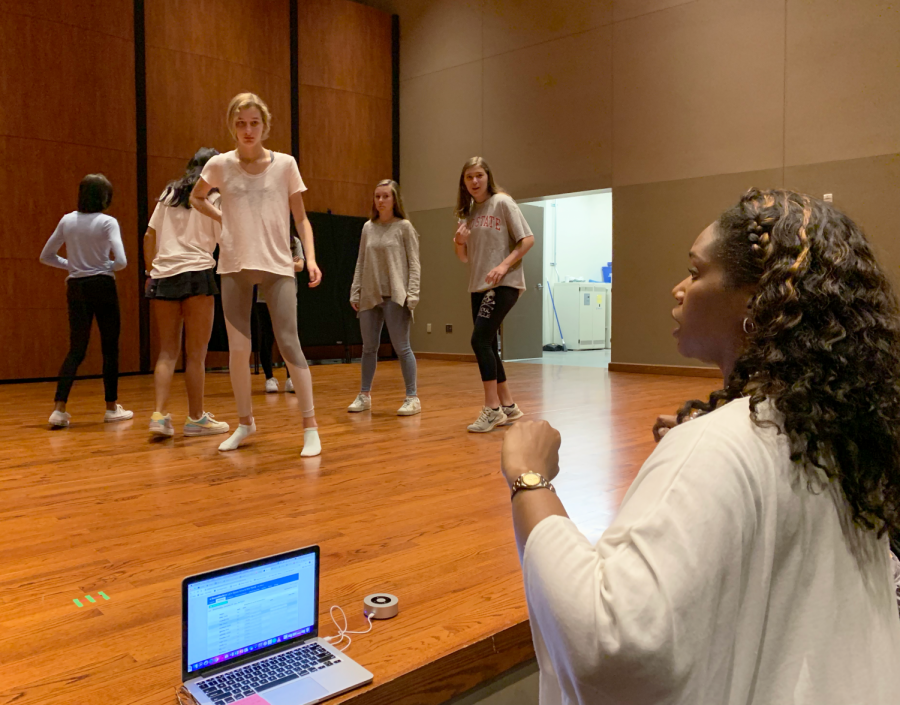 Mrs. Danyale Williams, a dance teacher in the Upper School, runs through an American folk dance with her students after helping them fine tune the steps. The students were taking Mrs. Williams' Interim Term Class called "Let's Dance Around the World. "

Giggles filled the recital hall as Mrs. Danyale Williams stood on the edge of the stage with her hands on her hips and her head shaking from side to side.

On the stage, 14 girls stumbled around, laughing, skipping, clapping.

The students were attempting to perform an American folk dance, one of the many dance styles they learned in the Interim Term class, “Let’s Dance Around the World.”

The girls scrambled to their places as Mrs. Williams called for another run through.

Instrumental music began and the dancers tried their best, but eventually chaos erupted on the stage. Students began falling behind the music and forgetting their steps. Mrs. Williams watched with an amused look on her face.

“I’ve never been so confused!” one student said.

Mrs. Williams turned the music off, climbed onto the stage and attempted to fix the confusion. She critiqued the dancers and retaught some parts of the routine.

The students stepped into place and prepared for another attempt.

“Do-si-do…here we go,” exclaimed Mrs. Williams as she turned on the music.

This time everyone stayed on beat and performed the right steps. At the end of the dance, some students were out of breath.

After performing for one another, it was time to learn a new dance.

“We are going to stay in America,” Mrs. Williams said.

The next style the students learned was the “Salty Dog Rag,” an American folk dance that dates back to the early 1900s.

The students paired up and Mrs. Williams began teaching them the new routine. Hand in hand, the dance partners moved in unison across the stage. Folk dances, which come from all around the world, often require teamwork to be executed properly.

“I chose to teach this class because folk dances are so different. It’s a nice way for students to try something new and have fun while doing it,” Mrs. Williams said.