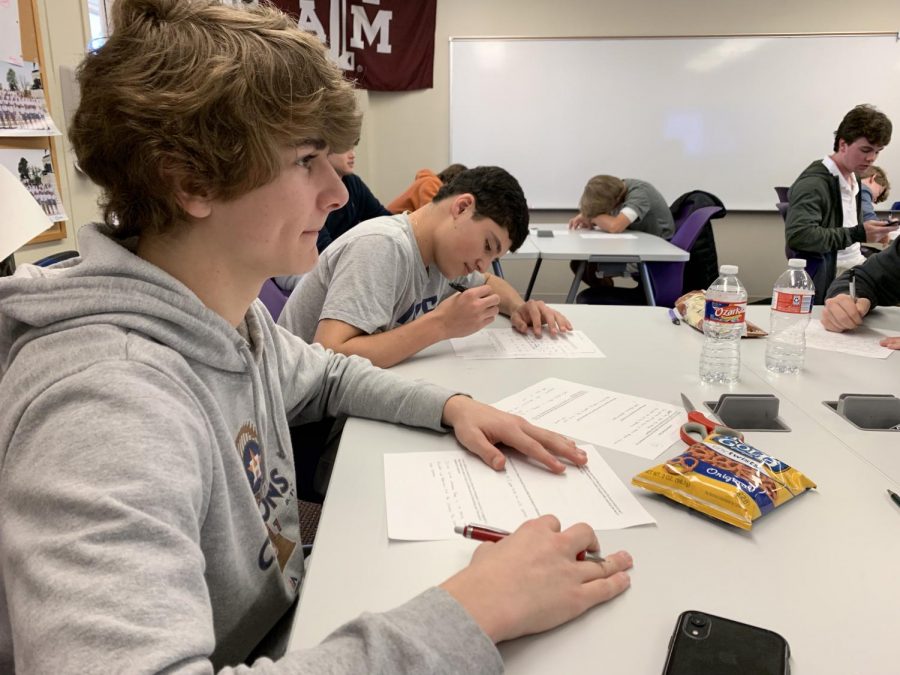 Nothing but the words about a “vision” remained on two whiteboards at the front of a noisy classroom.

Students talked over one another while others emptied chip bags into their mouths. But silence slowly took over the room as Mr. Kyle Botkin, Upper School math teacher, passed out papers.

The students took their last quiz before they started on their final essay for the Interim Term class, “Lonesome Dove,” a movie in which a mention of a vision is in the final line.

The film is about two aging Texas rangers who are retired and want one last adventure. They decided to steal a bunch of cattle from Mexico and open up the first cattle ranch in Montana. The story includes many universal themes such as social justice, friendship, tragedy and love.

“I chose to focus on this particular movie above all others because it is my favorite book and movie, but also because it is an opportunity to explore the Western history of America,” Mr. Botkin said.

On a Promethean board in the classroom was a map showing the West, which contained the path the main characters took throughout the movie.

“This part of American history is not normally explored in a typical U.S. history class,” said Mr. Botkin, who first watched the film in high school.

He reflected on watching the film when he was younger.

“This movie is what partially formed the relationship I have with my grandfather because he loves this movie too,” he said. “I see my grandpa in a lot of the characters in the movie.”

Thirteen boys watched “Lonesome Dove” with Mr. Botkin, just as he had done with his grandfather during his teenage years. No girls were in the class.

“This is definitely one of my favorite movies,” sophomore Cade Brown said.