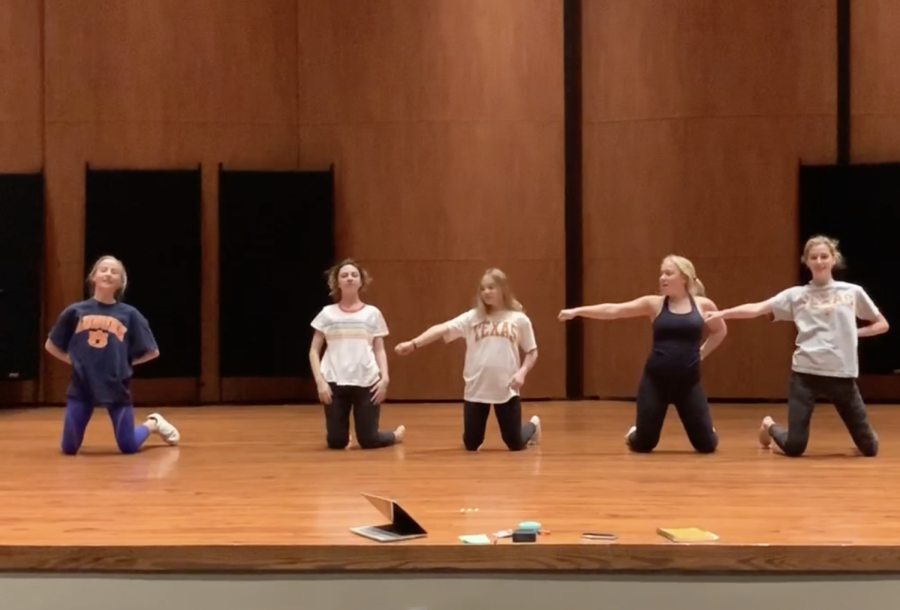 Five students slid in their socks around the amber-colored stage in the recital hall, waiting for Mrs. Anjaly Thakkar, Upper School math teacher, to start the music. The stage was so slick that lights reflecting from way up above appeared much closer.

Mrs. Thakkar clicked a button but no music sounded from a small, blue and black speaker that sat on the tip of the stage.

As students waited, their side conversations echoed beneath the recital hall’s high ceiling.

Mrs. Thakkar used her computer to start the music and sophomore Elizabeth Landrith called out, “five, six, seven, eight” as she hit a button to record her classmates in the Interim Term class “Inspired Choreography.”

The five students performed their dance twice before the next group took the stage to perform. Every time each group performed it’s dance, Mrs. Thakkar changed the song.

Students in “Inspired Choreography” must complete three projects — one a week — by the end of Interim Term.

“The first project is ‘Inspired by Music,’ ” Mrs. Thakkar said, explaining that she has her students choose a song of interest and choreograph a dance based on that song.

She said the second project is called “Inspired Through Movements.” At the end of the second week the students perform a dance they choreographed with no music, then Mrs. Thakkar selects a song to pair with each group’s choreography.

The last project, “Inspired by Subject Matter,” will require each group to choose an idea, concept or story, then pick a song and choreograph a dance that will bring the subject matter to life.

“I teach this class because I get joy from encouraging creative thinking in all aspects of life and showing the respect and discipline it takes to be a choreographer,” Mrs. Thakkar said.

Freshman Lucie Kunetka and four other members of her group faced the challenge of choreographing a routine with no music, but Kunetka said she finds dancing to be rewarding.

“I love dancing because I get to express myself and my feelings, and sometimes I don’t always know how,” Kunetka said.