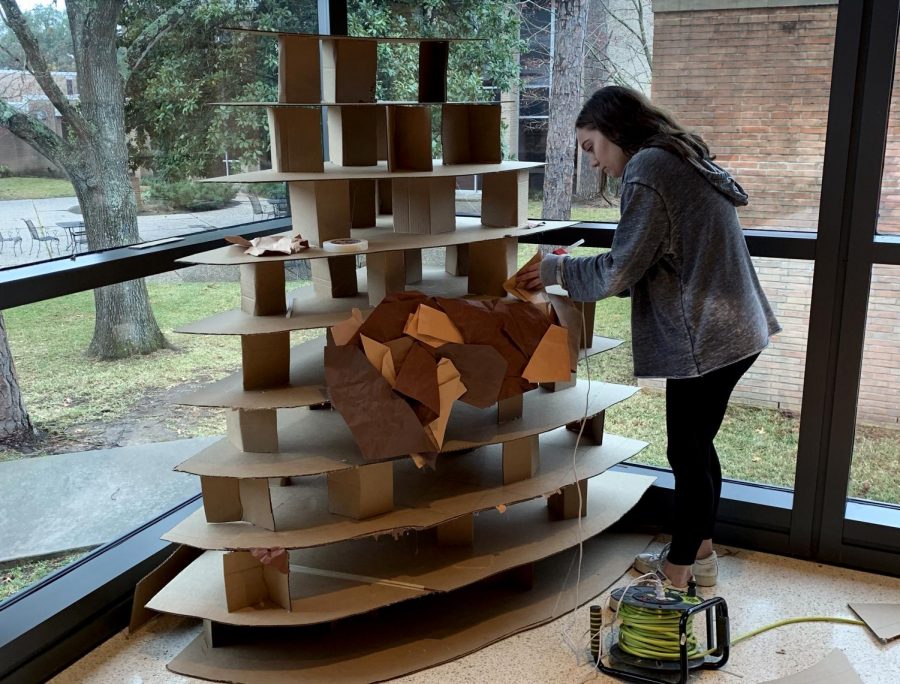 Not every tree begins with a seed. Some can grow from nothing but a roll of tape.

“The most beautiful thing in art is nature, so we decided to make a 9-foot tall tree out of cardboard and construction paper,” said junior Chase Pelter.

Pelter, along with the other juniors, Charlotte Shivley, Suzana Gilmartin, and Keller Horlock, chit chatted among one another as they concentrated on their tasks. Two were hot gluing, one was cutting pieces of cardboard, and the last was tracing small rectangles.

“I love to think that you can express your ideas visually and force people to think from their eyes,” Mr. Suber said.

“This class has shown me to respect and appreciate the culture of all different types of art while exploring the ways that other people may view art,” Pelter said.

Although artist may create art with an intention, it can be interpreted in many different ways.

“Some people see this as just a light fixture, but I see it as art,” said junior Suzana Gilmartin.

Each student is expected to create a group art project by the end of interim term.

While one group has planned to create a jail cell, another has crafted wooden blocks to be placed on the stairs leading to the third group’s cardboard tree.

Despite what their project may be, all three groups will have explored the artistic world.

“Taste the cardboard; it tastes like art,” Pelter said.