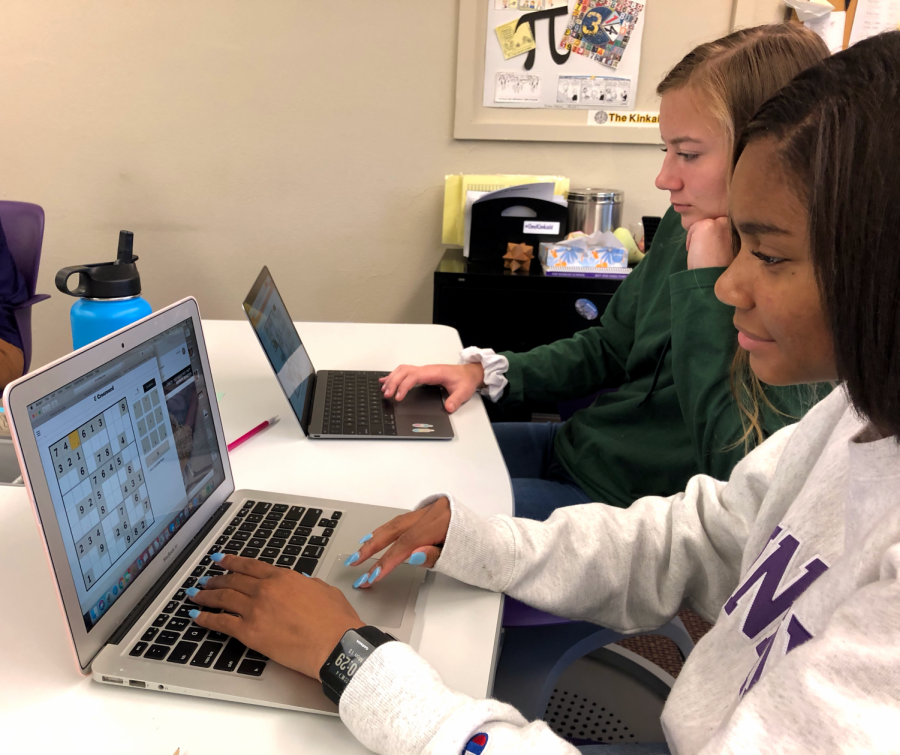 Eleven students sat in a circle working together and trying their best to solve the morning’s “MondayPunday” riddle displayed on a board.

What do you call a pair of brown pants with the letter K all over it?

Brain tweezers are a typical start to a day in “Puzzles and Problems,” a class during this year’s Interim Term.

With all the brains in the room, the riddle remained unsolved.

“Let’s jump over and do some Sudoku. Ready to learn how to become Sudoku ninjas?” asked Ms. Carolyn Clancy, the Upper School math chair who is teaching the class.

Ms. Clancy’s students’ eyes were glued to a screen as she gave them a mini lesson on the history of Sudoku.

She mentioned that Sudoku originated from Switzerland. However, people who play the game may mistaken its beginnings because the name came from the Japanese words, “Su Doku,” which translates to “solitary number,” according to the Independent, a British online newspaper.

After the brief history lesson, the class moved on to learning different ways to solve Sudoku puzzles.

“You have to be open to various strategies in order to solve the puzzles and you have to be able to think outside of the box,” Ms. Clancy said.

As she trained her students on the multiple tactics they can use, such as squeezing or cross-hatching, they scribbled down notes on their mint green papers.

Together, the class began solving a Sudoku puzzle, keeping in mind all the new strategies they’d learned.  After successfully completing a practice run, it was time for the students to solve some puzzles on their own.

While practicing on their computers, the students talked and exchanged ideas with the peers around them, hoping to crack the puzzles in front of them.

For some, the answers came like a breeze, however, for others, it was not as easy.

“The most important thing when solving puzzles is persistence. You always have to keep trying,” Ms. Clancy said.