Middles schoolers welcome audiences to ‘Be My Guest’ 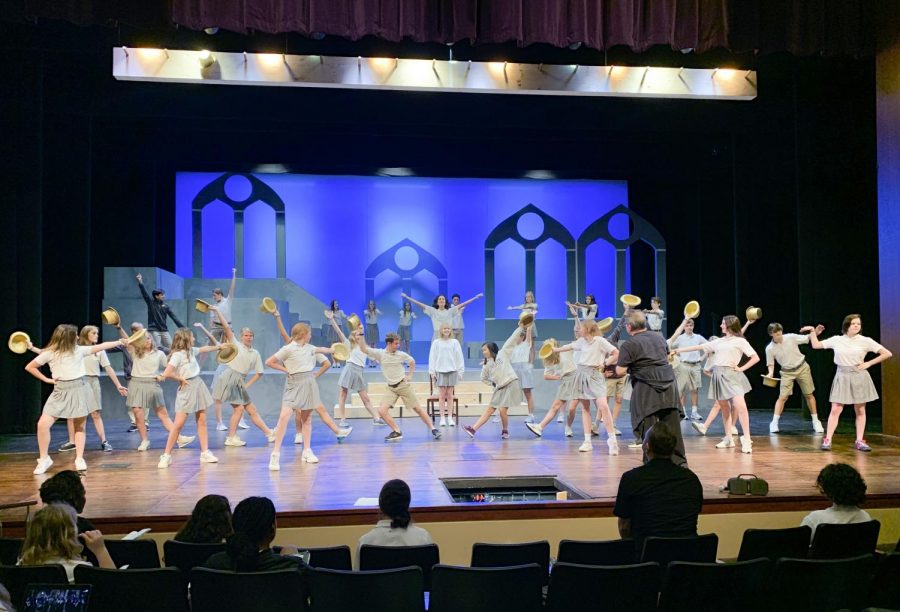 The stage shined as an ocean blue backdrop and 18 gold hats sparkled under the lights in the Brown Auditorium.

“You are utensils. You are napkins. You are forks. You are salt shakers. You are sad. And no one has come to your party in a long time. And then there’s a girl!” exclaimed Mrs. Katie Long, middle school speech and drama teacher, to the students on the auditorium’s stage.

Mrs. Long was helping the students get into character for their rehearsal of the musical “Beauty and the Beast.”

This is the first time in school history Kinkaid is staging a Disney-animated classic production, said Mr. Scott Lambert, director of Visual and Performing Arts.

“It is a show that requires a lot of high energy singing and dancing, and that’s something these kids have,” said Mr. Chip Colvin, Upper School choir and musical director.

Eighth-grade students covered the stage during rehearsal of the show’s opening number as Mr. Aaron Girlinghouse, dance teacher for the Middle and Upper school, called for a run through of “Be My Guest.”

Just before students scattered to their places, Mrs. Long asked a question as they gathered backstage.

“What percent of energy are you going to give?” Mrs. Long shouted.

This year’s cast consists of 128 students who had the Brown Auditorium imploding with energy during rehearsals. Their dancing and singing brought the set to life.

“I have to give a lot of myself to keep them focused and learning,” Mr. Colvin said.