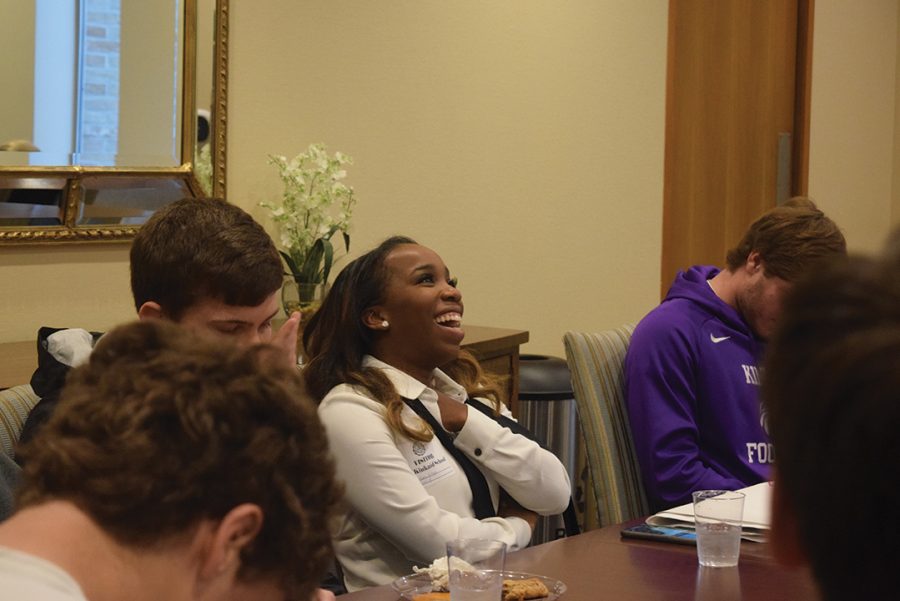 Ms. Fallon Ukpe '03 talks to Upper School students about her non-traditional path to her career during lunch on Thursday over Chick-Fil-A.

According to Ms. Ukpe’s website, she is a speaker, author, and entrepreneur. She started at Kinkaid in ninth grade and was set on being a doctor since the age of seven before switching to business to make a difference in innovation in healthcare.

She spends her time speaking to groups, writing, and coaching, she said, trying to help people follow their passions.

“What I wish someone told me as a senior in high school is there are so many different paths to what it is what you want to do,” she said during Thursday lunch in the Anderson Room. “Don’t be afraid to try things,” Ms. Ukpe said. “Don’t expect it to be a straight line.”

Her path to her career inspired her book, Life Is a Squiggly Line: Start Embracing Imperfection and Stop Settling for Safe, which debuted on Tuesday.

“I thought it was very inspiring to know that there is more than one pathway to what you want to do,” junior Hunt Tower said.

The Young Alumni Leadership board invited Ms. Ukpe to speak to students.

“[She] has had an extremely successful career doing a variety of things,” said Ms. Alexa Leach, Alumni Activities Manager, “and her message that life is not a straight path, but rather a squiggly line is such a great takeaway for students thinking about life after Kinkaid.”

Ms. Ukpe also spoke to students in India Club, the African American Appreciation Club, the Viva La Raza Club, and the Jewish Heritage Club during club time on Thursday in the Amphitheater.

In addition to talking about her path and the lessons she learned, Ms. Ukpe also talked about the challenges of being a woman of color in her field of work.