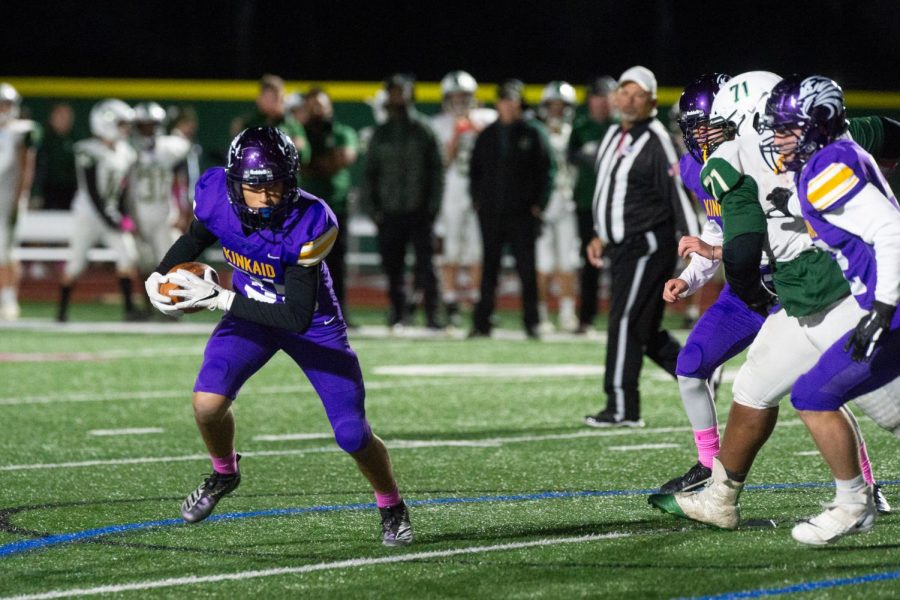 Nick Cook runs the ball against the Greenhill defense.

After a blowout loss to Episcopal on Friday night, Kinkaid looks to win its next two games and earn a rematch at the SPC championship game on November 9.

Although the past game was tied at halftime 3-3, and Kinkaid started the second half with a deep drive leading to a touchdown, 28 unanswered points put the game away in Episcopal’s favor. Additionally, two forced fumbles late in the 3rd quarter put the ball in Episcopal’s hands in Falcon territory.

After the loss, Kinkaid moved to 4-4 (4-1 in SPC), pushing them behind Episcopal who moved to 5-0 in SPC standings. To clinch the SPC, the Falcons now have to win both of their last two games — an away game against Houston Christian and at Rice Stadium against St. John’s.

“We are not underdogs in those games; hopefully, we can capitalize,” said senior and Falcon safety Chris Stallings.

Plagued by injuries, Kinkaid lost its first three games of the season against teams that were less qualified than even the ones in SPC.

Senior Linebacker Reed Butler attributed this to a “bit of trouble finding identity.”

“We really have turned it around and played at a high level since,” Butler said.

With back-to-back wins, Kinkaid will qualify for its third SPC championship game in a row and having won its last two, hopes to clinch a third straight SPC championship.