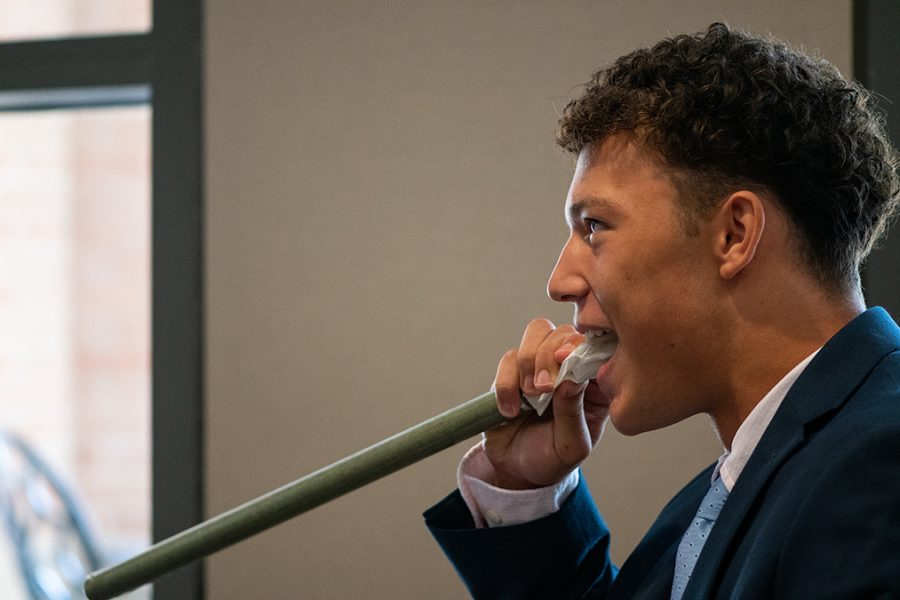 Senior Alex Garcia bites on one of Dr. Brady Barr's tools to measure his bite force. It was 94. Barr is Kinkaid's 2019-20 Papadopoulos Fellow. 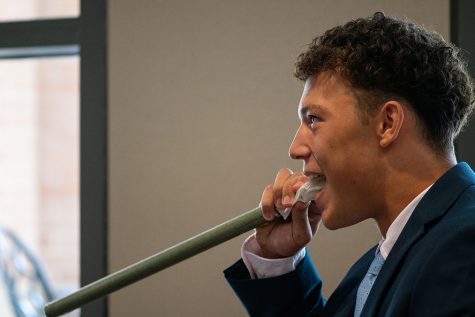 Dr. Brady Barr, the 2019-20  Papadopoulos Fellow, came to speak to students Tuesday during assembly, D Period, and lunch. He is the first herpetologist (someone who specializes in reptiles and amphibians) to have captured all 24 species of Crocodilia, and he was the host of National Geographic’s “Dangerous Encounters with Brady Barr.”

Dr. Barr became known for using unorthodox “gear, gadgets, and gizmos” to capture and track animals. He aimed to learn more about endangered animals and raise awareness about them by getting “up close and personal.” Several of his ideas arose from the imagination of children: from disguising himself as a crocodile in an elaborate costume to using a bandaid, a ball of fishing line and a toothpick to pry a 23-foot long reticulated python in a snake cavern, Dr. Barr said he is “a kid at heart.”

He has often been in deadly situations, nearly losing his life at times and sometimes getting serious injuries, like snake bites and losing a finger. He said he gets the most nervous when National Geographic asks him to interact with animals he’s unfamiliar with, such as baboons, elephants, and sharks. However, fear, Dr. Barr said, keeps him alive.

“The day I’m not scared is the day I leave this job,” he said.

Dr. Barr runs two programs that aim to educate children about endangered animal conservation and the peril of extinction. He runs a program called Eco Adventures, an organization that emphasizes conservation of wildlife and fosters ecological education through hands-on activities. He also spearheads Head Start, a program he founded where kids raise crocodiles and release them into their natural habitats to encourage repopulation.

For crocodiles and other endangered species, it is dire.

“We live on a planet in peril,” Dr. Barr said. “It is a race against time. Education is the way to protect these keystone species.”

Continuing his presentation after assembly in D Period and lunch, he used several interactive demonstrations to teach students about these animals. Students measured their bite force to compare it to that of crocodiles and snapping turtles, and measured their reaction time to see if they could avoid a striking snake.

“I thought it was really interesting that he never considered going into the field he is in now. He just took a chance and found his passion,” senior Katie Brooks said.