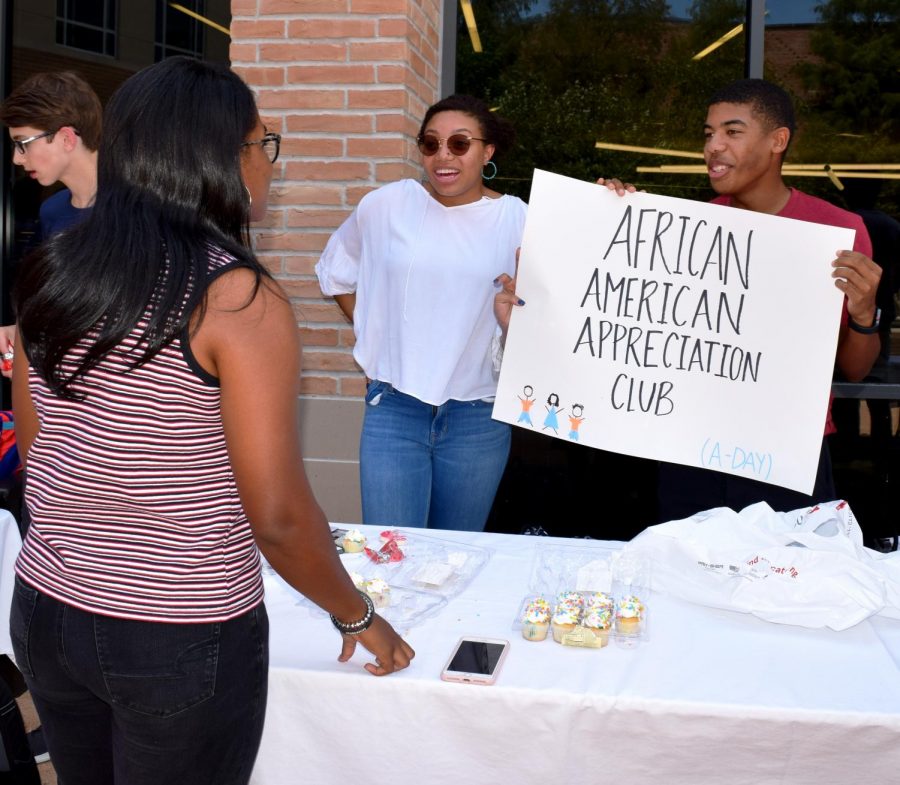 Senior Haylie Sims speaks with her peers, Jasmine Wright and Nicholas Dillon, as they tried to attract new members Monday during Club Fair. The annual event is held in the quad, which is transformed into a bazaar with booths, food and activities.

Club Fair has been set for Monday during lunch in the quad. In addition to the 38 recurring clubs seeking to recruit students, several new clubs will have booths set up.

Here’s a preview of the seven new clubs this year:

To take a class in astronomy, a student must be a senior. But as a non-senior, Will Traband wanted to share his passion with the student body, so he founded the Astronomy Club.

Although there was a club in previous years, Traband said this one is distinct.

“We are not associated with last year’s Astronomy Club,” he said. “This is a separate club that plans to actually do the things it advertises. If you were put off by that club, this will be different.”

Among other activities, Traband plans to observe sunspots and hold a screening of the movie Interstellar. He is also in the process of organizing an outing to the George Observatory to watch dark skies less affected by light pollution.

According to Traband, the club aims to provide a community where students can “nerd out with other like-minded individuals about space.”

While artistically inclined students have opportunities to explore their creative interests, there are relatively few for those who want to pursue those that are STEM-related. To close this gap, Hallie Brass founded the Coding Club to give students more opportunities to learn about coding.

The club has activities planned for new and more experienced coders.

“During the first semester, we will be using Scratch, a free, block-based coding program to help beginners understand the basics of code,” Brass said.

More advanced students, on the other hand, will work on larger team projects such as games.

Brass invited students who don’t want to pursue a career in coding to join the club as well.

“Coding can even be useful outside of the compsci range,” she said. “You can make a code that will automatically plug numbers into a formula, or it can be used to make some simplistic designs that look just as good as ones that are drawn. In the modern era, almost everything we do is affected by code.”

“Being a part of this club provides unique opportunities to serve and show love to other students and faculty,” Laura Saunders said.

While gardening aficionados can learn about the science behind plants in class, the Garden Club will provide experiential activities.

“First and foremost, the Garden Club will learn about and work on behalf of the kitchen container garden located outside of the dining center,” Lillie Morenz said. “This is a hands-on, interactive opportunity that will make noticeable improvements to the school garden and build life-long skills.”

The club also plans to share information on farmer’s markets, recipes and unique gardens, as well as talk to farmers, florists, and landscape designers in the Houston area.

The club was started to educate the student body about Jewish culture, which Kayla Davidson said it will do through on and off-campus activities.

They plan to host an Israeli dance teacher, help out at bar and bat mitzvahs, eat Jewish food and watch videos.

“Don’t be hesitant to join because you aren’t Jewish,” Davidson said, “it’s not a religious club at all, it’s more of a have-fun-with-people-and-learn-about-Jew-things club!”

In the vein of community service, the club plans to work with kids in need in the Houston area.

The club has several activities planned for the year, Emma Hurley said, such as throwing a Christmas party for the children at the House of Tiny Treasures, making meals for Kids’ Meals, and working with fellow teens at Social Motion.

“I want people to know that this club is going to be a really great and impactful experience,” Hurley said, “and that each club meeting we will have a fun project to work on and snacks will be provided.”

Identity-oriented clubs have existed for several years at Kinkaid, including the African American Appreciation Club and India Club. However, there has never been a club for LGBTQ+ students—until now.

The club has a few ideas for activities, including a movie night and discussions about LGBTQ+ issues.

“We wanted to help people,” Spencer Powers said. “There are a lot of kids out there who don’t have a support network, and I think the club is a way to find ways to help them out.”

“Someone you know might be closeted and just looking for support,” he said, “and joining the club lets you gain the knowledge and resources that can let you help them.”

Standing clubs that will be continuing this year are: