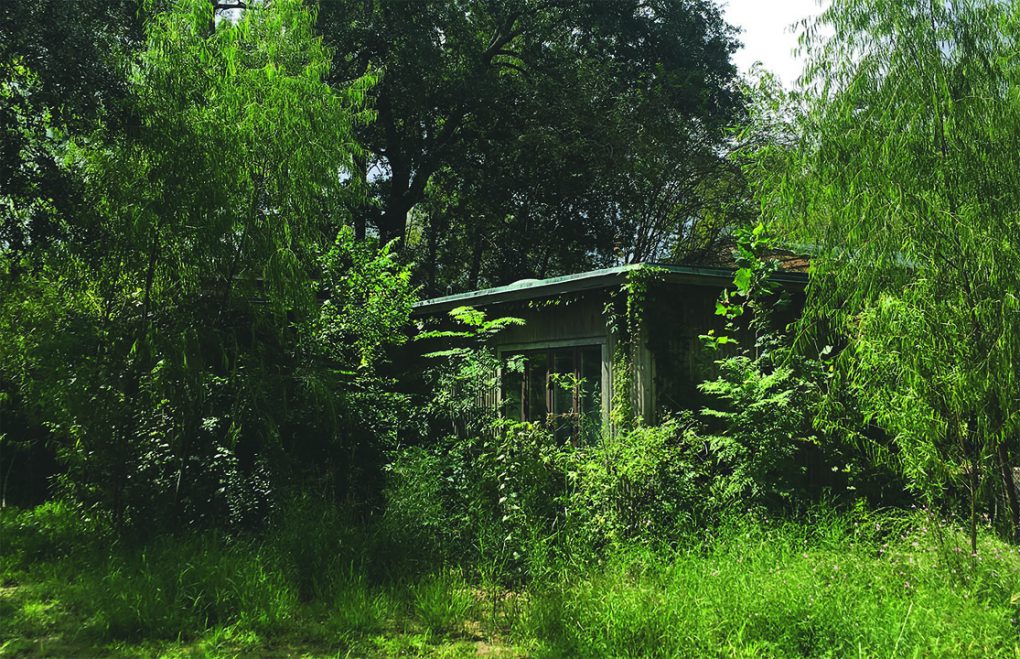 This building, located on the 25 acre plot of land purchased in 2011, was taken down in September of this year, to make room for the new west campus construction.

The time to put down the shovels, roll up the blueprints, take a step back and admire what Kinkaid accomplished arrived in May 2011. Kinkaid embarked on a momentous challenge to redesign its Piney Point campus, according to a master plan.

After eight years of construction, obstacles and planning, students and families can admire what Kinkaid has accomplished.

Kinkaid opened its new campus at the current location in 1974; however, it didn’t take long before Kinkaid began making plans for new construction.

More recently, as some students and faculty may recall, the 25-acre land on the west side of campus, previously owned by a female resident, was purchased in 2011. “The Don North days were when the majority of the planning for purchasing the West Campus land happened,” said Mr. Ed Jordan, director of facilities at Kinkaid. The process for actually purchasing the land was a little trickier than expected. Kinkaid agreed that they would purchase the track of land and the resident  could live there until she moved or passed away.  In the meantime, Kinkaid began the first 60 percent of the process – planning and designing. Piney Point Village is primarily residential; therefore, the Piney Point city ordinances are designed for homes. As a private institution, it is difficult for Kinkaid to obtain construction permits due to the ordinances; unlike homes that are built on public land, so it’s easier to construct a home in Piney Point than an Upper School or new gym.

Meanwhile, the board of directors was working on architecture plans. They hired a firm and set to work to redesign the Upper School, expand the south side of the school, including the new cafeteria and parking garage on the 25-acre plot of land previously purchased. After a few, “brainstorming sessions,” said Mr. Jordan, the board decided that it definitely wanted to establish a new entrance to reduce traffic, make pick up easier, and have fewer students parking at Chapelwood Church.

So, students at the start of this new school year were greeted with a new, refined campus entrance which was completed over the 2018 summer. Coming West on San Felipe St., the entrance curves around the remnants of the front forest and connects with the old road, pulling the west-coming traffic out of the San Felipe St. and Kinkaid Rd. intersection. Not only is this the most forefront change of the past seven years of Kinkaid construction; however, it also signifies the beginning of the end of the Master Plan.

The plan for the construction is to complete it South to North (from the Backyard to the front of the school) so as not to damage any of the newly constructed property or roads when moving equipment. The planning for this programme began in March of 2014 and is coming to a close as the school finishes one of its final projects–the new entrance.

Although a small addition, the entrance has made a large impact on the school’s traffic flow. Roya Moradi (11) said, “I’d say the new entrance has cut my drive time down by about half. I come West from San Felipe so it really makes access to the parking garage much faster.” She also noted the parking garage has made a difference in her commute time. Although it takes about three minutes to walk from the Freshman floor to the Upper School office, this is an alternative to a drive from Chapelwood.

This is not to say that Kinkaid is finished with its construction, however.

Plans for the new upper school are projected to begin within the next five years. As the school grows and the upper school is rebuilt, Mr. Jordan notes that the board will be looking to revisit the size of the school’s student population.