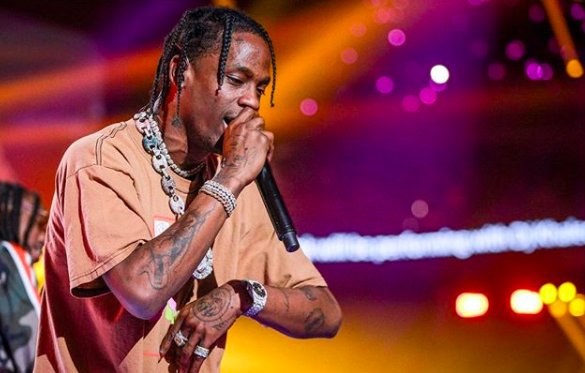 Since Travis Scott has blown up on a national and international scale, performing on world tours and having a child with worldwide superstar Kylie Jenner, he has proven to be a star who doesn’t forget where he comes from. As his fame exponentially transcends not just the rap game, but the global pop culture dynamic as a whole, his love for Houston grows, and on Aug. 3, after much anticipation, he finally delivers a tribute to his hometown in “Astroworld” that has captivated Houstonians all across the 713.

The hype for this album reached an all-time peak in early November 2017, when the Houston Astros won the franchise’s first World Series. Scott teased the album on Twitter, referencing “Astroworld” throughout the World Series run and even made an appearance with the team during their World Series parade. When Scott announced that he would perform at a Houston club the night of the parade, fans were convinced that he would finally release the album, but as the performance came, he played new songs and no news of the album emerged.

Eight months later, once the post World Series hype died down and the Astros’ success was impeded by injuries to key players, Scott took matters into his own hands to promote his upcoming album. The hype re-emerged once he announced an August release date for his album in late July. Promotions continued when giant, inflatable, golden Travis Scott heads began to appear at iconic locations throughout Houston, including Cactus Music, Screwed Up Records, and, of course, Minute Maid Park – the same golden heads that appear on the album cover.

On the surface, “Astroworld” appears to be a fairly long album considering its 17 tracks, but the project only spans across a mere 58 minutes, revealing that each song is somewhat short, with only three exceeding five minutes while five tracks play for under three.This use of many short songs instead of a smaller number of longer songs enables Scott to use a vast variety of beats and sounds and allows him to experiment with sound schemes that he had not yet explored in his career to this point.

This is exemplified on tracks including “Coffee Bean” in which he uses a slow, echoing beat with no voice distortion and “Yosemite,” which has proven to be one of the most popular songs of the album with a guitar-centric beat, unique for rap music, and even more rare to Scott’s music.

While the long tracklist enables Scott to experiment with new music, it also provides ample opportunity for him to fall back into his old tropes and tendencies, which he does a little too often. This is not to say that this music is bad; it just is not different enough to make much of a statement or progress his career. He begins to befall the same fate that cursed Migos on their album “Culture II” in which they faced criticism that their music all sounded the same. While Scott’s overuse of the same beats does not quite match the level that Migos reached, he walks a thin line and at times leans more to one side than the other.

The central focus of “Astroworld” is to convey the culture of Houston through  Scott’s music. He takes this approach through equating the city of Houston to a circus, which in many ways it is. As one of the most diverse cities in the U.S., Houston has grown into a melting pot of cultures that often combine and merge into a circus-like spectacle where one never knows what they may come across next. His naming of the album after the Houston amusement park “Astroworld” reinforces the idea of the album as a circus depiction of Houston.

Scott conveys this message on the cover by combining different aspects of Houston’s identity, ranging time periods and cultures. The old-school clothing on the people in the image directly contrasts the modern Scott head dominating the center of the image. Additionally, the bright colors and glowing entrance stands out against the destroyed car and trashed floor in the image, paralleling the city of Houston as not always picture-perfect. Yet, it is not always a trashed wasteland, revealing that there is a range of sides to Houston’s identity.

A common criticism of Scott’s music is that he often overproduces, adding extra sound effects, 808’s and voice enhancers. This can lead to a chaotic track in that listeners may get lost in the cacophony of the music rather than what the words are saying. However, Scott does this intentionally to reinforce the fun house, distorted circus theme of the album. Through this overproduction, he almost creates a “chopped-and-screwed” image of the “Astroworld” experience, equating the city of Houston and its distorted culture to that of the Astroworld amusement park. While most fans agree that at times Scott can get carried away – for example, he should have left Drake’s verse on Sicko Mode in one piece rather than cut him off just as he starts to go in – Scott’s use of overproduction on “Astroworld” is intentional, and an integral aspect to convey the theme of the album as an allegory for Houston’s culture.

While this project is not the career-defining album that fans had hoped to see from Scott, especially after such an anticipated arrival, it is an homage to the Houston culture that will keep hometown fans throwing up the H every time they hear “Astroworld.”