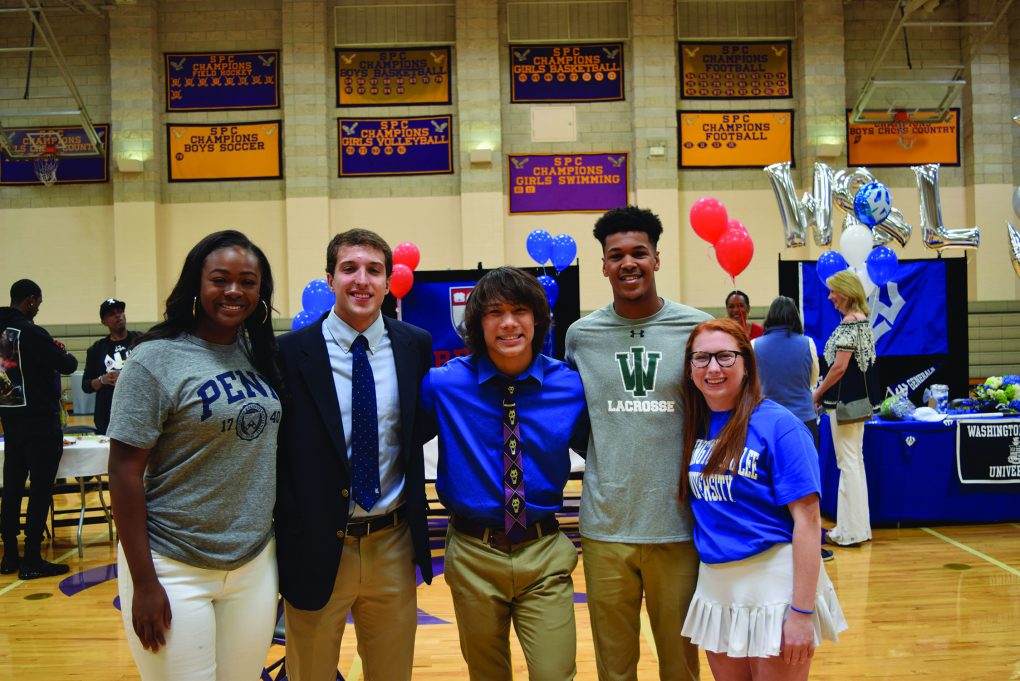 Five seniors signed their formal agreements to play college sports on Wednesday, April 11 in the Melcher Gym during lunch.

Nia Caldwell (12) has decided to continue her throwing career at the University of Pennsylvania. Caldwell began throwing when she was in the seventh grade, but never thought she would compete at the collegiate level until the beginning of her junior year when she started to get serious about the sport. In addition to being an All SPC athlete in the shot put, Caldwell made the Junior Olympics and USA Track and Field Championships last summer. Caldwell’s goals for her college throwing career include gaining determination and strength through difficult workouts, throwing personal records, and making friends on the various sports teams at Penn.

Chance Allshouse (12), the three time Varsity Track and Field captain, will compete as a decathlete at Rice University next year. After a tough junior year, in which Allshouse went through four shoulder surgeries, he was able to attend a clinic at Rice where the coaches expressed interest in him, and eventually offered him a spot on the team. In college, Allshouse hopes to continue to grow and contribute to the success of Rice’s track program.

Noah Chan (12), an All-American and four-time SPC Champion, will continue to wrestle at Franklin and Marshall College. Chan looks forward to the renowned environmental science program and brotherly nature of the wrestling team. After a recruitment process full of “twists, turns, rejection, and redemption,” as Chan described it, he is both grateful and excited to compete at Franklin and Marshall, where he hopes to be an All-American at the NCAA D1 tournament.

Growing up in New Jersey, lacrosse has always played a large role in Malcolm Hedgepeth’s (12) life, so it is no surprise that it will continue to be in college where he plans to attend Illinois Wesleyan University. Hedgepeth is an All South Zone athlete who dominates the midfield. His favorite part of playing is watching his mom cheer for him. After seven years of dedication to the sport, Hedgepeth has high hopes for his college lacrosse career.

Katherine Berman (12) was initially drawn to field hockey because of her friends, her love for the outdoors, and her desire to follow in her mother’s footsteps, who played field hockey when she was younger. After picking up a field hockey stick for the first time in sixth grade, Berman is beyond excited to continue playing in Lexington, Virginia at Washington and Lee University. Berman was one of the four senior captains who led the 2017 Girls Varsity Field Hockey team to their victory in the SPC Championship. Berman is also a member of the Varsity Soccer and Tennis teams. After a stellar high school career, Berman said goal for her college career is to do her best and help the W&L field hockey team continue their success in the ODAC Conference.