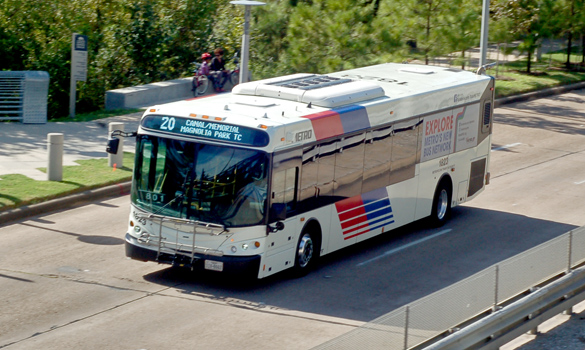 It is rush hour on one of the busiest Houston streets, and the bus slows to a stop. One person gets on, two people get off. Clearly undervalued, public transportation is centered and works well, but almost no one in Houston uses it.

On a good month, upwards of seven million tickets (Metro Ridership Report) are bought for Metro buses and light rail, which translates to only 270,000 tickets bought each weekday. Basically, this means only about 200,000 people use public transportation each day, which is just four percent of Houston’s population. To compare, 50 percent of New York City uses public transit, which translates to four to six million people a day.

The Houston Chronicle describes the issue perfectly: “Where area homes, shops and offices were developed more with cars in mind–parking lots in front and block after block of curb cuts for entrance and exit–transit usefulness diminishes.” While most transit systems are useful for the people in a city center, great ones reach into the suburbs and are convenient for all. This rule should apply evermore to a city as sprawling as Houston, yet many say that they only take the light rail, but never taken the bus.”

One issue with transportation is its inconvenience, with none of the buses or rails offering the route they need. For many, public transportation twice as long as driving. To add to this, parking is mostly free everywhere, so there are even fewer incentives to take the bus or light rail. The only few locations where parking is expensive is Downtown and the Medical Center, but few live there.

Also, many have significant issues with the safety associated with the bus. Many are afraid to take the bus late at night. However, many statistics point out that the issue has gotten better.

Despite these issues, Houston is improving its public transportation with new projects. Light Rail along the Main Corridor has plans to expand further northward, possibly reaching from NRG Stadium all the way north to International Airport of Houston. The other two rails, the Green Line and Purple Line, can expand further towards Hobby Airport, or westward, possibly connecting to the Northwest Transit Center. This could connect most of Houston so that everyone could use light rail.

The Northwest Transit Center is located between I-10, I-610, and 290. The importance of this station is its future. The Texas Bullet is a plan for a bullet train from Dallas to Houston that could transport people within 90 minutes–a drastic improvement from the lengthy four-hour drive. This speedy train will bring people from Northwest Transit Center to Downtown Dallas. However, the key is for people to be able to access this station. For sophomore Meredith Huston, a repeated traveler to Dallas, “This project is a great relief on the three and a half hour boring ride to Dallas,” as now the 90 minutes will be filled with leisure time.

One important new project that will connect to the station is the construction on Post Oak Blvd., which can be attributed to the Uptown BRT project, and is going to create a fast option for public transportation from North Bellaire to Northwest Transit Center. The construction should continue until early 2019, when the first buses should begin on these routes. The plan is to convert this transit into a light rail to make it faster and further connect through Houston.

These projects aim to accomplish more than just  convincing people to take public transportation. Several independent studies have proven public transportation to be the foundation of a high-functioning city: it makes the city more livable and helps create greater happiness all around. Also, with the issue of climate change growing, it reduces emissions to not drive cars but take buses or rails instead.

Despite the inconvenience of public transportation, the uses of it and the push to create new ones can help make Houston more beautiful and efficient overall.

Biking around Houston can be beautiful and efficient. With the new bike rack at Kinkaid, you can bike from your home to the school. While San Felipe and many of the throughways towards Kinkaid are dangerous, many roads have designated pathways and sidewalks. I personally have biked from my house to Kinkaid using South Rice and San Felipe, sticking to the sidewalks during the more intense hours. If you are looking for safety, Memorial provides a great bike ride and is beautiful. One route that I would suggest many try is at Memorial near I-610, on a path that leads you straight to downtown and takes less than an hour to complete. However, if you are looking for efficiency to go through the city, then bikes are not for you.

You pay your $1.25 and get on the bus, heading to wherever you are planning to go. For me, it was the Medical Center. One bus route later, and a short walk, and I arrived at my mom’s work, ready to go to dinner. The bus system in Houston works very well within the city and is a safe and efficient way to travel. Contrary to popular belief, the buses are clean; however, if you are traveling away from downtown and the Medical Center, the buses become less and less efficient. For me, the ride to Kinkaid took 1 hr and 20 min, almost three times as long as the same distance by car. The buses are comfortable however, and the stresses of driving during rush hour aren’t there, so that is one advantage. One key disadvantage about Kinkaid’s location is that the closest bus station only has buses that run every 30 minutes, and the one at the intersection of Voss and San Felipe is a 16 minute walk.

While Light Rail does not go towards Kinkaid, it is by far the fastest way to get to anywhere in Downtown, the NRG Center, and soon the Galleria. If you are heading to a playoff Rockets game, or a Texans game, the Light Rail (Red Line) should provide fine access to these events. I personally have taken the Rail multiple times to and from NRG for both Texans games and the rodeo, and it is extremely efficient because it skips the steps needed to park. Additionally, they are the cleanest form of transportation, and sometimes the events provide free tickets for the rail. I would highly suggest you try out the rail instead of parking and paying and driving the whole way because it gets rid of that hassle and is a kind of adventure.