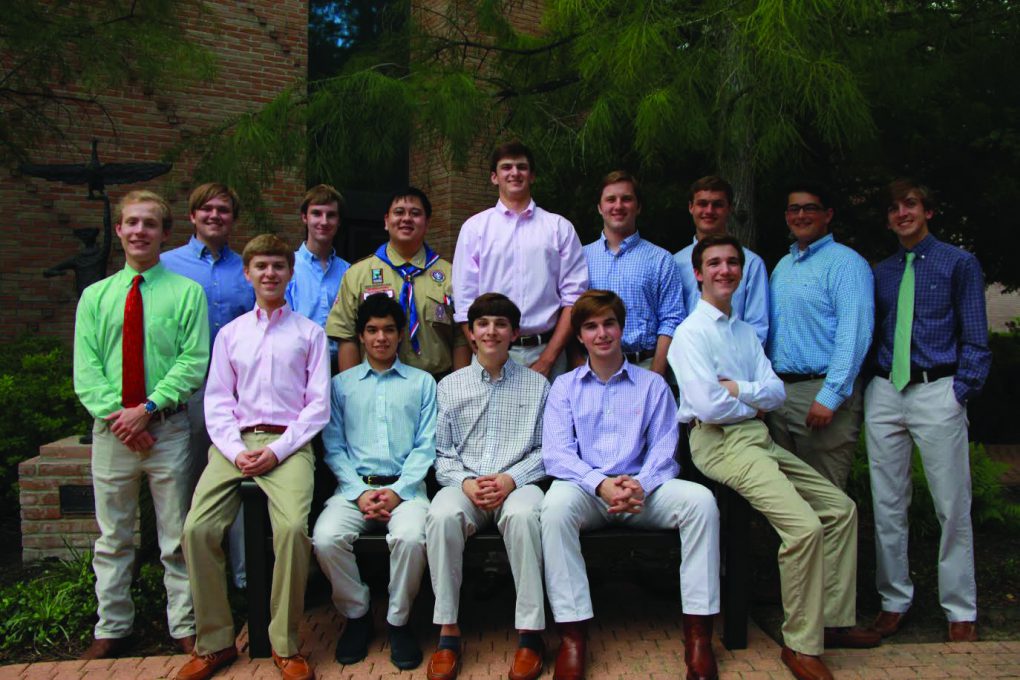 Fifteen graduating seniors will join the company of one U.S. president, the first man on the moon, the founder of Wal-Mart, and thousands of other dutiful, hard-working men who have earned the rank of Eagle Scout.

According to the Boy Scouts of America, only 4 percent of all Scouts meet requirements to achieve the Eagle Scout Award. To do so, Scouts must remain active for at least six months after reaching the rank of Life Scout (one step below Eagle), provide letters of recommendation that can attest to the fact that the Scout adheres to the principles of the Scout Oath and Law in daily life, earn a total of 21 merit badges, create and execute a service project in one’s community, and stand before an Eagle Scout board of review.

TX Harris (12) began his scouting career like many, as a Cub Scout, in first grade. It wasn’t until seventh that he entered the more mature realm of Boy Scouts. He initially joined Troop 55 after moving to Houston from East Brunswick, New Jersey. Although difficult on various levels, the move offered him new opportunities and resources to go on campouts.

Harris was heavily influenced to continue his scouting because of his dad, Upper School History Chair and AP Government and Economics Teacher Dr. Ed Harris, who is also an Eagle Scout. TX Harris wanted to follow in his father’s footsteps, and to do so, utilized every piece of advice from his dad, who had the perspective and experience of a successful Eagle Scout, of Assistant Scoutmaster of Troop 55, and of a father. The younger Harris said that the most important lesson his dad taught him was the value of punctuality and how critical this trait is in a program designed to make you into a responsible man and where Harris learned to “be on top of your work and learn how to be an adult.”

Aside from that, Harris loves the development and importance of self-sufficiency that Scouts helps facilitate. The ability to exercise levels of independence and choice is also refreshing; for example when deciding what merit badges to work for, what camp outs to go on, and other opportunities.

Like all other Scouts at his rank, Harris had to complete an Eagle Project, and decided to work with the Barbara Bush Literacy Foundation, organizing and collecting for a book drive. Originally, Harris strived to collect 5,000 books for the organization but blew his goal out of the water, amassing 14,000 by the end of the project. He put approximately 200 hours into the project by himself, and roughly 375 with the combined help of his father Dr. Harris. The planning process took three months as he worked with the board of directors at the Foundation to discuss the logistics and specifics of every aspect of the project, from collection to filtering the books to transportation. It is this project that also led to a period of reflection to which Harris realized one of the most important skills is resilience: that “there’s never going to be a perfect plan” and that one must “deal with issues that come up” because inevitably, they will.

What Harris will miss most is that same outdoor aspect he fell in love with in the beginning of his scouting career. Specifically, he will cherish his memories from the Northern Tier camp in Minnesota, where he canoed and backpacked the lakes and rivers bordering the U.S. and Canada.

Since 1912 and the very first Eagle Scout, Arthur Eldred, over 2.4 million young men have completed this process. Their effects on both their immediate and larger communities are apparent, through the 8.46 million hours of service in 2017, for example, and through the cultural, economic, and political impacts these men make later in their lives through their careers. Baylor even conducted a study in 2012 that found that Eagle Scouts, compared to those who never attained that rank or those who were never Scouts, exhibit higher levels of participation in healthy and recreational activities, show greater interpersonal relationship connections, engage in more environmentally-protective behavior, are committed to setting goals in all spheres of their lives, and exhibit signs of higher levels of planning and preparedness. The Boy Scouts of America, as shown by the work of these 15 seniors, is a truly formative organization which shapes young men into respectful, socially conscious and contributing individuals.