Happily Ever After: A Look at the One Acts 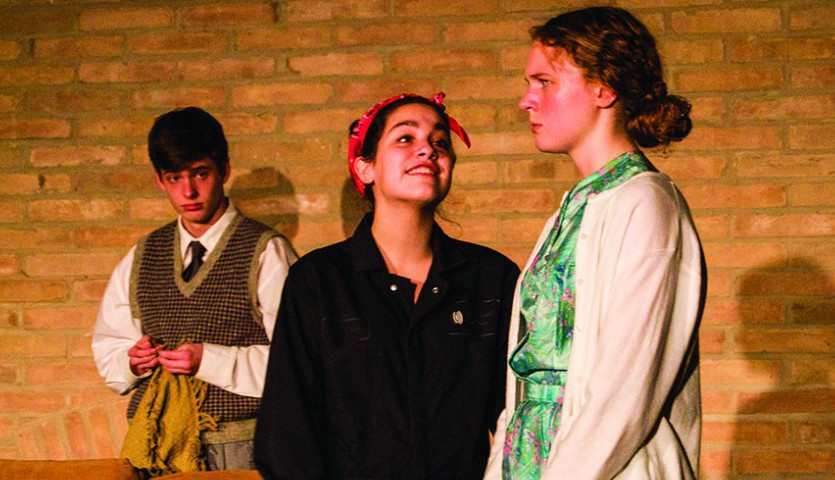 [dropcap]Length[/dropcap] does not entail success. That’s what the directors of the One Act plays kept thinking about in the weeks leading up to their big shows. In a class taught by Ms. Michelle Ludwig, seniors Allison Reynolds, Sanders Keller, and Harrison Poe each chose a one-act play suggested by Ms. Ludwig and directed them almost entirely by themselves.

Ms. Ludwig, who teaches the three-student Fourth Level Theater Directing class, served as the producer and overall coordinator for the student directors. The One Acts have continued for at least ten years, but students have only had the benefit of the Directing class for a few years. When Ms. Ludwig arrived at Kinkaid in 2012, the class was not in place, although student directed One Acts existed. She proposed the Directing class after seeing the disorganization and partial success of the system.

“There wasn’t a lot of time for me to give them guidance, so that’s when I submitted the proposal for the directing class, so that we could make sure everybody was set up to be successful,” said Ms. Ludwig.

Ms. Ludwig’s involvement with the One Acts and the Directing class was a culmination of her goal and love “to watch students take responsibility for their artistic choices.”

“It makes them better performers to understand how hard directing is. And selfishly for me, it’s rewarding because I know how hard I work as a director. So every once in a while, I’ll tell them, ‘it’s not as easy as you thought!’” said Ms. Ludwig.

The workload of putting together the One Acts is a significant responsibility for the students, so Ms. Ludwig provided guidance that the students would act on. She assisted the directors by helping them get what they need, managing the money [of the Fine Arts budget], and coordinating everything that takes place at a higher level than the directors. She added that one of the most challenging aspects of teaching the class and supporting the One Acts is “knowing when to step back and let the directors have creative control and when to step in and help them.”

It’s important to know that Ms. Ludwig did not assign the directors a certain play, but instead gave the students the independence and a great deal of autonomy. She gave the directors material to review and research. “I think it’s important as a directors to work on material that’s interesting to you and that speaks to you,” she said.

Reynolds selected her piece due to her fascination with film and directing—she wants to pursue film in college, having been interested in directing ever since she took a film class. Her piece, Funeral Parlor by Christopher Durang, was originally a film script that was adapted to a play, and only featured two characters: a strange man named Marcus who is trying to cheer up Susan, a recent widow.

“We all met in class and gave a list of [ideal] people for our roles, and then Ms. Ludwig had the final decision for who we casted,” said Reynolds of the casting process.

In the beginning, the rehearsals were not very rigorous. Stage Manager Kerry Sullivan (10), who took down blocking (instructions for actors), notes on all subjects, and in charge of lighting and props, assisted Reynolds with her production.

Poe, who directed For Whom the Southern Belle Tolls, chose his piece due to his interest in comedy and luck.

“I read it and it was the funniest thing I’d seen out of all the things I’d read,” said Poe, who has wanted to direct since his sophomore year, when he performed in another senior’s One Act. He really liked his directors that year, and that was his first experience with a student-directed production.

The play, itself a parody of Tennessee Williams’ The Glass Menagerie, was funny to Poe even though he hadn’t seen the original. For Whom the Southern Belle Tolls is about a crazy, neurotic mother named Amanda and her two sons, Lawrence and Tom. Lawrence makes up diseases in an effort to stay away from society, while Tom attempts to leave his family. The main focus of the play is Amanda trying to get Lawrence a girlfriend. The play follows the dynamics of these characters.

This year, Reynolds and Poe also collaborated together in the show Gruesome Playground Injuries. When Poe and Reynolds were both in Acting Lab II, they read the play at different times and shared similar comments that the play was “amazing” and “a beautiful piece of literature.” He liked it most because the playwright “made it very, very real” in such a short time, and Poe said he connected with the characters.

Keller directed the play Time Flies and found his inspiration early on when the selection process for pieces began. During his Speech class with Ms. Patty Edwards, students rehearsed a small portion of the One Act, and Keller has admired the writing ever since. Horus, a nerdy fly who doesn’t know how to talk to girls, meets May, a much more outgoing fly. The play shows the development of their relationship. Keller has wanted to direct for about two years, first gaining interest in Acting Lab with Ms. Ludwig, where they occasionally talked of directing. Keller’s most satisfying moments have been “the group tah-dah moments,” when the actors finally understand or conquer a challenge.

Each director had to think of ideas, organize props, costumes, buy things, organize rehearsals. But they are weren’t alone—the stage managers assisted directors in many situations, such as what people need to work, giving lines, and setting up character positions. As Keller put it, “They’re kinda like the mean parent; they keep everyone on track.”

The production did one have last trick up its sleeve that no one saw coming. Each play was performed at a different location. Funeral Parlor was in the Commons, For Whom the Southern Belle Tolls was in the Anderson Room, Time Flies was in the Brown Auditorium Lobby, and Gruesome Playground Injuries was in the Recital Hall. Congratulations One Acters!