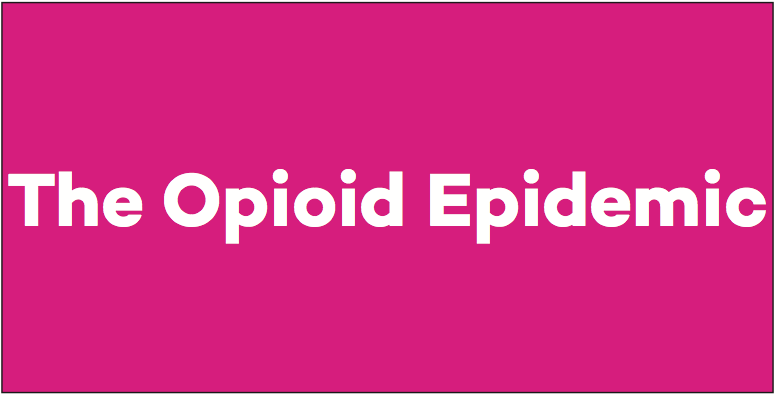 Slowly you are sinking into a blissful state. Your muscles release, warmth flows steadily through your limbs, and the world around you is already a distant dream. Life slows down and worries slip away as you drift in and out of hazy consciousness.

But the bliss comes to an abrupt end, heralding the arrival of the dark side of this chemically induced euphoria. Soon uncontrollable and painful shaking begins. Your muscles cramp and your heart rate accelerates. Goosebumps rise on your clammy skin, and waves of nausea overcome you. It’s worse than any flu you’ve had. You’re pained with desperation to end this extreme discomfort.

The only remedy? More opioids. Thousands of times every day, opioid addicts in the U.S. are feeding their desperate need. And the numbers continue to climb.

On any given day, approximately 174 people die from opioid-related causes in the U.S. According to the Harris County District Attorney’s office, opioid prescription rates within the county were at an all time high in 2017 with a staggering 79.4 prescriptions for every 100 people. The previous year, 42,249 people died nationally from opioid overdose. The number of fatalities has only increased. In Oct. 2017, the Trump administration declared the opioid epidemic a public health emergency. Although this problem is rooted in the Appalachian region, it now affects communities across the entire country, including Houston.

Opioids are highly concentrated drugs prescribed to treat mild to severe pain, often for cancer and postoperative patients. They are intended to be taken for a short time under a doctor’s supervision, but because they produce a euphoric effect they can easily lead to misuse or dependence. Opioids can be grouped into three categories: prescription pain relievers (most commonly OxyContin, Vicodin, morphine, and methadone), synthetic opioids such as fentanyl, and the illegal street drug heroin. These drugs interact with nerve cell receptors in the brain that control pain, pleasure, heart rate, sleeping, and breathing to produce pain relief and euphoria.

While these drugs can be beneficial for patients when used correctly, a subset of users can experience withdrawal symptoms in a matter of only three to four weeks from the initial use of the drug. Withdrawal symptoms are the polar opposite of the effects of a high — they are typically characterized by heightened sensitivity to pain, feelings of severe depression, and vomiting.

Lily Scheyhing, who works with the Freedom from Chemical Dependency (FCD) organization, spoke of her friend who became addicted after taking his prescribed pain medication for only five days following a surgery.

“As he was coming off [the medication], he was irritable, upset, and agitated, and he couldn’t sleep at night. He was tossing and turning, and he said, ‘What is this? I just feel terrible, and I can’t sleep.’ And I said, ‘It’s the pain medication,’” Scheyhing explained.

As patients attempt to alleviate the intense withdrawal symptoms, some will misuse their prescription — setting them on a treacherous path to addiction. This downward spiral begins when people abuse their medication by increasing the dosage, snorting or injecting the drugs, or combining their pills with other drugs or alcohol.

If addicts fail to receive a prescription from a doctor, they may take other measures to access the drugs.

“People will steal and even sell themselves into prostitution to get the medication. It has become much more difficult for folks to get prescription opioids, so people are turning to the streets to get their ‘fix’ or avoid withdrawal with heroin,” Dr. Totz said. “People buy the drug on the street, over the Internet, steal from their parents, friends, and grandparents.”

Doctors continually face the challenge of determining whether a patient is genuinely experiencing pain or just chasing a high. Many doctors have had their licenses revoked, received fines, and gone to jail for reckless over-prescription patterns.

“I’m never tentative to prescribe [painkillers] because I always have the patient’s best interest in mind. Part of our job is to relieve suffering, but the other part of our job is ‘to do no harm.’ Balancing these can be tricky at times,” said Dr. Totz.

In addition to many doctors’ efforts to prevent the misuse of opioids, the Harris County District Attorney’s Office is working to undermine the opioid epidemic by shutting down drug trafficking in Houston.

When specialized police officers receive information about carriers of drugs through their own surveillance, a confidential informant, or other intelligence, they then acquire a search warrant from the District Attorney’s office. A person transporting specifically harmful substances of at least 400 grams (equivalent to 400 splenda packets) with the intent of delivering are tried in the major narcotics division and can face 15 years to life in prison.

Drug traffickers are usually selling these drugs as a business; they are not typically the people addicted to these drugs.

Drug trafficking is a lucrative business for those who are transporting and selling the drugs, especially with the introduction of newer synthetic drugs like fentanyl.

Fentanyl is a drug prescribed by doctors in very small doses of about one milligram (equivalent to a grain of salt) because of its strength. Because the drug is created in a lab, a small amount is extremely concentrated; a dose as little as two milligrams can be lethal.

“Fentanyl is cheap — the majority of it is coming from China, and it’s much cheaper for people to buy who want to sell it. The profit margin is a lot higher with fentanyl versus other drugs, so that’s why we’ve seen a lot more of it,” Gilliam said.

One of the main reasons this epidemic is so devastating is because users are undereducated about the drugs they are taking and do not realize how dangerous and addictive they can be.

“It’s a lot more dangerous than any other drugs that are currently out there. It’s coming in as powder and people are making it into pills. They’re not doctors, they’re not pharmacists, they’re not regulated, and they don’t know how much they are putting into the pills,” Gilliam said. “The pills look like any other pills from a doctor that you would take, so you could have pills that have two milligrams of fentanyl and then a person doesn’t know what’s in it, thinks it may be one thing when it’s not, takes it, and then they overdose and die.”

As misuse becomes increasingly common, it stretches across a larger demographic. Now, opioid addiction, which was once primarily suffered by adults, has ensnared adolescents as well. More than 4,000 adolescents died from drug related overdoses in 2017, and over half of them due to opioid use.

This recent spike among teenagers has prompted some high schools to begin carrying Narcan, the drug that reverses opioid overdose. When breathing patterns slow, Narcan restores oxygen to the body, thus saving the user’s life. Even though it saves users from death, this reversal drug does not solve the underlying issue.

Most students at Kinkaid are unfamiliar with the devastating wreckage that opioid addiction brings to addicts. But sadly, some Kinkaid students have seen the consequences of opiates on a family for themselves.

“I never really understood it until I experienced what it was like to have a family member suffering from addiction,” said an anonymous Kinkaid student. “Because, of [my brother’s] addiction, there was a lot of stress put on his relationships with his family members and friends. It is not easy to have strong relationships with people suffering from addictions because all they care about is what they are addicted to. They forget that their addiction affects the people around them and makes their family members suffer as much as them.”

Disclaimer: Matthew Gilliam is the brother of Emma Gilliam, a writer of this story.