Mr. Curry: Voice of the Falcons 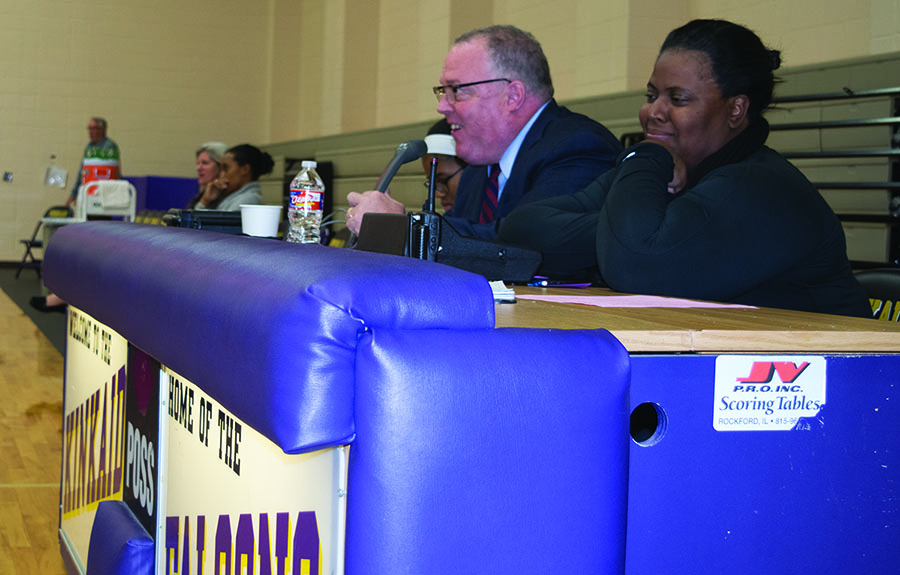 “Welcome to the Bee-YOU-ti-ful 65-acre suburban campus of the Kinkaid School, deep in the heart of Houston, Texas, where tonight YOUR Kinkaid Falcons take on the Mavericks of St. John’s in an exciting SPC counter contest,” the announcer declared at the Varsity football game, as he had for the past seven years.

Every other Friday night of the fall season at 7 p.m., Falcon fans rush to Kinkaid football game to cheer. The crowd waits for history teacher Mr. Ted Curry’s voice to boom across the field from the speakers, signaling the beginning of the game. Along with football, Mr. Curry announces for varsity basketball and track meets.

Growing up, Mr. Curry played football and basketball and ran track at Lanier Middle School. Playing at the middle school level and keeping up with the professional teams, Mr. Curry first learned the nature of sports. He then attended the High School for the Performing and Visual Arts (HSPVA) where he studied vocal music, but he did not participate in athletics in high school because his school did not offer a sports program. However, during his college years at Trinity University, Mr. Curry reentered the sports arena by participating in intramural sports, including flag football, basketball, and volleyball with his fraternity, Chi Delta Tau, in a friendly, less competitive environment. On and off the field, Mr. Curry has always surrounded himself with sports.

While Mr. Curry claims announcing sports is just a hobby compared to his teaching career, he still enjoys spending his time getting to know the players and calling their games. He took up this hobby in 1997, when he began teaching at St. John’s School. While at St. John’s, the athletic division requested help from the faculty with sporting events. Unamused and freezing as he sat on the sidelines at a middle school football game, Mr. Curry could not help but listen in anguish to the announcer in the PA box.

“I was out in the freezing cold while this guy was announcing the game with no idea what he was talking about,” Mr. Curry said. Without much experience, Mr. Curry went to the athletic director’s office and volunteered to work the PA–partly because it was warm in the box but mostly because he wanted to try it out.

During Mr. Curry’s “trial run,” he announced for Middle School and JV sports. After proving his natural ability to engage the crowd and excite the players, Mr. Curry expanded his list to include varsity football, basketball, lacrosse, and track.

When he transitioned from St. John’s to Kinkaid, he knew he wanted to continue announcing sports games, but he did not want to take the position from someone already announcing. After expressing his interest to former headmaster Mr. Don North, he began announcing for JV teams and varsity girls’ basketball, which took home the first place SPC title, during his  “audition year.” After the positive effects of his hard work and passion for the games became apparent to both the athletes and spectators, the athletic director at the time, Mr. TJ Bath, gave Mr. Curry the position to announce for varsity sports.

She added that Mr. Curry sets the atmosphere of a game “with good energy and a really good voice.” The way Mr. Curry announces sports at Kinkaid is unique because of his “Curry-isms,” such as the way he says “beautiful Barnhart Stadium.”  “He always helps bring a creative verbalization of what is going on, adding to a good atmosphere,” said Coach Marshall.

Because Mr. Curry puts so much effort into making the game environments interesting, not only does the crowd enjoy the game more, but so do the players. “The number one reason why [his commentary] helps the athletes is because he is a good announcer. He is not distracting, and he keeps the game flowing,” Head Football Coach Nathan Larned said.

He also builds relationships with the teams and he announces for. Mr. Curry said, “It puts me in contact with a broader cross section with the student section rather than just AP U.S. history. It also gives me a chance to watch people grow and improve through the entire course of their high school career.”

Because he cares so much about the players on and off the field and court, Mr. Curry shows that he’s really passionate about announcing sports and getting to know the players.

Mr. Curry said that football and basketball are tied for first on his list of favorite sports to announce. During football games, he sits in the PA box above the field without much of a perspective of the crowd and student section. In basketball, however, Mr. Curry sits at half-court, surrounded by all of the action.

During the basketball game versus Episcopal High School a few years ago, Mr. Curry recalls a player’s mother sitting right behind him, cheering and screaming the entire game. He said he missed that from the stadium box: “You don’t get that intimacy in football because you are not there in the action.”

Curry looks at the opportunity to announce lacrosse games with a positive, exciting mindset. He said the nature of the lacrosse games is very different from the other sports he announces for. For example, while announcing St. John’s boys’ varsity lacrosse games, Mr. Curry was once threatened by a mom of an opposing team in the parking lot. On another occasion, a mother from another high school tried to climb into the PA box.

“I don’t know what about lacrosse makes people so crazy,” said Mr. Curry, laughing. Despite this, Curry said he loves the energy of the lacrosse games and is excited to announce for Kinkaid.

Throughout his sports announcing career, Mr. Curry is proud to have made only a few mistakes. One vivid memory he said that is etched in his mind occurred at St. Johns, during the first football game after their mascot changed from the Rebels to the Mavericks.

“I called for the Rebels five or six times during the first half of the game until finally, at halftime the headmaster came up to the PA box and said, ‘I don’t know if you missed the memo, but we’re not the Rebels anymore,” said Mr. Curry.

Despite his love for and dedication to the “Voice of the Falcons,” Mr. Curry, has taken up other commitments and said that he might not be able to continue announcing for Kinkaid sports much longer.

If other teachers or students are interested in assisting him with the job, he encourages them to try it out. He suggested that students should start live Internet broadcasting the games again as they did when he entered Kinkaid. He also put an offer in the Kinkaid Auction years ago for a student to announce the first half of the Episcopal game in order to give students the opportunity to experience the game from a different perspective.

The players and spectators seem to enjoy Mr. Curry’s exciting additions to the game environment at Kinkaid. Varsity basketball player Chloe Hunter (11) said, “Mr. Curry does a really good job keeping up with the players on and off the court. His friendly attitude and passion while announcing the games make them more interesting and exciting for everyone.”