A New Take on Education 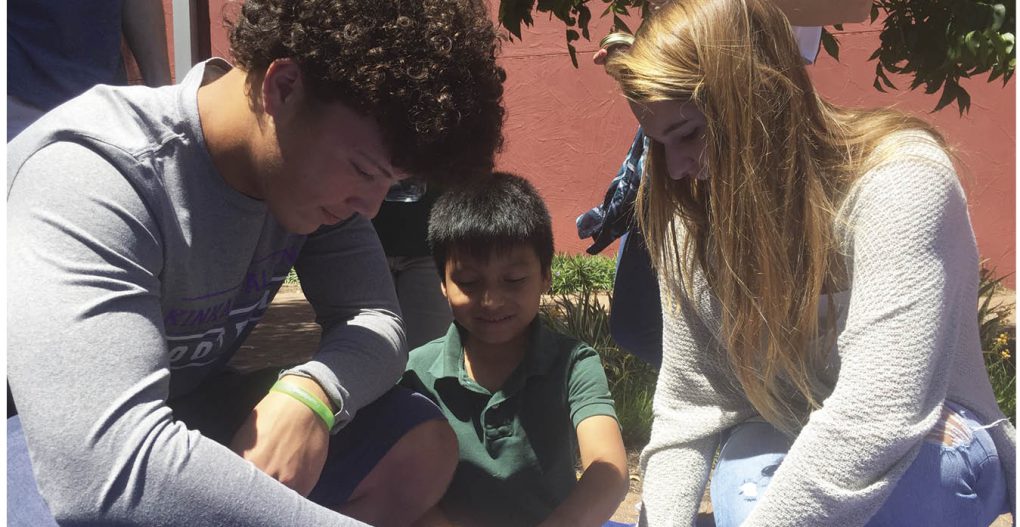 Service learning, a concept combining a rich educational experience with community aid, has made its way into the Kinkaid community as teachers modify this idea to fit the literary lessons in their individual classes.

Based on research and feedback received from other schools, English teacher Ms. Casey Fleming said, “Service learning works better than strict community service because it integrates a service experience into the education that students are already having in the classroom … it also meets a need in the community causing a reciprocal relationship where the students are learning while a community need is being met.”

Ms. Fleming and fellow English teacher Dr. Tara McDonald Johnson described the process of creating a service learning project in three steps: assess the needs of those being served, assess the students’ needs and the teachers’ curriculum, and find common ground in which both groups benefit. The first three service learning projects worked with Baker Ripley School. Ms. Fleming said,“Baker Ripley wants their students to always have experience with students from ‘another world.’ Students that are from a different class, different social and economic bracket.” Therefore, Baker Ripley opened itself up as the perfect place for Kinkaid students to learn and serve.

The first attempt at service learning in the Kinkaid community was taught by Community Service Coordinator Ms. Tatum Branaman and Ms. Fleming last January during Interim Term. As a part of the “World Map Project” students created a two-scale world map mural with the kids at Baker Ripley and then gave them the mural as a gift. After this project was deemed successful, Ms. Fleming encouraged Ms. Branaman to pitch the idea to the English department first because “English, in some ways, lends itself to service learning due to the amount of novels and books that English classes read that have issues students could address in their communities” said Ms. Fleming.

Dr. McDonald Johnson picked up this concept and led the first project in a classroom of junior English students. They were reading The Great Gatsby which is narrated by a man exploring New York City while criticising yet celebrating the diversity of different “types” of Americans living the American Dream. Dr. McDonald Johnson wanted to reinforce the concept of diversity of experiences. She said they decided to “take a trip to the most diverse neighborhood in the most diverse city in the United States: Baker Ripley in Houston.”

TX Harris (12) reflected on his experience at Baker Ripley saying that his service learning experience was “more effective than the classroom because we were able to learn about people and things I would’ve never had the chance to in the normal classroom setting. ”

Following Dr. McDonald Johnson’s project, the English Department Chair, Mrs. Kate Lambert, and Ms. Fleming decided to take their ninth graders to Baker Ripley between the transition of reading The Bean Trees and starting the poetry unit.  Two of the The Bean Trees major themes focus on individual’s dependency on one another as well as a connection to nature.

Baker Ripley’s kindergarten students were learning about plant and animal life by building a classroom pond. Each freshman at Kinkaid was paired with a kindergartener from Baker Ripley as they spent two days together building terrariums, playing games and ultimately writing a “renga,” a Japanese form of a collaborative poem. In reflection of her project, Ms. Fleming said this ending of the novel and unique opportunity to teach poetry in a new way supplied them with a perfect occasion.

The most recent service learning project to take effect in the Kinkaid community was led by Mrs. Lambert and her AP Shakespeare class, which has been studying King Lear, a Shakespearean tragedy focusing on an aging king who gives up his throne and is then faced with the feelings of aimlessness.

Mrs. Lambert said that the challenge of aging is something that most high school students struggle to grasp. Mrs. Lambert had a desire for all of her students to understand King Lear’s struggles to be possible through the same experience, so she planned a service learning day at Belmont Village for Senior Living. Mrs. Lambert said that her goal for the event was “to bring value back into the lives of the residents of Belmont and remind them how filled with purpose their lives were. Also, for my students to be reminded that the elderly did live very purposeful lives and the ache that comes when that is missing is hard to cope with.” Mrs. Lambert challenged her students with this question: As Americans, what is our responsibility to the elderly to make their last years happy?

In preparation for the event, Grace Manes (12) said, “Two representatives from Belmont led a short training workshop during class. It was really interesting because we learned about the effects of aging first-hand by participating in activities that simulated some of the health restrictions that come as a part of aging. We also did a few mental exercises that allowed us to place ourselves in an elderly person’s position and gave us a clearer look at their experiences.”

While at Belmont, students led an icebreaker to get conversation flowing and learn interesting or unusual facts about the people at Belmont. They then met up with their senior buddy and ate lunch to get to know their buddies and celebrate the fascinating things that they accomplished or took part in during their lifetime. Following the day at Belmont, students wrote a sonnet, a fourteen line poem and the one that Shakespeare is most famous for.