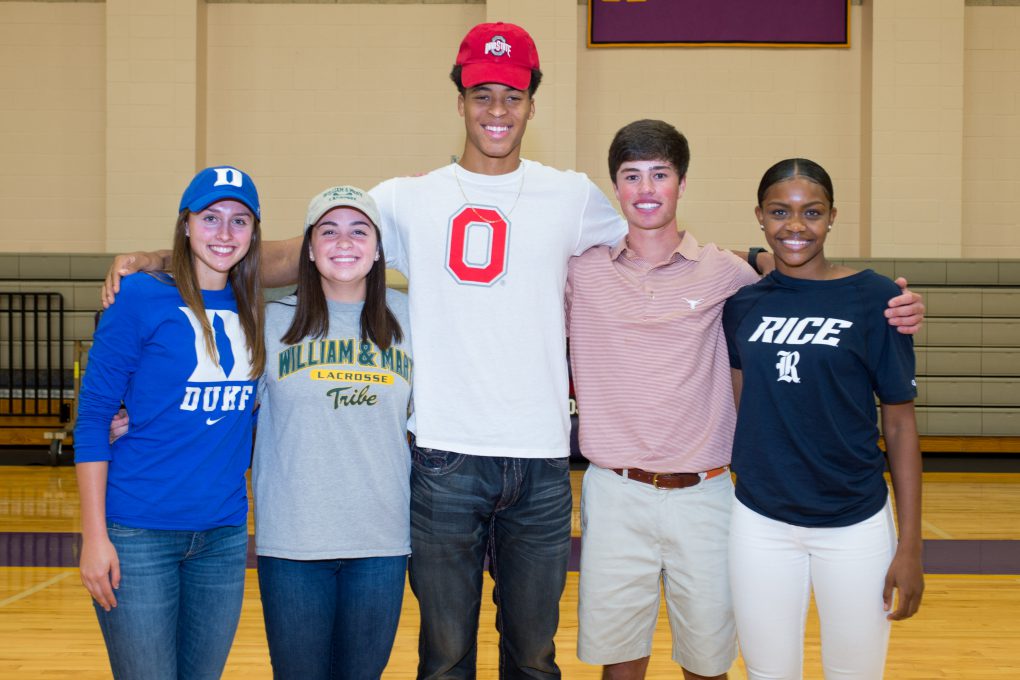 On Wednesday, Nov. 8, five Kinkaid seniors signed their letters of intent to play sports at the Division 1 collegiate level. Each of the students were seated with their families at their own booths, fully decorated with balloons, posters, and pennants. Across from them, the gym’s bleachers were full of students and supporters who came out to support these athletes in their big moment. These seniors included Cole Hammer, Caroline Hanan, Jae LeDee, Belle Martire, and Jasmine Smith.

Cole Hammer began playing golf at age three and always dreamed of going to the University of Texas. “I always had ambitions to be a collegiate athlete, but it wasn’t until seventh grade that I decided that golf would be my primary sport,” he said. Hammer had also been very active in baseball. Cole received his first offer to play collegiate golf in eighth grade. Coaches watched him at various tournaments in seventh and eighth grade, and after one visit to SMU and two visits to UT, he knew which choice to make. Cole was relieved to sign, because he had been looking forward to this day since he first committed in eighth grade. He said his favorite moment throughout his golf and recruiting career so far was playing in the 2015 US Open. He plans to play professionally after college.

Caroline Hanan began playing club field hockey at the end of eighth grade. She knew by her freshman year that she wanted to play in college. Her first offer came in the spring of her sophomore year, followed by her offer from Duke. Later that spring, after her unofficial visit at Duke, she knew it was where she wanted to go. Hanan said that a school that was strong in both academics and athletics was important to Hanan; being surrounded by good coaches and players was also a major factor in her decision. In order to be seen by recruiters, Hanan attended many showcase tournaments and sent emails to colleges she was interested in. During her sophomore year, she began going to clinics and on unofficial visits, and that was when her offers came rolling in. Hanan said that her favorite moment was when, “I called my coach and he answered; I hung up before I got to the point that I was accepting the offer. I had to call them back and explain myself. In retrospect, it is funny, but at the time it was very embarrassing.” Hanan really enjoyed getting to know other players across the country and making new friendships throughout the process. She does not plan on playing field hockey after college.

Jae LeDee received his first offer in eighth grade. Ohio State, the school he ultimately chose, offered him a scholarship in his sophomore year. LeDee has been playing basketball since fourth grade, and by fifth grade, he knew he wanted to be a collegiate athlete.  He chose Ohio State his senior year, and his decision came through discussions with his family over time.  LeDee said that the recruiting process was long yet fun, and he loved it.  After five long years of debating offers, LeDee said it felt great to finally sign. He added that his favorite thing about the recruiting process was all the coaches and schools pursuing him  the years.  He plans to play basketball professionally after college.

Jasmine Smith began playing basketball in fifth grade, and she knew from the beginning that she wanted to play in college. She received her first offer at the beginning of her freshman year, but Rice, the college she chose, didn’t offer her a spot on their roster until the summer after her freshman year.  It took her until the next summer to decide that Rice was the place for her. “Academia was important when choosing a school. I knew I wanted to be a part of the Rice Family with my coaches and teammates after visiting them the first time. It’s sort of a gut feeling; I couldn’t see myself at another school,” said Smith. The recruiting process was pretty hectic for Smith, as she was always on the phone talking to a coach. She said she was relieved and happy on signing day, as this meant she had finally gotten into college. Her favorite part of the whole process was seeing how proud everyone was after she committed. She is unsure of whether or not she will play professionally after college.

Belle Martire received her first offer at the beginning of her sophomore year. William and Mary, the school she eventually chose, made her an offer the summer after her sophomore year. She began playing lacrosse when she was five years old, and she knew by middle school that she wanted to play in college. “I fell in love with W&M the second I stepped on campus, and immediately knew it was where I wanted to go,” said Martire.  The recruiting process was full of emails, phone calls, travel, and camps for Martire. She was so excited to finally join the Tribe on signing day. Her favorite moment was the day W&M offered her, as she knew all her hard work finally paid off.  She does not plan on playing lacrosse after she graduates college.