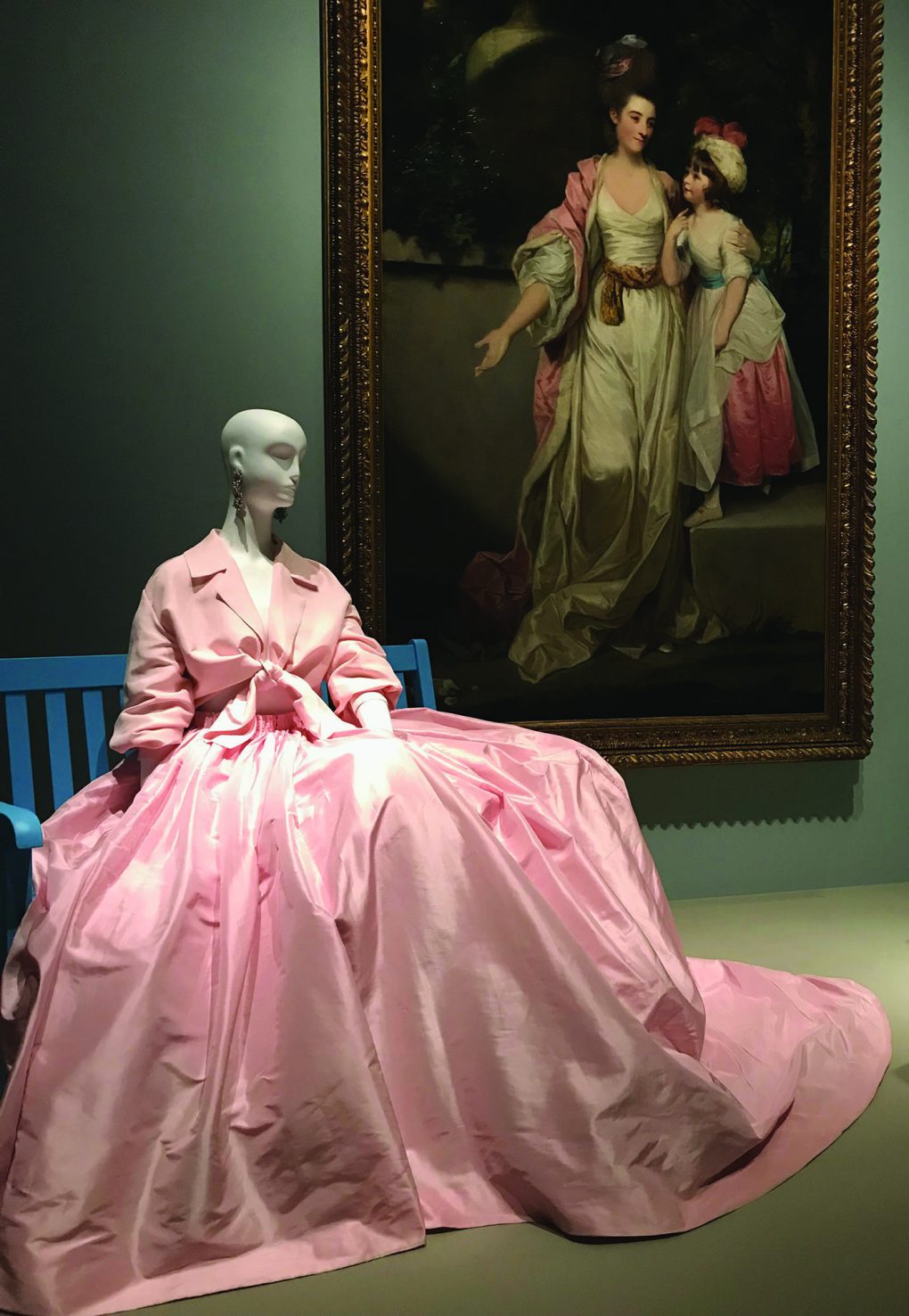 For decades, he captivated women with his beautiful clothing ranging from wedding dresses to Met Gala gowns. His dresses have appeared on royalty, celebrities, and ordinary women alike.

He dabbled in different styles, but never failed to create a comfortable, feminine dress that looked and felt good for all women. Esteemed fashion designer Oscar de la Renta created stunning, intricate dresses, and his legacy is honored and remembered at Houston’s Museum of Fine Arts new exhibition, The Glamour and Romance of Oscar de la Renta.

The collection features almost 70 of de la Renta’s ensembles beautifully staged and open for public viewing. These pieces allow viewers to descend into the world of fashion.

Four different rooms separate the dresses by design and influence. Entering the exhibit, viewers step into a yellow room filled with dresses with a Spanish influence. De la Renta, originally from the Dominican Republic, first studied in Spain in 1950 as a painter at the Real Academia de Bella Artes de San Fernando. While in school, de la Renta would sketch dresses for fashion houses to make money. The U.S. Spanish ambassador’s wife noticed one of his designs and commissioned him to make a dress for her daughter, which featured on the cover of Life magazine in July 1956.

The acclaimed feature skyrocketed him into the world of fashion and design. De la Renta was first hired to draw sketches for clients by the couture house of Cristóbal Balenciaga. Balenciaga, considered to be the “King of Fashion,” drew from Spanish cultural events such as bullfights and the flamenco and taught de la Renta to do the same. De la Renta also drew from the color palettes, patterns, and ideas found in the paintings of El Greco, Francisco de Zurbarán, and Juan Pantoja de la Cruz. This first room displays bold red ruffles, gold beading, and Spanish styled hats and accessories. The 11 dresses are centered in the middle of the room and allow the viewer to walk around and see them from all different angles.

The next room is a deep red, presenting dresses inspired by cultures from around the world, not just Spain. It features pieces from his collections “The Road of Spices” and “Oscar’s Arabian Nights.” his room is filled with silks, fur linings, feathers, and orange, brown, and various shades of black. Many of the dresses have exquisite beading curling into patterns and creating interesting shapes. Also displayed are robe-like dresses made of silk and chiffon, inspired by harem pants, caftans, and chenograms. A quote from de la Renta near the entrance reads, “I have always been attracted to the exotic, no question about it. I would always look at folklore and how people were dressed in different cultures … that’s what fascinates me.”

The third room is drastically different from the previous two; as the viewer steps in, he or she is transported to de la Renta’s Dominican Republic gardens, which are projected against the pale green walls. The perfectly trimmed hedges and abundant flowers complement the picturesque and serene atmosphere. De la Renta loved and cared immensely for his gardens in Punta Cana and at his Connecticut home; he worked hard to have a hands-on approach in his gardens. Also in this room is what many consider to be the crown jewel of the exhibit: Amal Alamuddin Clooney’s wedding dress. Made of French lace, hand-embroidered pearls, and sparkling sequins, Clooney’s dress was the last wedding gown de la Renta designed before his death less than a month after the Clooneys were married. Next to Clooney’s dress is de la Renta’s stepdaughter’s wedding dress, an arguably just as beautiful though simpler dress made of hand-embroidered silk organza with scattered tiny lace flowers.

In the center of the garden room is a Marie Antoinette inspired silk, striped dress with a short hoop skirt. This dress demonstrates de la Renta’s emphasis of muted pastel colors, floral patterns inspired by French textiles, and other French-like designs and dress styles. The next ensemble is a flowing pale pink two-piece outfit with a full skirt and a blouse, tying in the front. Behind the ensemble, Sir Joshua Reynolds’ 1777 “Portrait of Mrs. Jelf Powis and her Daughter” hangs in the background, once again showing the museum’s mix of art and fashion. Next to it stands a fitted blue and green striped and ruffle robe with matching pants made from silk chiné taffeta. Made for the 1998 Spring/Summer collection, it is paired with matching Manolo Blahnik shoes of the same fabric. Also featured in the room is a pink tulle dress and hat, several floral dresses with large bows, and more subtle floral features in two blue dresses.

The final room is a “red carpet” room, featuring the gowns of many famous celebrities, socialites, and public figures. These icons are centered around a striking navy dress filled with golden shooting stars rotating in a circle. Taylor Swift’s pale pink low-V backed dress with a large bow from the 2014 Met Gala is on display along with dresses designed for Karlie Kloss, Penelope Cruz, Allison Sarofim, and Laura Bush. Another Marie Antoinette inspired dress, worn by Kirsten Dunst in Vogue, features pale blue and cream chiné taffeta with a ruffled train and silk ribboned bodice. The dress was used to promote Dunst’s Marie Antoinette movie and photographed by Annie Leibovitz. The dresses in this section are almost too complex to describe; you have to see them to believe them and fully comprehend the beauty of de la Renta’s extraordinary work.

The Museum of Fine Arts will be displaying this exhibition until Jan. 8. Tickets are $20 for students and include an audio guide explaining some of the dresses as well as information regarding de la Renta’s life, style, and influences.