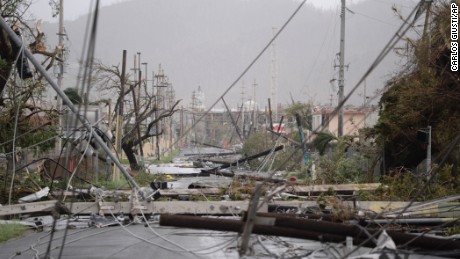 It took President Trump two weeks after Hurricane Maria to fly to the island and throw paper towels at U.S. citizens at a hurricane relief distribution center in San Juan, Puerto Rico. People are dying, in need of supplies, food and water, and Trump gleefully tossed around paper towel rolls, making this whole situation almost seem like a joke.

Hurricane Maria struck Puerto Rico as a category 5 storm on Sept. 20, leaving Puerto Rico and many of the Dominican Islands devastated. The Islands were left with a death toll of 51 as of Oct. 31, and according to CNN, Puerto Rico could reach up to $95 billion in damage. Since then, people have been roaming the streets with no idea of what happened to their homes, families, or where to receive help and supplies.

President Trump has failed to provide relief for Puerto Rico’s catastrophic damage. Instead, Trump attacked the Mayor of San Juan Carmen Yulín Cruz just a week and a half after the storm. Trump sent out 18 tweets within an 11-hour period, criticizing and attacking Cruz for her “poor leadership ability… and others in Puerto Rico, who are not able to get their workers to help.”

Trump has made constant excuses as to why it is hard to help Puerto Rico. Instead of conducting relief efforts, he spent his weekend playing golf. He made a meaningless gesture by donating his golf trophy to Puerto Rico. After his trip to the island on Oct. 3, Trump commented on Twitter that this whole situation and the pleas for help that the U.S. is receiving is just because the Puerto Ricans “want everything to be done for them.” Contradictory to the president’s statements, Mike Pence pledged to help Puerto Rico “every step of the way” in the task of rebuilding all that is wrecked.

Instead of concerning himself with efforts to rebuild Puerto Rico, Trump is concerned with riling up his base, and will attack anyone or anything in order to make himself look better. He blames everyone else but himself, especially denigrating the efforts made by Cruz. She is working day and night, rescuing families out in the streets to get to a safe place, to help her home and people recover everything they lost, but Trump is not giving her or Puerto Rico nearly the amount of help that is needed.

Trump tweeted that the Federal Emergency Management Agency (FEMA) and aid workers cannot “stay there forever”; however, Texas and Florida, two states also recently affected by the Hurricanes, and also two states that Trump won during the Presidential election, were given generous and ongoing aid. During the days and weeks after Maria, Trump sent out multiple tweets stating “We are with you today, we are with you tomorrow, and we will be with you EVERY SINGLE DAY AFTER, to restore, recover, and REBUILD!”

He not-so-subtly implied that Maria is not a true catastrophe, and insinuates that Puerto Ricans should not be complaining because they are not a “real catastrophe.” But Maria should be taken just as seriously, because if given the opportunity to save thousands of lives, any person would take the chance. Officials say that the residents could be without power for the next 10 months. Hurricane Maria was devastating to the island of Puerto Rico.

Kami Ruiz-Rodriguez (12) has relatives in Puerto Rico who were affected greatly by Hurricane Maria. She says “We were terrified for over two weeks because we didn’t hear from anyone. We kept seeing pictures of my great-grandmother’s neighborhood flooded and destroyed but we didn’t know if she was okay. There was at least 5 feet of water in her house.”

Trump can redeem himself by pushing for Puerto Rican statehood. In 1917, citizens of Puerto Rico became U.S. citizens under the Jones-Shafroth Act, passed because the U.S. wanted to deploy Puerto Ricans into World War I. As time went on, Puerto Rico continued to be a part of the U.S., and although they wanted to become a state of the United States, they have not been able to vote in Congress nor vote for the President. With a population of 3.4 million, Puerto Rico has a larger population than 21 other U.S. states with 3.4 million, and if ranked with U.S. states, it would be the 37th for domestic gross product. Just a few months before Maria, Puerto Rico was ardently pushing Congress to grant it statehood. Justice Sonia Sotomayor, whose parents are from Puerto Rico, and sits on the Supreme Court said, “It’s very unlikely that statehood will ever happen, at least not in our lifetimes, unless something in the political culture of the U.S. Congress shifts radically to suddenly embrace Latin Americans, Latinos, and Puerto Ricans,” she said. “And I don’t think we’re going that direction.”Annexing Puerto Rico is something that has long been overdue, and especially now, when they are in such a time of desperate need. If Puerto Rico becomes an official state of the U.S., aid will be given without having to overturn decrees and documents issued against helping Puerto Rico.

Puerto Rico Governor Ricardo Rossello said, “How can we still have a colonial territory with more than 3 million citizens that don’t have access to the same rights and the same political power?” President Trump and his administration should be concerned with what needs to be done in order to be of service to the devastation of Puerto Rico. It took Trump eight full days to make it over to San Juan, and the five hours he did spend there resulted in Trump tossing paper-towel rolls into crowds. Puerto Rico has given everything to the U.S.; it is time to return the favor.