From the other side of a 66-year-old rivalry 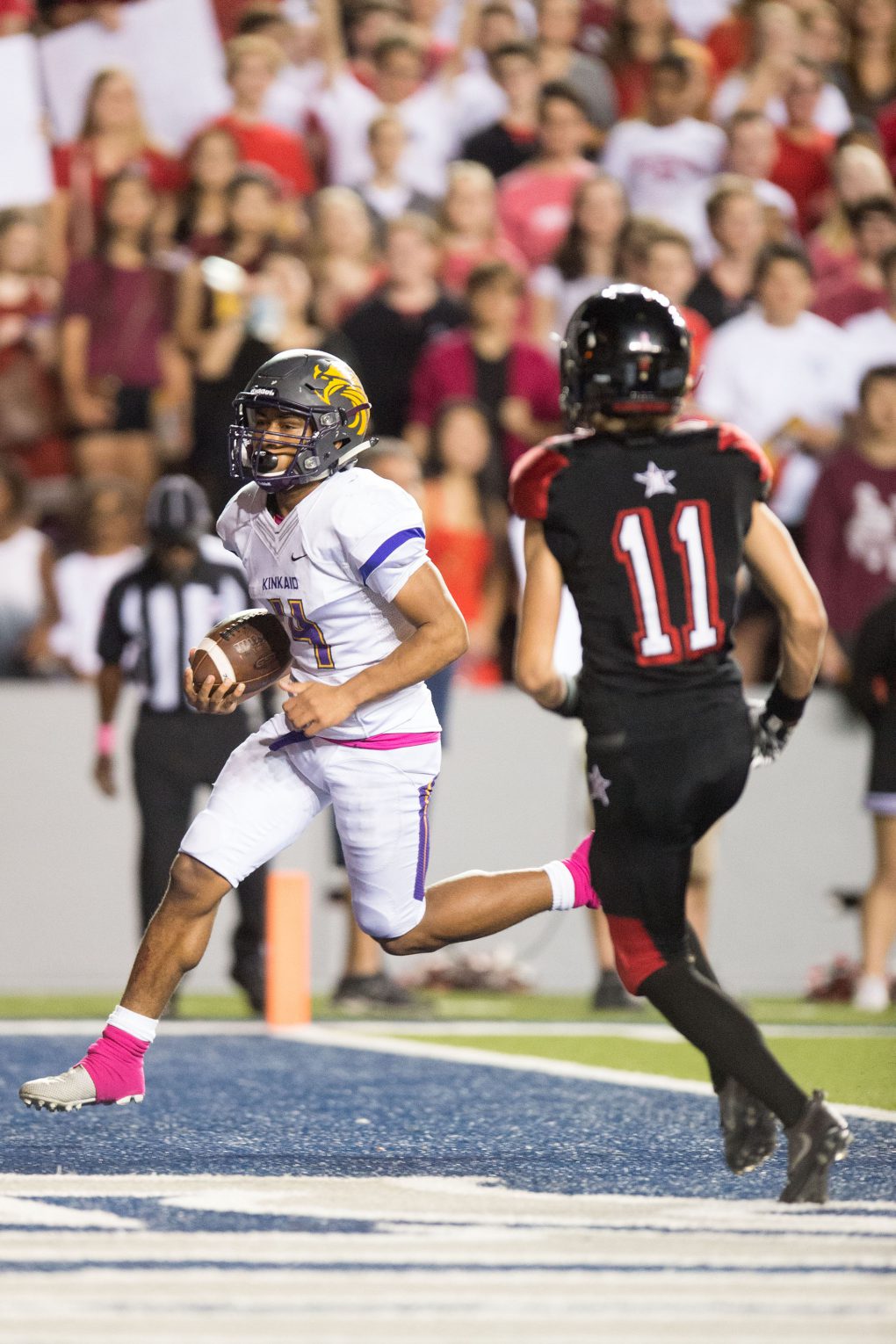 Car doors slam as fans dressed in varying shades of purple and gold or red and black make their way across opposite sides of the parking lot. The smell of grilling hamburgers from the Falcon Family Feast drift up into the sherbet sky. Two mascots–a Falcon and a Maverick–greet game-goers at the gates as music blares. It’s 7 p.m. on a Friday night at Rice Stadium, and the oldest independent school football rivalry game is about to begin.

The historic Kinkaid-St. John’s rivalry game played at Rice Stadium is a fan favorite. The rivalry has been around since 1951, when the Kinkaid and St. John’s football teams first faced off. The game permanently moved to Rice Stadium in 1979 due to the overwhelming crowds that were too large for either school’s stadium. At Kinkaid, students prepare for the game with theme dress days during SOK Week when the Spirit of Kinkaid Club decorates the school for the game, transforming it into a Kinkaid wonderland.

SOK Week gives students a chance to dress for spirit days such as “Mock the Mavs” (a tradition that is limited to seniors) or, new this year, “Spook the Mavs.” Kinkaid students know and love this week, but how do our rivals from inside the 610 loop prepare?

Mr. Ted Curry, current AP U.S. History and AP Government teacher at Kinkaid and former administrator at St. John’s said, “Over at St. John’s, they take it more seriously. I mean, they go nuts. They reduce the number of school days with parent-teacher conferences, and back when I was there, the seniors would spend the night at the school. In order to keep the St. John’s kids from wrecking the Kinkaid campus, the school allowed the seniors to toilet-paper the St. John’s campus.”

Curry remembers, “the all school pep rally is over-the-top, especially the cheerleaders’ entrance into the pep rally. While I was there, I saw them come in on elephants, camels, Harley-Davidson’s, police cars, and firetrucks. One year, they came in on a helicopter.”

Ms. Tamasine Ellis attended and graduated from St. John’s as a student and now teaches U.S. History here at Kinkaid. She said, “My favorite memory was my first game in 1985. It rained and it was cold, but I got to wear my Halloween costume under a black trash bag and hang out with all of my friends. I remember thinking that was incredibly fun.”

Ms. Ellis remembers this week as the most exciting for all of the sports’ teams. She said, “I played field hockey, and we always saw Kinkaid as the ultimate competitor, so there was a lot of excitement about all of the games, especially the field hockey game for me and the football game on Friday. At St. John’s, you had to wear a uniform all of the time, and the Friday of the game was the only day you could wear street clothes – it was red and black day.”

She describes how her experience with the game has changed as a Kinkaid teacher: “Now my allegiance is shifted. It’s a point of pride to see the students I work with every day be successful. I don’t think I’ve missed a single game as a teacher, and at this point I have attended more games on the Kinkaid side than on the St. John’s side. Sitting in the stands is a lot more fun since you see a lot of students that have come back.”

St. John’s student and football player, Genson Hooper-Price (11), touched on the importance of the decades-old rivalry: “It’s an honor to be a part of the Kinkaid-St. John’s rivalry. When I play against Kinkaid, it’s no longer about me or the current team that I’m playing on. It’s about my school, every alum, every donor, and every single football player to represent St. John’s. The Kinkaid-St. John’s rivalry is an integral part of [both] schools’ history, and it’s a great opportunity and honor to be a part of that history.”

When asked how the St. John’s football team prepares for the Kinkaid game, Head Football Coach Steve Gleaves said “we usually do everything possible to try and keep our routine the same. That being said, it is not a normal week all the way around. The school days are different with Monday evening being the Homecoming Dance, Tuesday having no school for parent/teacher conferences, Thursday having the all-school pep rally, and Friday having the US pep rally.” At St. John’s, Coach Gleaves noted that “the biggest thing the coaches need to do is try and keep the players focused on the real issue, and that is getting ready to play the game on Friday night. So again, we try to keep practice as normal as possible with our weekly routine of preparation.”

As for Kinkaid, the varsity football team had similar things to say.  Ameer Mustafa (11) said, “Sometimes we have to change up our [game plan] a bit for St John’s, but normally we just play Kinkaid football. It’s a big rivalry game that has two schools competing to show who is the ‘alpha dog.’ It’s always a great game, crowd, and atmosphere.” Mustafa says his favorite memory from a St. John’s-Kinkaid game was after a victory when the team “went back to the locker room and someone put on ‘Scatman’ [by Scatman John] and everyone starting dancing.”

Last year, the Falcons overcame the Mavericks, winning 42 to 9. Josh Williams (11), running back for Kinkaid, excelled in that game, scoring four touchdowns and rushing for nearly 200 yards. Josh said, “It feels amazing–just the feeling, the thought, the knowledge that you are playing in a rivalry game that has been going on for so many years. It’s just an amazing feeling to know that you are part of history.”

Zach Daniel (11), quarterback for the Falcons, said his favorite St. John’s game memory was his “first game starting on varsity” because he “scored three touchdowns.” The history of this seasoned matchup is undeniable. And though tensions will run high at the game on that chilly November night, it is clear that this game is more than four quarters. It’s a celebration of passion, competition, and tradition that stretches back sixty-six years and will extend far into the future.