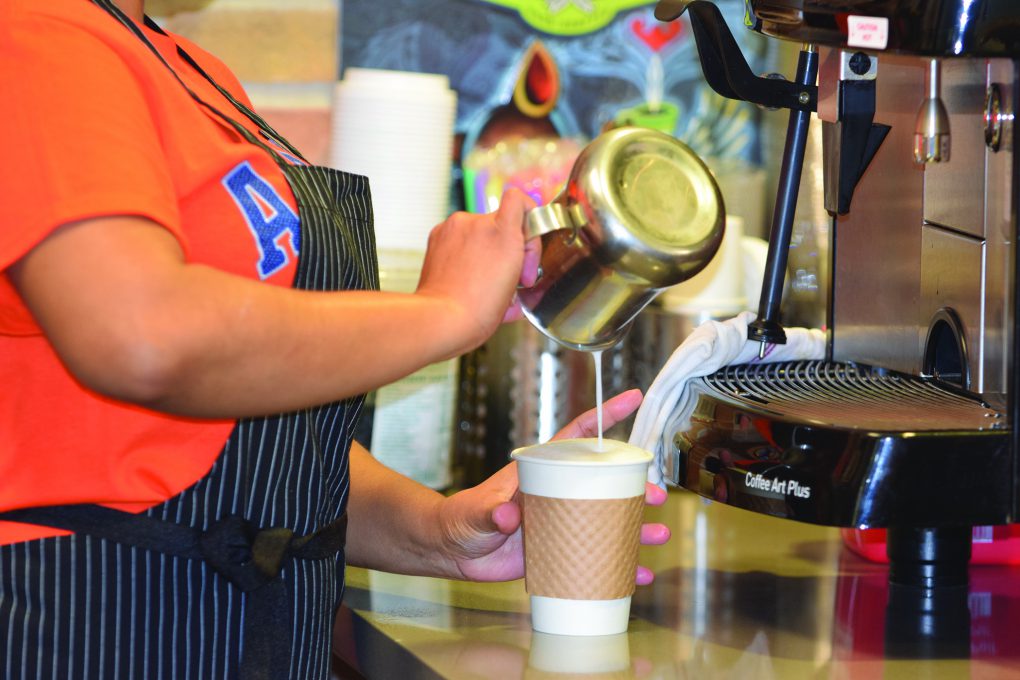 At 6 a.m., the Falcon Fuel lights turn on and Dina Ramirez starts to blend smoothies, fill the refrigerator case with pastries, and pour the coffee beans into the machines, quickly preparing for the stream of students and faculty that will soon swarm the coffee bar.

More than three years ago when the planning of the Dining and Learning Center began, Kinkaid’s Head Chef Mark Harris and a large team of contributors, consisting of individuals with ties to Kinkaid community, made the decision to add a coffee bar to the new cafeteria designs. One member of the team was Chris Pappas, co-owner of Pappas Restaurant chain and long-time supporter of the Kinkaid community.

Chef Harris said he “thought it would be a fun option for the students and faculty, especially for the upper school students,” since the old cafeteria only had a soda machine and tea dispensers.

Dedicated to providing the same services as the average coffee shop, Chef Harris and his team “took the Starbucks menu, cut it in half, and have been slowly adding more and more things as time [went] on.” This year, they added the slushies and bubble tea drinks to appeal to a larger crowd such as the middle schoolers, who are not allowed to purchase coffee. Falcon Fuel was a success from the beginning: on average, 425 transactions are made at Falcon Fuel every day, including all student and faculty charges.

For the coffee bar to run smoothly, Chris Pappas provided a barista from his restaurant chain to train the school baristas. The Pappas barista trained new Sage team member Ms. Dina Ramirez, the main barista of Falcon Fuel, along with other Kinkaid staff members like barista partner Mercedes Campos.

Ramirez said she had to learn all the recipes and details of running the coffee bar in a limited amount of time with the Pappas barista. In the beginning she had to work alone and said, “It wasn’t easy because I had three hours of training, and I had to know every recipe.” Ramirez says the recipes are similar “except for the caramel macchiato because it has more ingredients and [she] has to use the machine twice” as opposed to the “other recipes that just need milk and coffee.”

She now has her own rhythm and can work alone, but likes to have a partner when there is a rush of students. Ramirez recognizes her regulars, but she doesn’t know everyone’s names.

Meredith Huston (10) is one of Falcon Fuel’s frequent visitors who goes at least three times in one day: morning, lunch, and after-school. Huston is a self-proclaimed coffee addict who normally has four cups of coffee a day. She said, “It tastes richer [and it feels like] it has more caffeine than a regular Starbucks would.” Huston’s go-to – an iced black coffee – is an unpopular choice compared to what the rest of the student body orders.

Most students will choose to drink either an iced coffee or a smoothie while, students overwhelmingly favored chocolate chip muffins and brownies out of the baked goods. Out of 226 responses to a student survey, 64% go to Falcon Fuel at least two times a week; proving that it is a popular spot in the cafeteria and an overall success for Chef Harris.

As a result of this popularity, Chef Harris wonders what people would think of loyalty cards: punch cards that mark every purchase and give a reward after a specific amount. When asked, the majority of the student body provided positive feedback; only 18 of the student responses say they would not use the punch card.

He said, “We’re thinking about [having] gift cards, [that will available to everyone] because some of the department heads have said they would love to buy gift cards to give out to their faculty members.”

Chef Harris hopes to introduce the new ideas as soon as possible depending on the responses of the community.