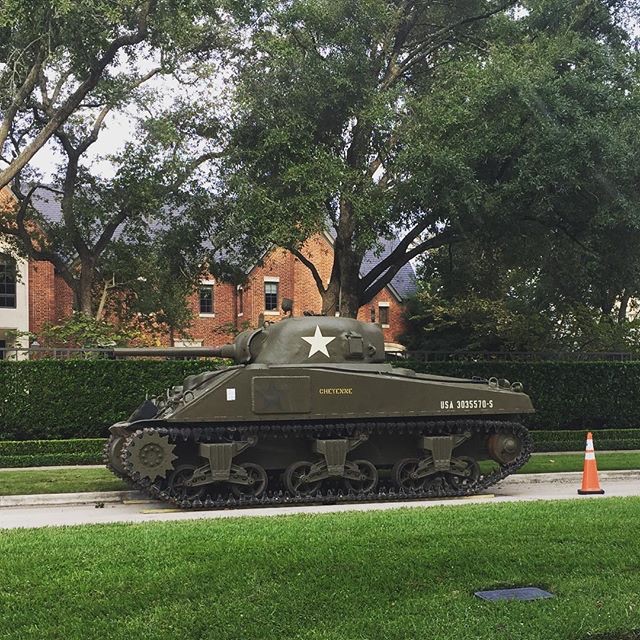 River Oaks Boulevard has been known in Houston for its million dollar mansions and exquisite landscapes, but on Sept. 31 it became known for something else: a World War II Tank. Attorney Tony Buzbee, who lives on River Oaks Boulevard, is the owner of the grand vehicle. Due to his successful law practice, he was able to buy the tank for $600,000. Buzbee served in the US military and has alway been a World War II buff.

Many Houstonians were curious about why Buzbee decided to buy the tank, so he wrote a public message that explains the history behind the tank. Buzbee said that the tank “landed at Normandy. It liberated Paris and ultimately went all the way to Berlin.”

The tank caused controversy throughout the River Oaks neighborhood while it was parked on River Oaks Boulevard. Many neighbors delighted in seeing the tank, knowing the history that it holds, but others were concerned about the potential problems the tank may cause.

One of the problems is traffic. The tank had caused backup and traffic not only because it was taking up space in the street, but it was also attracting people to stop, park their cars, and take photos of it. These parked cars behind the tank were just adding to the normal traffic problems. Kids were also seen climbing the tank, causing neighbors to also be concerned about the potential safety issues the tank opposed.

These concerns ultimately led to the River Oaks Property Owners group sending a letter to Buzbee. In the letter the homeowners association addressed the potential the tank has in causing traffic and safety problems. In an interview outside his home, in response to these concerns, Buzbee said, “If you’re offended just lighten up, my goodness it isn’t hurting anyone.”

Despite Buzbee claiming that there is no legal issue preventing him from having the tank parked in front of his house, to help reduce traffic, Buzbee eventually moved the tank to an adjacent street, Del Monte Drive.

After several warnings, officers began ticketing the tank every two days it was parked outside his house. In response to the ticketing Buzbee posted a sign on the tank. The sign addressed his legal precedent to have the tank in front of his property and warned the police officers that if they were going to be in law enforcement they should, “read the city codes. The definition of a large vehicle as set forth in the Houston municipal is set forth below. Do you want to take a wild guess whether this tank qualifies as a large vehicle under the definition in the code?”

Underneath this question, he had the code listed and a message that revealed  when and where he would be moving his tank. On Oct. 15, he moved the tank to his ranch, located near Texarkana, not because of the ticket, but because he wanted it at his ranch for hunting season.