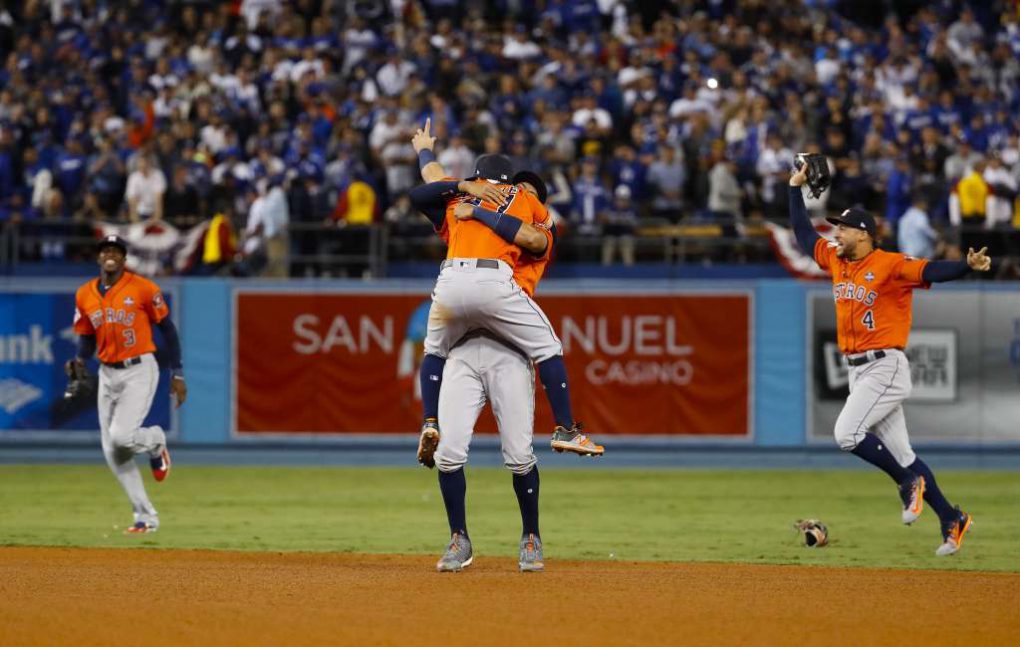 There was a runner on first, one out, and a 3-2 count. Carlos Correa stepped up to bat and smacked the ball to the fence while Jose Altuve rounded third and slid into home. The home plate umpire violently swung his arms, signaling Altuve safe as 43,116 people jumped to their feet cheering on the Astros as they secured yet another playoff victory. An exciting scene such as this seems rare in baseball, but during the 2017 playoffs, especially for the Houston Astros, this has proven to be the norm.

The Astros won the AL West division, clinching a spot in the playoffs on Sept. 17 after a dominant performance on the mound by recently acquired Astro Justin Verlander. A month later, Verlander’s dominance returned as he held the New York Yankees to one run in a complete game, 124-pitch victory in game two of the ALCS to give Houston a 2-0 lead in the series.

This low-scoring series against the Yankees followed an oppositely high-scoring series against the Boston Red Sox in the ALDS which was full of home runs and relieving pitchers. The Astros won two home games in a row with a score of 8-2, dropped one game in Boston, and ended the series by securing a victory in Boston in game four. This series also displayed MVP candidate Altuve’s hitting ability as he demonstrated his power and prowess with three home runs in front of his home crowd to spark a thus far dominant playoff run.

The ALCS series between the Astros and Yankees began in the Astros favor, as they won two games in a row behind dominant pitching performances by Keuchel and Verlander respectively. The series took a sharp turn in the Yankees’ favor, however, when games three, four, and five all fell to the Yankees in New York. The reason for these three losses for the Astros was a combination of the bats falling silent in the ever-roaring Yankee Stadium and the implosion of the Astros bullpen. The Astros batting had struggled on the road, and that was most apparent in the road stretch against the Yankees in which they combined for only 11 hits and two earned runs over three games.

Houston found themselves on the short end of a 3-2 deficit. Luckily for Houston, Verlander’s arm was ready for game six, and he delivered. He pitched for a solid seven innings, giving up only five hits and not allowing a single run. Meanwhile, the Houston bats heated back up once they returned from icy New York to put up seven then four runs in games six and seven respectively. Verlander’s second gem of the series was followed by yet another dominant Astros pitching performance by Charlie Morton and Lance McCullers.

Heading into this series, both teams exuded confidence: the Dodgers finished the regular season with the best record in baseball and completed a dominant postseason up to that point. The Astros, on the other hand, finished the regular season with the best offense in the MLB, and a late season acquisition of former MVP and Cy Young Winner Justin Verlander proved to be the team’s saving grace in more than one postseason occasion.

Behind possibly the most dominant pitching performance in World Series history from Clayton Kershaw who pitched a seven inning, 11 strikeout, three hit, and one run game. Once again, the Astros bats struggled on the road, reinforcing the postseason trend of a relatively nonexistent road offense. Despite the offensive difficulty, Keuchel put together a solid performance on the mound when he only gave up three runs, but phenomenal pitching did not mean anything when the offense failed to provide runs. The Astros left the ballpark with an 0-1 deficit and the series as the Dodgers’ confidence soared.

What followed game one was perhaps the most exciting World Series game ever which rivaled the likes of game six of the 2011 World Series between the St. Louis Cardinals, and the Texas Rangers (look it up, seriously). With the most combined home runs in a game in World Series history (eight), this extra-inning showdown featured two of the best offenses at work in the entire MLB, as well as two abysmal bullpens. The Houston bats were back from the dead, but they were only able to muster one run despite obtaining six hits.

Hopes seemed to diminish for the Astros when the Dodgers in the eighth inning placed arguably the best closer in baseball, Kenley Jansen. Despite Jansen’s status, the Astros persevered, scoring once in the eighth and once in the ninth to tie the game up just in time. An inning later in the tenth, The Astros came alive as Altuve and Correa silenced Dodger’s Stadium with back-to-back home runs off former Astro pitcher, Josh Fields, taking a two run lead. Their efforts when Houston closer, who at this point specializes in handing games to the opposing team, Ken Giles gave those two runs right back to the Dodgers with a Puig homerun and an RBI single from another former Astro, Kike Hernandez.

As the eleventh inning began, this World Series matchup  was exactly where it started as a tie ballgame, but that quickly changed when the Astros demonstrated their power with a two-run shot by Springer to put the Astros ahead 7-5. This time, however, the Astros would not give up their lead, despite giving up another home run before closing out the game and finally securing the 7-6 game two victory. As both teams traveled to Houston to begin the second leg of the series which would include games three, four, and five, both teams had to figure out their problematic bullpens.

Game three pitted two pitchers from either side both known for their curveball abilities: Lance McCullers of the Astros and Yu Darvish of the Dodgers. Until July, 2017, Darvish spent his entire major league career on the Texas Rangers, the Astros divisional rival in the AL West. Because of his time in the same division as the Astros, Darvish had faced the Astros many times in his career and vice versa. The Astros, however, clearly demonstrated that they had the edge in this matchup as they jumped on Darvish early in the game scoring four runs in the fourth inning sparked by a solo shot by Gurriel. The Dodgers attempted to crawl back into the game as they scored three runs, but the Astros eventual five runs proved unmatchable as the Astros secured their first home World Series win in franchise history.

After jumping all over the Dodger’s pitching in Game three, the Astros lineup fell victim to a dominant performance by Dodgers’ starter Alex Wood who allowed only one run on hit through 5.2 innings. Both starting starters pitched incredibly well as both teams only combined for two runs on four hits off starting pitchers. Heading into the ninth, the game was tied at one run a piece, and it looked like there was going to be another crazy, extra-inning game which have have made this World Series so unique, but in the top of the ninth, the Dodgers batters exploded at the expense of Houston relievers Giles and Musgrove. The final score was six to two as the Astros mustered one run on a Bregman home run in the bottom of the ninth, but their efforts fell short. Despite this game ending in the ninth, that crazy, extra-inning game was yet to come.

With the series all tied up at two and the final Houston game looming, a victory was imperative to keep the Astros World Series hope alive, but after Houston starter Dallas Keuchel ceded three runs to the Dodgers in the first, the Astros chances looked bleak. After two scoreless innings, the outlook worsened as the Dodgers added one run to take a four run lead, but when the Astros came up to bat in the bottom of the inning, their batters exploded and tied the game. Following the fourth, a high-scoring slugfest ensued, and by the ninth, the Astros found themselves ahead with a 12-9 lead. Despite such a cushion, Chris Devenski gave up three runs to tie the game off of a two-run home run by Puig followed up by an RBI single by Taylor. The game headed into extra innings. Through their first two batters (the seventh and eighth in the lineup), the Astros already garnered two outs. Instead of the inning closing, however, Kenley Jansen hit Brian McCann with a pitch and subsequently walked George Springer as the Astros found themselves with two runners on base. Next, Alex Bregman stepped up to the plate and smacked the first pitch to left center for a single as Derek Fisher (pinch running for McCann) raced to home plate beating the throw and winning the game.

In game six, the Astros only earned one run as Rich Hill ran through the Houston lineup giving up four hits over 4.2 innings, but managed his way out of tough situations to hold them to only one run. Then, the Dodgers’ bullpen finally demonstrated why they were so highly coveted coming into the World Series as they did not allow to Astros to score for the rest of the game. Although the Astros struck first, the Dodgers scored two runs off of Justin Verlander and another off of Joe Musgrove. Despite this relatively low Dodgers score, especially compared to the twelve runs they put up in the previous game, the Houston hitters failed to catch up as this chaotic World Series came down to a deciding game seven.

In game seven, the Astros scored two runs in the first inning and three runs in the second highlighted by a two run home run hit by Springer, making him the first player ever to hit a home run in four straight World Series games. All the Astros runs came at the hand of Dodgers’ Yu Darvish. After Dodgers manager Dave Roberts removed him from the mound, the Astros offense also left the ballpark as they did not score for the rest of the game. This proved not to be problematic, however, as Lance McCullers held the Dodgers batters to zero runs, despite hitting batters four times. Even the Astros relief effort proved competent, seemingly for the first time all series, giving up only one run for the rest of the game. Finally, with two outs in the bottom of the ninth, the Astros had a five to one lead, and the series looked over. Kyle Seager of the Dodgers stepped up to bat and fittingly hit a ground ball to the man who brought the Astros to the point who tossed to ball to Yuli Gurriel to secure the final out and win the World Series.

The Astros only made it to the World Series one other time in their franchise history when they were swept by the Chicago White Sox in 2005. Since then, the Astros only made it to the playoffs one time (2015) and even endured three 100-loss seasons in a row from 2011 to 2013. Despite the difficulties they endured, the Astros finally completed their rebuild and won the World Series. While this season and playoff run left the Astros with some questions to answer especially involving expired contracts and finding a solution for their bullpen, for now, and for the first time ever, the Houston Astros are champions. 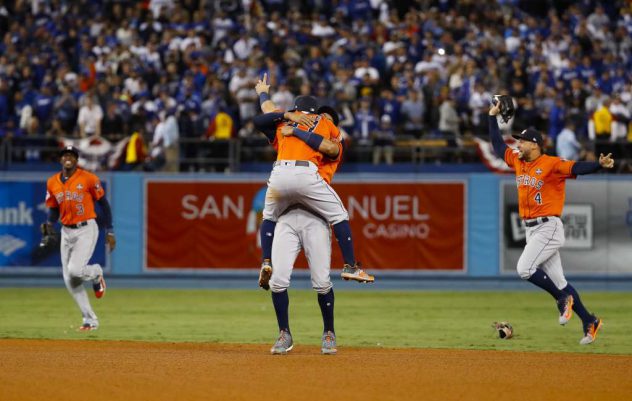