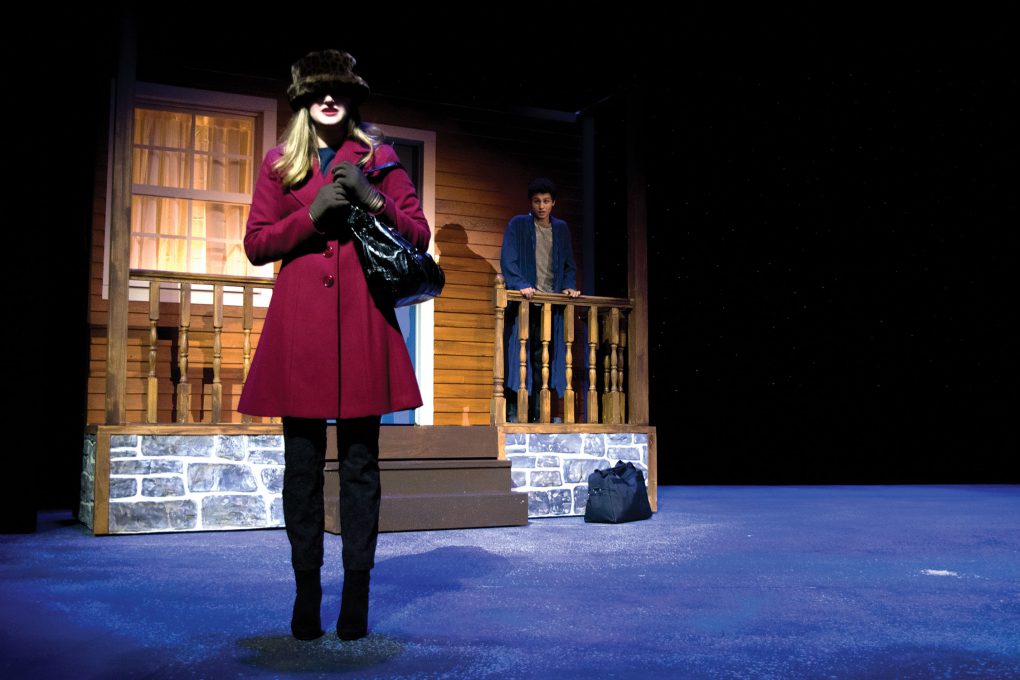 On the weekend of Oct. 21-22, temperatures in Houston barely reached 75 degrees, and the air was humid with a slight breeze. But in the Katz Auditorium, temperatures reached below freezing, and the air was filled with love and loss as audience members were transported to the mythical almost-town of Almost, Maine.

“Almost, Maine” is a romantic-comedy play written by John Cariani which premiered in 2004. It’s composed of eight short vignettes–as well as a prologue, interlogue, and epilogue–that feature nine couples exploring the meaning of falling in and out of love.

Some scenes feature sweet stories of two lovebirds meeting for the first time; some feature long-time couples realizing they’ve grown into different people. With every scene, however, each character reaches a point of resolution no matter what they’ve loved or lost, making the play both moving and optimistic for the audience.

The director of “Almost, Maine” and Upper School Drama Teacher Ms. Michelle Ludwig, proposed many plays to the Theatre Company last school year, and everyone chose this play as their favorite. Ms. Ludwig enjoys this play because it features many leading roles for the talented cast. Additionally, Ms. Ludwig said she likes to expose the actors to different genres, and it was time for the actors to try a more contemporary play.

Each scene features two different characters experiencing a unique love story. This structure allowed Ms. Ludwig and the actors to really explore the characters and their relationships with each other, but she said it can also make the play disjointed if performed poorly.

To unify the play, Ms. Ludwig emphasized the importance of bonding the entire cast to make them feel a part of the theatre family.

“One of the things I’ve tried to do in rehearsal was to schedule some times where the whole cast would be together and to develop a backstory about the life of the community, about how these people are connected and how they know each other, so that we could build a sense of community among the actors just how there’s a sense of community in ‘Almost, Maine.’… Even though we haven’t really worked together as a full cast very much, I feel there’s a really strong sense of community among the actors as a cast. They all really care about each other and support each other and have fun together,” Ms. Ludwig said.

Additionally, she worked with technical theatre teacher Mr. Mark Sell to give some unification to the sets. For example, they incorporated elements of wood in every set to allude to Maine’s well-known woods, and each transition scene featured musician Leo Kottke’s music.

“Almost, Maine” is enjoyable for the cast to perform and the audience to view because every viewer can relate to the relationship dilemmas each couple deals with, even if he or she has never experienced the situation in real life.

“Especially as an adult, I recognize some aspect of me or my relationships in all of the characters,” Ms. Ludwig said, “because I’ve had those experiences as a young person starting out a relationship, the difficult parts of being in a relationship and trying to figure out where the relationship is going, even the ending of a relationship. All of those passages are in the play in some form.”

“Almost, Maine” was the most widely performed play in high schools nationwide last year, according to Director of Visual and Performing Arts Mr. Scott Lambert. High schools embraced the comedy and the extent of its performance even outranked Shakespeare’s A Midsummer Night’s Dream. Part of its appeal may be the flexibility in casting that the play allows.  According to stageagent.com, “Almost, Maine was written with the intent to allow doubling, and can be performed by as few as 4 actors … and the play can be performed by as many as 19 actors.”

“Almost, Maine” focused on the optimism in navigating love lives. Whether a relationship began, encountered a rough point, or ended, each character ended their scene with some sort of hope for a better, happier future. This idea of optimism, infused with comedy, made “Almost, Maine” an experience that viewers will definitely–not almost–remember.