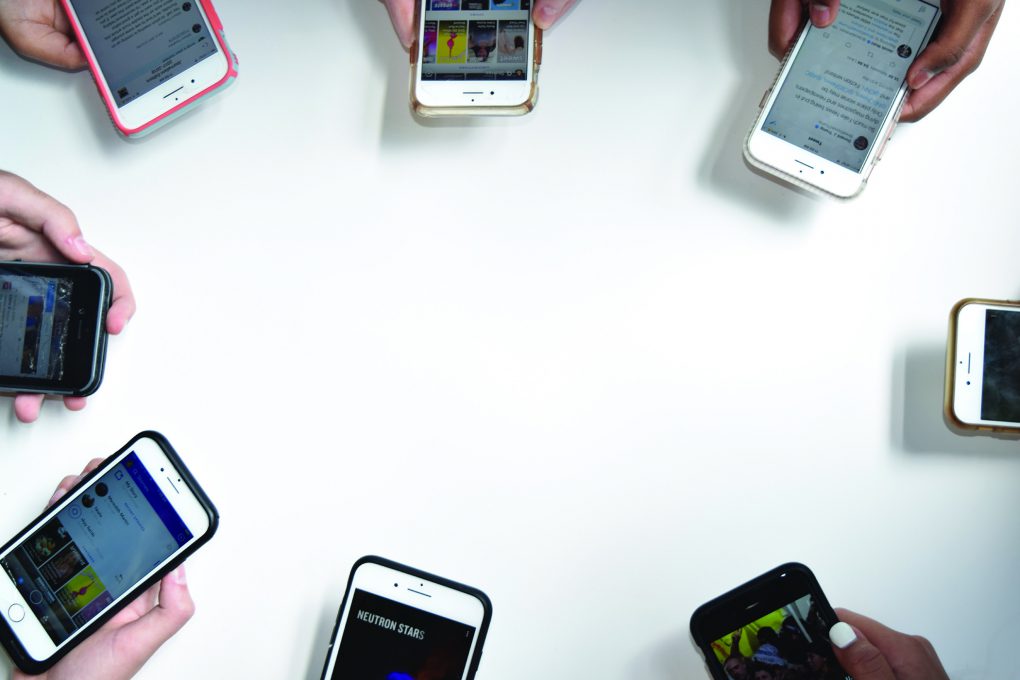 “Social media [is] an amplifier… for good or for evil,” said Mr. Vinnie Vrotny, director of technology. It is a way, as many adolescents perceive it, to connect to and socialize with others in a self-controlled environment. Why then, do some researchers believe that social media is causing people to disconnect from real relationships, and maybe even change their perception of the world around them?

“Anxiety disorders in children and adolescents, but especially in adolescents, have gone up dramatically and now reaches about 30 percent,” said Dr. Laura Lomax-Bream, the Upper School counseling psychologist. Substantial research, including a study called “Computers in Human Behavior” by Matthieu Guitton, purports that this rise in anxiety is due to an increased use of social media and the Internet.

One reason for increased anxiety in adolescents may be that when adolescents misuse or abuse social media by posting offensive comments or joking about tragic events, they are falling into a “distorted version of human interaction,” Dr. Lomax-Bream said.

This abuse of social media may be one of the reasons for increased reports of depression in adolescents. When kids use social media, they think they are being “social”; however, in reality, social media can sometimes have the opposite effect of healthy, face-to-face social interaction by decreasing adolescents’ self-confidence through their constant opportunity to compare themselves to others.

As humans have become more connected with one another, they have also entered a “loneliness epidemic,” Dr. Lomax-Bream said. While teenagers spend more time with their family than previous generations, and adolescents are physically safer than ever because of this, socializing almost solely through screens creates a false sense of connection.

“Social media feels like you have interacted with people at a certain level, but really you haven’t if you haven’t seen their faces and read their emotions and had the full message of what they intended,” Dr. Lomax-Bream said.

Adolescents make up the group with the highest rate of social media users. Adults, who did not grow up using social media, have been exposed to an increasing amount of news incrementally. Teenagers, however, have lived with the constant flow of news on social media.

“[Teenagers] never had a flow of information that [would allow] a chance to move from a walk to a jog to a run to a sprint. It’s just been sprint right from the start,” Dr. Lomax-Bream said.

Users on social media say anything they want to say, often anonymously.  When people are able to say what they want without repercussions, skewed representations of current events can appear.

One common example of this is the use of callous humor, such as memes, produced as a response to current events. Although “humor is a high-level defense mechanism,” Dr. Lomax-Bream said that teenagers will often create crude jokes about current events as a means of coping.

Those who are unaware of the direness of these events will receive humorous interpretations from social media, of what in reality are tragic, significant disasters. Although these coping mechanisms may seem like valid, causal defenses at the time, people may start to believe what is drilled into their heads over and over again – such as inappropriate humor or offensive remarks – through social media, even if these are false representations of reality.

Not only can social media belittle important issues through humor, but it also can tailor the information a user receives to match their own opinion. When a user views, likes, or comments on an article that is especially emotionally charged, many applications, such as Facebook, will record the response and find other articles that match this view. This “perpetuates this escalating feeling around what gets your attention and what you respond to, so then [apps] just keep giving you more and more of that,” said Dr. Lomax-Bream.

Jiya Ghei (12), president of the Young-Liberals Club, said that she believes social media “provided an accurate description of the worst” in the aftermath of Hurricane Harvey. Although the media succeeded in illuminating the worst of the storm, Ghei said, “they probably could have been more focused on relief efforts.” Rather than displaying all aspects of the traumatic event, the media focused on the most emotional components to attract viewers.

Additionally, “social media is comprised of people who have their own agendas,” said Ghei. No one media source will be able to accurately relay information to viewers because news can always be interpreted differently.

This doesn’t necessarily mean people should stop using social media altogether. There are ways that it can be used to support communities during politically or socially tense times.

Apps like Facebook, in particular, have shown to be helpful during the recent natural disasters in which users were able update their family and friends. During Hurricane Harvey, many Houstonians used the “check-in” feature to notify followers of their safety. In addition, hashtags on all platforms may be used to increase awareness and build a support system: a few common examples including #BlackLivesMatter, #PrayforParis, #LoveWins, and #PrayforVegas.