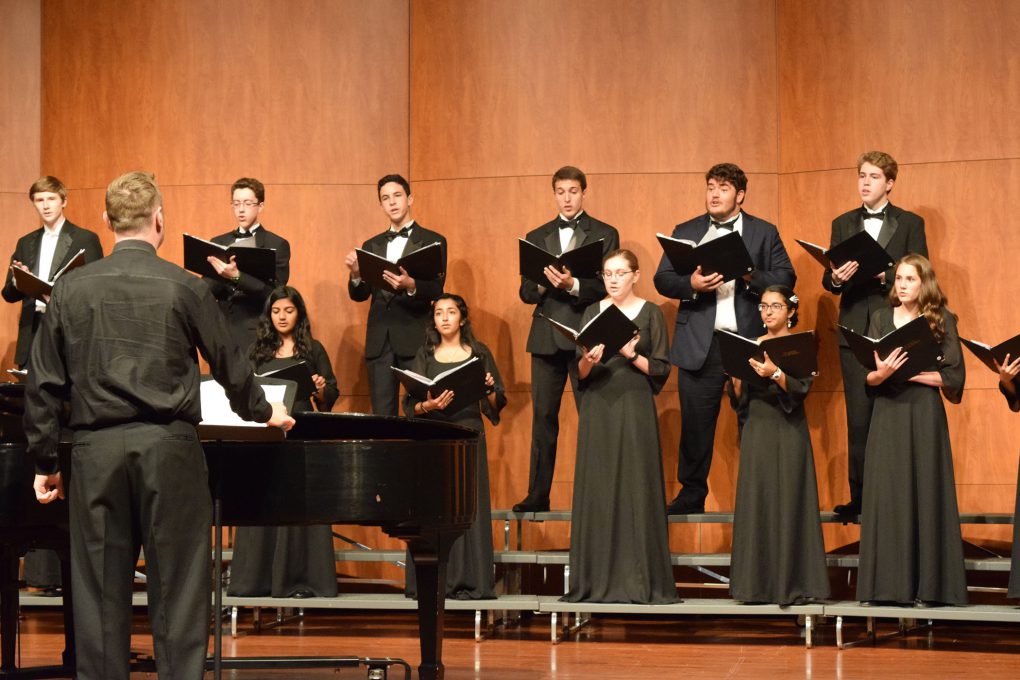 Saturday Oct. 14 eerie tones filled the Recital Hall as the lights shone on the choir. The Hauntcert featured songs the Encore and Concert Choir had worked on since the beginning of the school year.

This year they combined their two performances. In past years the choir, that works in a class of singers of all levels focuses on learning vocal techniques, has performed separately from Encore, Kinkaid’s auditioned ensemble that works on a more challenging repertoire.

The concert usually has a general theme; last year it was patriotic. However, because the performance was so close to Halloween this year, Upper School Choir director Mr. Chip Colvin, decided that this spooky fall holiday would be their focus. They performed Halloween songs with spooky tones, which commonly use minor keys,in anticipation for the upcoming holiday.

Mr. Colvin thought the spooky theme was exciting, and that excitement carried over into his students attitudes towards the show.

“Right before the concert started, all of the choir kids were hanging out in the room and they were having fun. They were singing, dancing, and generally being joyous. Other than just loving to see my students have a good time, this told me that they felt really confident that they were about to give an excellent and well-prepared performance,” Mr. Colvin said.

The Choir and Encore performed a pair of songs with lyrics by Edgar Allan Poe – “Evening Star” and “The Lake” – which fit well with the Halloween theme because of Poe’s characteristically dark writing.

Spencer Hickman (11), who has been a member of Choir and Encore since freshman year, said,”‘In The Sorcerer’s Hall’ was a fun song, because it has a ton of recognizable themes in it, and it got me so hyped for Halloween every time I sang it.”

In the middle of their performance, seniors Ashton Lambert, William Miner, and Jervon Monroe burst into the recital hall dressed in Harry Potter robes and armed with wands in a moment of surprise. They chased each other around the room shouting spells, while Encore sang “Double Trouble” from Harry Potter and the Prisoner of Azkaban. This moment was a much needed comical addition to the somewhat dark show.

“I enjoyed [‘The Lake’] most because most the song is slightly dissonant, and the articulation is a little jarring, but there’s one part in the middle with these beautiful open harmonies. The contrast between the sections is probably what I like the most about it,” said Annaliese Fowler (11), Encore Vice President and leader of the alto section.

“I think the audience really enjoyed the wizard duel, and it was really hard not to laugh,” Fowler said.

Mr. Colvin asked the choir for their help to chose a song to go along with the theme, and they decided on “Pure Imagination” a nostalgic song often remembered from the movie Willy Wonka & the Chocolate Factory. Spencer Hickman (11) began the song with a short solo before joining the Choir to finish.

“Singing the solo was special for me because the one year anniversary of Gene Wilder’s death was very recent, and I think he really made an impact in everyone’s lives,” Hickman said.

Although it was their most challenging piece, the Choir’s performance was impressive.  The piece had challenging text in Latin and complex rhythms, but once they mastered the song, “it was satisfying to sing and conduct,” Colvin said.

“One of my favorite parts of the show is when Grace Muir (10) belts in ‘O Vos Omnes.’ Her voice is incredible,” Hickman said.

Even though they missed rehearsal time due to Hurricane Harvey, they managed to pull off an exciting fall show, giving them extra time to prepare for their Margaret Kinkaid concert on Dec. 3 and their concert at the River Oaks Shopping Center on Dec. 9.