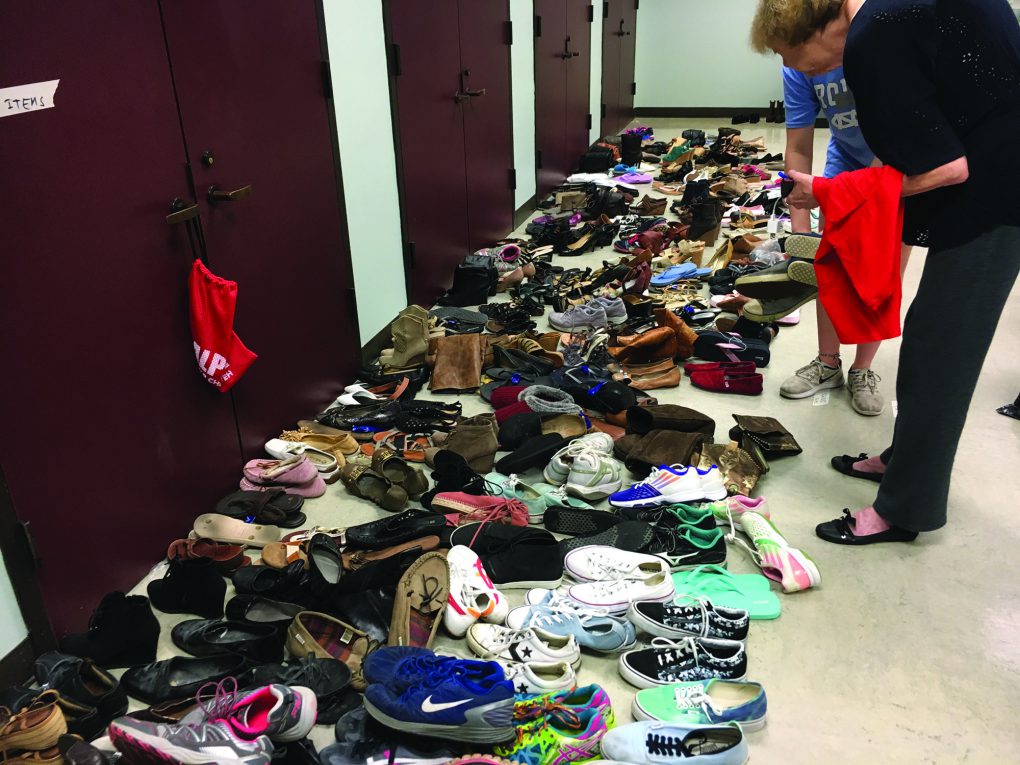 Government, businesses, and just ordinary people have raised hundreds of millions of dollars and volunteered countless hours. Here at Kinkaid, parents, faculty and staff have coordinated efforts to help after Harvey.

“Literally as soon as it happened—we were taking inventory of families that were effected—we were getting so many calls about ‘how can we help?’” said Advancement Communications and Marketing Manager Ms. Georgia Piazza, who has been organizing and mobilizing staff, faculty, and families to help members of the Kinkaid community.

For every family hit, a volunteer has been assigned to ensure that their needs are met; these point-persons comprise the One Kinkaid Assist Teams, or OKATs. “We’ve been working with them all seven days a week, morning, noon, and night,” Ms. Piazza said.

Furthermore, the Kinkaid Proud Fund has raised $220,000 to help affected staff and faculty.

Many projects were conducted directly after the storm. An online submission process to volunteer was conducted on Aug. 31: there were over 500 online submissions. “We finally just had to turn it off,” Ms. Piazza said, half-laughing.

On the weekend of Sept. 2 and 3, about 100 people participated in the supplies drive, donating cleaning supplies and toiletries. The items were sorted into “cleaning kits” and taken to effected homes which volunteers  cleaned. “There was a lot of concern, how everyone was doing,” Ms. Piazza said, describing the scene at the drive. “We were still hearing about families that had flooded. There were lots of tears. People feeling sad for their friends that have lost everything. But then there was also happiness; people who felt so grateful for what the school is doing.”

Now that many people are getting back to normal routines, big projects are being conducted mostly on weekends. On Sept. 9 and 10, about 50 volunteers cleaned up seven homes. However, smaller ventures have been successful as well. On Sept. 11, a group of parents made 24 casseroles for those who needed help with meals.

Other operations include finding families places to live, putting together a list of car dealerships, and coordinating furniture donations. Future plans include providing vendor lists, helping families move, and continuing to check in with effected people. Relief efforts at Kinkaid will be continuing for a while. “Probably for six months,” Ms. Piazza said. “Maybe more. It just totally depends on each family—it’s a case-by-case basis.”

The student Community Service Council is also very interested in the Harvey recovery process. Since many places are only taking volunteers that are 18 and older, the student body will most likely be helping with the rebuilding process that will take place after the clean up a few months from now, Ms. Branaman said.

In the meantime, however, students can volunteer on their own time. Daniel King (11) volunteered at the George R. Brown Convention Center, admitting people into the shelter.

“It wasn’t always the easiest thing to do,” he said. “Part of the application process is asking people what happened to them; it’s not just ‘what was your address’ and ‘what is your name.’ It’s more than that. You have to hear the stories of those people who were not fortunate during the storm.”

Not only did King personally help, but he also gave others a chance to help as well. Sitting in a cubicle, King responded to emails to the Red Cross from people who wanted to volunteer.

“It was kind of stressful to see a new email appear every minute—keeping up with those was not easy, and we didn’t get to all of them,” King said. “But it was nice to see how many people wanted to devote their time to volunteering and helping those who had been devastated by the storm. There’s no doubt in my mind that a number of those volunteers had been affected themselves, but they were still eager to help.”

In the months to come, he hopes to volunteer more.

“It’s important to go out and help your community whenever you can, especially during times of a disaster. Everybody should—when they get the chance—go out and help somebody else.”