Backyard construction resumes: Harvey affects use of Backyard for athletics and classes 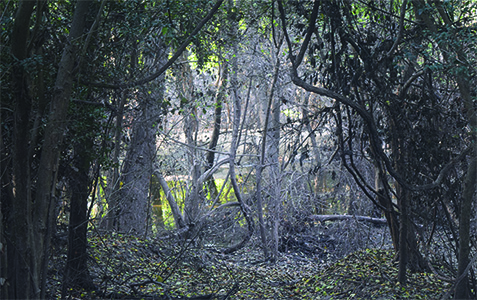 After nearly six months of construction in the Backyard, Hurricane Harvey has affected the area, leading to possible delays for future use.

Last year, the cross country girls’ and boys’ teams used the 3.9 acre Backyard as a “comprehensive training facility, with workouts ranging from anything to easy runs and cooldowns to repeat miles and hard days,” said Mr. Ryan Gillentine, head coach of the boy’s cross country team.

This year, however, the 1000-meter loop in the backyard has been closed because of the construction of the tennis and baseball facilities.

Mrs. Kate Lambert, assistant coach of the girls’ cross country team, said that the Backyard was great for preparing for SPC because the large trees shade runners from the heat.

“Because the sun is beating down on us during August and September, the shade would help us on interval workouts,” said Mrs. Lambert. However, construction in the Backyard has commenced and will not stop until at least February.

Harvey struck Kinkaid facilities hard because the Buffalo Bayou ran right behind the school and spilled into the backyard.

Many teachers have said that the bayou rose so high that the running trails are basically gone.

It will take a while for the Backyard to recover, but the new construction project looks to combat floods like Harvey through the building of a detention pond, which is essentially a recessed area specifically installed to mitigate flooding.

According to Mr. Gillentine, “When it comes to an event like Harvey, all bets are off, as this was a 0.1 percent flood, and most people can’t design for that.”

Other parties use the Backyard as well, including many upperclassmen who took honors biology and recall taking first graders to the Backyard to help teach them biology lessons such as the parts of a flower.

Ms. Honig is in charge of booking teachers who use the Backyard and says that science classes use the backyard as a practical review for tests because many don’t have any other access to that kind of environment and situation. AP environmental science uses the Backyard to monitor populations and for invasive species studies, according to Ms. Honig.

The Kinkaid website describes the purpose of the Backyard in similar terms: “It has been designated and dedicated by The Kinkaid School as a nature study area, effectively making it an outdoor classroom in which natural systems are preserved and used as an educational resource.”

Ms. Honig is hopeful that the Backyard will be able to recover and return to its previous state. When asked about how long it will take for the backyard to recover, Ms. Honig said, “Probably not actually very long because the backyard vegetation and animals are actually adapted to regular flooding. It is a riparian hardwood forest with plants like sycamore, and trees like that are used to being inundated for long periods of time.”

The running trail that leads further into the backyard is going to take longer to recover, since the small silt from the bayou has made the trail rather mucky and therefore unusable to the cross country teams for now.