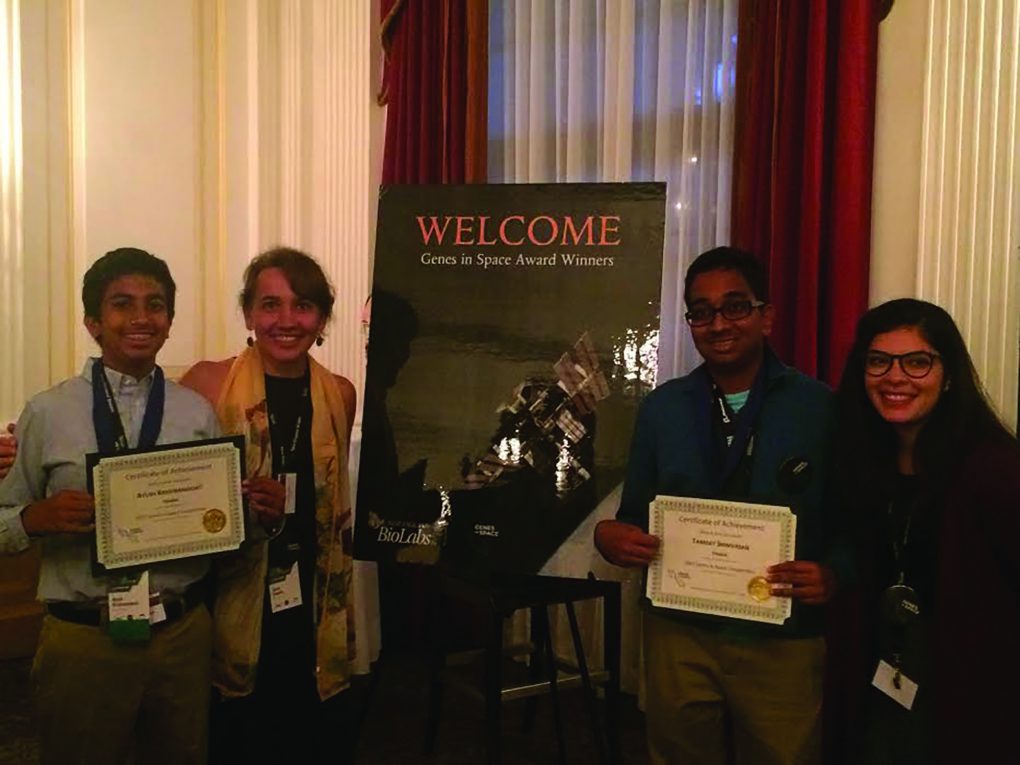 While many of us may think of summer as a break, a number of Kinkaid students used the summer to accomplish great things. This past summer two pairs of Kinkaid students, Ayush Krishnamoorti and Tanmay Srinivasan (10) as well as Dz and Socs Zavitsanos (12), achieved recognition at national competitions.

Krishnamoorti and Srinivasan participated in the International Space Station’s Genes in Space competition, and the duo finished as one of five finalist teams. They attended the 2017 ISS Research and Development Conference in Washington, D.C., where they worked with scientists from Harvard and MIT and presented their project to a committee made up of scientists and teachers.

Head of the Science Department Dr. Sonia Clayton said, “There is a tool called a miniPCR machine, and the challenge was based on using this machine aboard the space station to answer a real life question. Our Kinkaid team did such a great job of putting together a strong proposal on hypoxia and working with a graduate student from Harvard.” MiniPCR stands for miniature polymerase chain reaction and is a machine that duplicates specific pieces of DNA.

Krishnamoorti and Srinivasan’s project aimed to figure out the cause behind hypoxia in space and whether or not “altered adenosine signaling pathway” is the cause for astronauts’ lower oxygen levels in space.

“Me and Ayush worked on our project for about three months,” Srinivasan said. “The competition’s most fun part was meeting many new people and being able to present in front of esteemed scientists.”

Over the summer, twins Dz and Socs Zavitsanos (12) attended the San Antonio Film Festival where their film Two of Five Million about Syrian refugees in Greece was screened.

Their film was shown in front of an audience made up of festival goers, and the brothers say it was met with applause. It was also accepted to 13 other film festivals where it will be shown. although Dz and Socs won’t be able to attend all of them.

Two of Five Million tells the story of two Syrian men living in a refugee camp in Filippiada, Greece. The brothers visited the camp in summer 2016 while on a family trip to Greece.

According to Dz, one of the best parts of the festival was the feeling of having a film addressing such an important topic.

“It was really cool to be able to share this story with everyone there,” Zavitsanos said. “We tried to not make it too political and just show the refugees’ story to get the viewer connected to it.”