Thirty-Seven Kinkaid students tell the story of their 596 peers 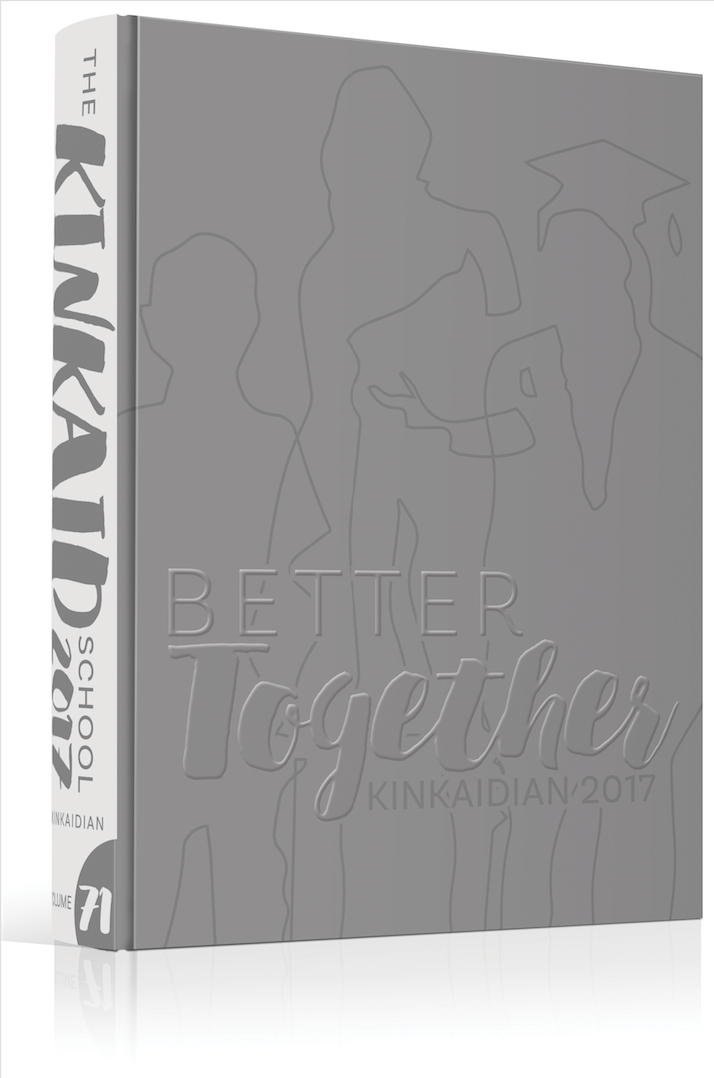 [dropcap]T[/dropcap]he 2017 Kinkaidian yearbook will be distributed to the Upper School after the Honor Day assembly on May 16. Traditionally given out at the individual grades’ End of the Year (EOY) party on the last day of final exams, this year the event has been moved up and will take place in the Dining & Learning Center.

“Year after year, we were left with boxes of leftover books from students who either forgot to pick it up or were still taking a final when the EOY took part,” said Charlie Marix (12), one of the four Editors-in-Chief this year. “Everyone wanted to leave after their last final, no one stayed to look at the book.”

The other senior Editors-in-Chief, Mary Helen Burt, Marie Parra, and Rebecca Noel, agreed that the process was not the best.

“When extended time students finally got out of the exams, everyone else would be gone,” Burt said.

Assistant Editor Anna Reckling (11) recalled seeing a yearbook left outside in the rain. “It was really sad to see how after all of our hard work, it would just be abandoned on a wet bench,” Reckling said.

Work on the yearbook begins before school has even started—in fact, a lot of the planning takes place at the end of the previous year. The yearbook staff spends the majority of the year ironing out even the most miniscule details. Each spread will go through six or seven drafts, just to insure that every page is unique and has a certain “wow” factor. Because the book is so thick, their deadlines are spread throughout the year. Students commit extra hours before and after class to review pages in the days leading up to a deadline day, where they’ll turn in anything from 160-260 pages.

The theme this year is “Better Together.” Choosing the theme ideally takes place before the school year even starts, but this fall they found themselves rethinking the themes they had initially chosen.

“We came up with a shortlist of themes that were thrown out during applications, but we didn’t like them. So we just called a big editors meeting with Ms. Yim a week before school,” Burt said. “We told everyone literally just yell out anything. Any ideas.”

Every page of the yearbook is tied to the theme. Reflecting back on the process, Marix said, “I feel like we really changed it up this year. We tried to reimagine [The Kinkaidian] and take what worked from last year and expand on it. We really worked hard to try to carry out a theme throughout this year because last year, it wasn’t as evident throughout the book what our theme was, so we tried harder with this one.”

Although some students regard The Kinkaidian as just a heavy book that contains a bunch of pictures and captions, it serves a much greater purpose: It’s a memory bank, a history book, and even a reference book. The first look at a yearbook frequently symbolizes the end of another school year and the start of another summer, but its real meaning becomes clear when it is opened years later and the memories come back to life.

The yearbook possess images and captures the moment of all events and peers who made ones high school experience distinctive. It encapsulates memories and people that evolve into sometimes unrecognizable faces. It freezes time and holds memories that would only be remembered if the yearbook was opened. The yearbook is an irreplaceable way of capturing high school recollections.

When looking at the book, Burt reminds students to “take the time to look through all the pages because this year we strived to do different modules throughout, which is like little sections where you include information that hasn’t been included in the past. If you really take the time to look through each spread, you’ll see some funny and entertaining things on there.”