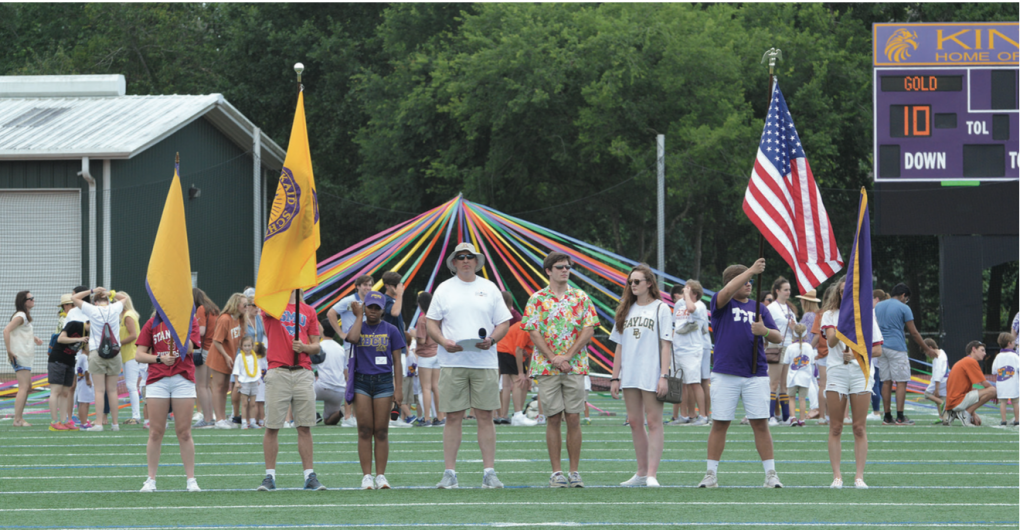 [dropcap]O[/dropcap]n Thursday, April 20, the Gold Team won the 92nd Field Day, continuing their two win streak. Gold snagged the win with the seniors pulling through in the tug-of-war. Although the win was sweet, the real highlight of the day was Stephen Wrabel, (Class of ‘07), who surprised the Upper School with a private concert and Q&A session.

To begin the morning, the advanced film class previewed films set to show in their spring film festival. The Upper School attentively watched juniors Dz and Socs Zavitzanos’ documentary on Syrian refugees called “Two of Five Million.” While this film brought silence to the Brown Auditorium, Nolan Watt’s (12) film, “A Cut Above”, filled the room with laughter as Ben Padon (12) and Mia Munn (11) both plotted to kill their dates.

When the films were finished, Katherine Berman and Mrs. Angela Wainright took the stage singing “Ice Ice Baby” to start off teacher/student karaoke. While Jake Hammer and Ms. Krista Forster’s rendition of “Take on Me” wowed the crowd, TX and Dr. Ed Harris won the crowd’s vote for best pair with their version of “Crazy Train.”

The couples took the stage next with Caroline Totz and Nick Límon from the sophomore class, Aerin Kalmans and Myles Chandler from the junior class, Elizabeth Mitchell and Pierce Johnson from the senior class, and Dr. and Mrs. Anderson from the faculty. Seniors Mitchell and Johnson beat the other couples with only one wrong answer.

While the rest of the freshmen sat up on the balcony, Mary Katherine Rice, Katie Taylor, CC Jeffers, and Derin Baysal faced off in a pie eating contest, stuffing their faces until it looked like they were going to be sick; Taylor came out on top and earned the pleasure of pushing  Lahourcade’s face into a bowl of yogurt. Despite the punishment, Lahourcade appreciated the flavor: “Mmm, it’s blueberry,” Lahourcade noted.

The students then took a short break in the quad for snacks, waiting eagerly to see who would win the dodgeball tournament. In the final, Catch My Balls, a team of junior boys, and the coaches faced off in the finals. Although Coach Larry Wilkins was considered the MVP, his team lost to Catch My Balls in the finals leaving the junior boys with the win.

This year Kinkaid began a new Field Day tradition with the senior boys ping pong tournament. Although the first match to 21 ran long, the emcees quickly modified the game length to 11 points. Benji Rae and Saef Iftikhar faced off in the final with Iftikhar stealing the win from Rae on his birthday.

Seniors Rob Lahourcade (guitar), Austin Karkowski (piano and vocals), Will McLeroy (guitar), Sellars Thomas (bass), and Saef Iftihkar (drums) then performed for the Upper School. The band jammed out as students and teachers sang along to classic songs like “Paint it Black” and “How Far is Heaven.”

When the band finished performing, Karkowski pretended to continue on his own. Stephen Wrabel, Kinkaid alum and popular music artist, then surprised the crowd, ready to perform one of his latest hits, “11 Blocks”. Wrabel also shared a song from his upcoming EP, “We Could Be Beautiful.”

After performing, Wrabel sat down with Karkowski to talk about his journey to success, inspiration behind his songs, and providing funny comments along the way. He talked about his “meandering path in life,” his first songs and creations, including the theme song for the Guy Fieri game show “Minute to Win It,” and more.

Wrabel also answered students questions ranging from how he grew in high school, where he you got his shirt, and what his advice to songwriters is. Although these were exacting for him and may have required a brief pause or comment to stall and think, he answered each question with tact: He joked about his his vintage Tommy Hilfiger shirt that he bought on Etsy and advised aspiring songwriters to try hard not to think of what people. His explanation of growth in high school turned into advice for everyone encouraging them to find one thing that makes them feel comfortable and follow that through life.

After a lunch of burgers, hot dogs, pizza, and more, students regrouped with their advisories before heading over to the Lower School where they met their buddies.

After making the long march to the field, the Purple and Gold teams resumed the annual rivalry and looked to prove their respective teams’ worth on the field. Dr. Martire made some opening remarks, Upper School students took part in the Pledge and National Anthem, and then, the games begun.

With the field events over and Gold securing the win in the final event, everyone made their way to the Harrison House Green where they bought food and sweets, experienced fun rides, and wrote as many raffle tickets as they could before their hands started hurting. All in all, an enjoyable Field Day.