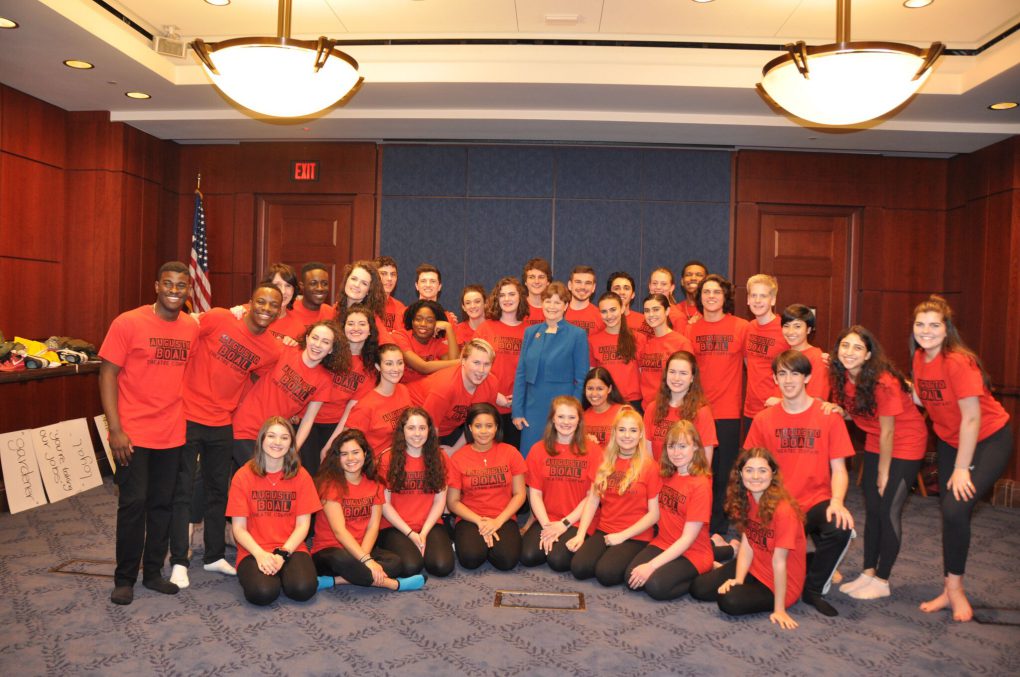 Looser helped start a conversation for change on March 28 when she co-directed and performed with the Augusto Boal Theatre Company an image theater piece depicting racism and police brutality in front of a group of Congressmen and women in the United States Capitol.

Last summer, Looser attended the Carnegie Mellon Pre-College Drama Program. Through this program, she became involved with the Boal Theatre Company, which specializes in “image theater,” a kind of art form created by Brazilian theatre director, writer, and politician Augusto Boal in the 1960s as a form of theatrical protest. The Boal Theatre Company continues his work, allowing performers to use the theater to liberate themselves and promote change.

“Image theater pieces are sort of like skits, but they use words or stories with more imagery, music, dance, and gestures,” Looser describes.

Looser’s director of the Boal Theatre Company, Jill Wadsworth, instructed the students to pick a topic they were passionate about. After her recent experience with the 2016 Upper School musical, “Hairspray,” Looser immediately knew she wanted to do a piece on racism. She had starred as Tracy Turnblad, an overweight high schooler who wants to integrate the Corny Collins Show despite opposition in a segregated 1960s Baltimore.

“‘Hairspray’ opened my eyes to what a pressing issue racism is,” Looser says. “It touched me because not only did I meet new people with different experiences, but I also learned about the experiences of people I go to school with, who I had never taken the time to ask about.”

Looser decided she could not tackle a piece on racism alone and do it justice because she had never experienced any of the prejudices blacks face. Wadsworth suggested that Looser combine creative forces with Murphy Quake, a 17-year-old African American student from Philadelphia, who wanted to do a piece on police brutality.

Looser says, “Murph was the coolest guy ever; he’s one of my best friends now. Getting to know Murphy was my favorite part of the experience—he has so many different experiences than me, his story and background are so different than mine because of where he’s from, where he lives, his race, and his culture.”

“136+”, the title of Looser and Quake’s piece, references the number of African-Americans killed due to police brutality in the first seven months of 2016. The first half of “136+,” mainly directed by Looser, depicts racism beginning with slavery to the present day. Quake’s half focused on the horrors of police brutality and the people killed because of it.

The piece begins with Quake delivering a powerful acapella song about the horrors of slavery in the South. Other performers emerge and cluster in groups, eventually forming a jeering ring around a black girl, before two white men rush up and yell, “Welcome to the Auction.” It’s jarring and unsettling to watch the performers shout racial epithets at the girl. Another powerful segment is when the performers, marching like soldiers, chant “Rock, Paper, Scissors, Shoot” and pretend to shoot the girl. As the scene crescendos, it becomes a reflection of the “Black Lives Matter” and “All Lives Matter” dialogue.

New Hampshire Senator Jeanne Shaheen saw Looser and Quake’s piece after attending her granddaughter’s dance performance in a different section of the Boal Program during Parent’s Weekend. After watching the performance, Shaheen talked to Wadsworth about how she enjoyed their image and would love to have them perform in front of Congress. Looser and Quake had their doubts: Organizing 40 students from all over the country and one from Mexico to perform together would be no easy feat.

In October, however, Looser and Quake received an email from Wadsworth explaining that it may be possible for the image to go before Congress. The moving parts came together when the group arrived at the Capitol Building on March 28. After going through a large amount of security, they walked around the building, went underground to the United States Capitol subway system, and even saw Arizona Senator John McCain. Their tour ended at a room where Shaheen invited other senators and people who worked in her office to view the performance, the first of its kind to ever be performed for the US Congress.

Looser wished that more people with different views had been able to see the image but agrees with Shaheen’s message to the students after their performance. Shaheen told the Boal performers that although it may seem like a small impact now, their performance has opened the door to other theater groups being able to come in and spread their message with Congress and to have Boal’s work transferred to the United States and make an impact on this country.

“Art isn’t meant to smack you in the face with a message that you should or shouldn’t think of the world; I think it should create conservation,” Looser said. “I hope that our image left people reviewing how they see the world and people different from them…I hope it spurred conversation and thought and opened people’s minds to looking at a situation that seems black and white or two-dimensional in a different way.”