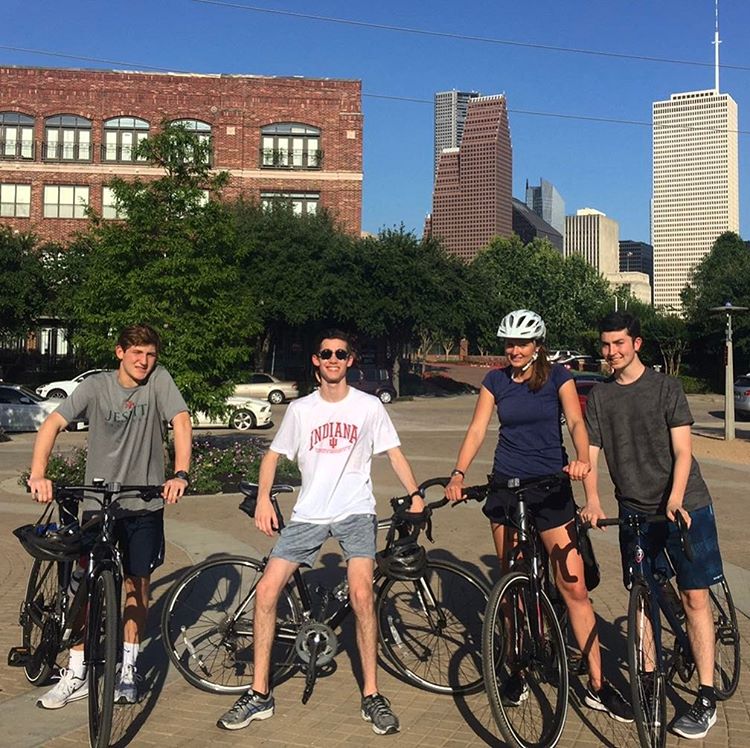 [dropcap]I[/dropcap]magine taking a trip to Florida with your family. Now imagine instead of flying there, your mom suggests that she would rather bike the 500 miles. This may sound crazy and almost impossible, but this summer five Kinkaid students will be biking this same distance through the beautiful countryside in Spain. Seniors Tommy Ereli, Sophia Solé, Noah Pintar, Ben Padon, and Maggie Wallis will be biking the Camino de Santiago (also known as the Way of St. James), an ancient pilgrim route stretching across Europe, ending at the tomb of St. James. They will begin their journey in Pamplona and finish in Santiago de Compostela. They will be accompanied by three other friends, Shaw Butler, a senior at Strake Jesuit, Normand Bremner, a senior at St. Thomas, and a friend of Solé’s from Connecticut.

The idea struck when Sophia and Tommy were in Señor Longoria’s Honors Spanish class during freshman year. They read an article about the Camino and were instantly hooked.

“A lot of people do Europe trips in the summer and I thought as a graduation thing I would do this instead,” said Solé. She originally wanted to walk it, but upon realizing it would take around three months, decided biking it would be a better idea.

“I got really into biking this year after we decided to do this,” Solé said.

Training for the Camino has been intense and required weekly group rides and individual preparation. Solé has been using her stationary Peloton bike at home for rides in the morning. Solé said that it’s similar to “Soul Cycle, but at your house.”

So far, the farthest the group has biked is 35-40 miles in one day. They usually bike from Memorial Park to Buffalo Bayou Park downtown. They have also driven to Chapel Hill, TX, an hour away, to bike there for a day.

“It was hot and we were all sweating and complaining, but we know it will all be worth it when we have reached the cathedral in Spain,” said Padon about the grueling training sessions.  The group will need to be able to bike around forty miles a day, depending on their location.

Ereli and Pintar will be joining the group after seven days in León. Solé, Padon, and Wallis will fly into Barcelona and spend three days sightseeing before commencing their trip.

Each individual in the group has a different job assignment. The group has made a meticulously organized spreadsheet of information like packing necessities and job assignments. For example, Padon is in charge of first aid in case there is a medical emergency on the trail; Wallis will make sure everything is documented by GoPro so the group can make a video later and speakers for music that will bring spirit and excitement to the group; Solé is in charge of knowing the history of each place the group stops and knowing which hostels they will sleep in.

“I have never stayed in hostels before, so I am kind of worried, but they are really cheap and it’s in the spirit of the Camino not to plan it out,” Solé said. The hostels will contain large rooms with many pilgrims sleeping in each room.

The group will carry their clothes and supplies in backpacks with additional storage in small packs attached to their bikes. They aren’t allowed to bring much because their backpacks can’t weigh them down as they bike.

“[The Camino] is pretty safe, for the most part; you just bike along where most people would walk,” Solé explained. The path will wind through towns and countryside and will be both established road and gravel paths. They are also going during a less popular time of year, so the roads will be less crowded.

While the trail isn’t very dangerous, there are a few potential pitfalls. The bikes must be kept in good shape to avoid any of them breaking down.

“I’m worried I’m going to get a flat tire,” Solé said. Normand Bremner is in charge of potential bike breakdowns. His assigned job is to know how to fix the bikes if something happens.

The trip will last around three weeks. Solé said, “I am excited. It’s a bucket list thing I have wanted to do for a while. I’m excited to do Europe by myself and practice my Spanish and I’m really excited about the food.”