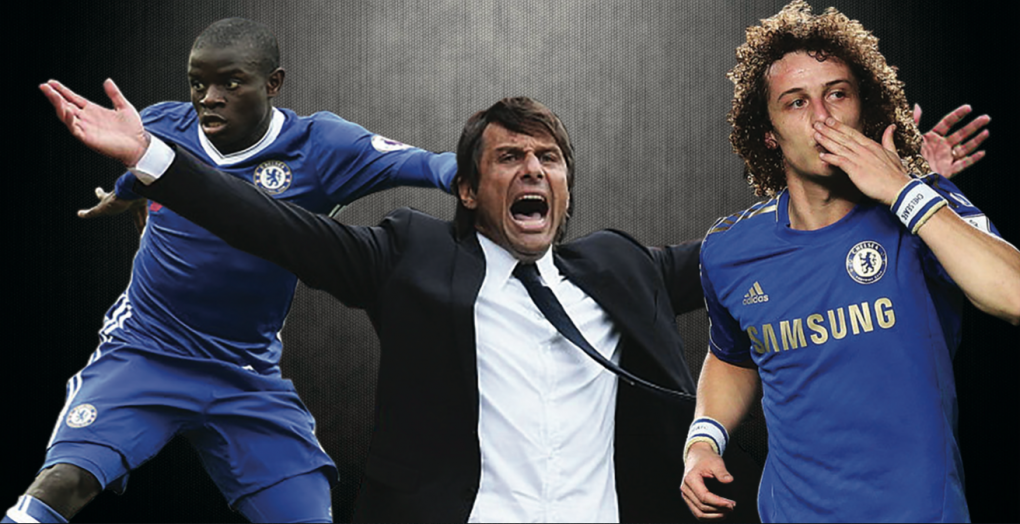 [dropcap]T[/dropcap]hey’re back. Exactly a year ago, Chelsea were fighting to stay in the top half of the league. Today, they will have (most likely) won their second English Premier League title in three years. The Blues can to seal the deal with a victory against West Brom after second-placed Tottenham’s 1-0 loss to West Ham last Saturday.

The revival of Chelsea is in no small part due to the tactical genius of Italian manager Antonio Conte. Conte, who was hired last April, reenergized a lackluster Chelsea squad by bringing in N’Golo Kanté, Marcos Alonso, and David Luiz. While many people were skeptical of the huge price tags for the latter two (a combined 53 million Euros), both have excelled in Conte’s system.

After back to back losses last fall against Liverpool and Arsenal, Conte tinkered with the squad and began playing a 3-4-3 that he perfected while managing Juventus in Italy. Following the change, the Blues ripped off 13 straight victories and have not looked back.

Kanté, who made the switch from last season’s champions Leicester City, has been doing the work of three men at the heart of the Chelsea team. The defensive midfielder is the clear favorite for PFA Player of the Year. Diego Costa has impressed as a well-behaved pit bull pressing oppositions’ back lines, David Luiz is no longer a meme, Pedro has been playing like it’s 2013–in short, everything has been clicking for Conte and Co. and they have undoubtedly been the best team in England.

Second-placed Tottenham however, will be sorely disappointed with their performance in the second half of the season. The electric trio of Harry Kane, Dele Alli, and Heung-Min Son gave the North London side hope for their first title since 1961, but they fell just short. However, supporters will be ecstatic with the club’s promising future and recent dominance over rivals Arsenal. Kane currently sits second in goals scored this season (21) trailing only Everton’s Romelu Lukaku (24).

For Lukaku and Everton, this season has been one of ups and downs. While their seventh place finish and European football next season is a promising start for new manager Ronald Koeman, there are many questions that must be answered this summer for the Liverpool based club. If they can hold onto star players Ross Barkley and Lukaku, look for Everton to challenge the top tier of clubs next season.

While the season winds to a close, the race to finish in the top four is just heating up. While Liverpool and Manchester City currently hold the last two places, Manchester United and Arsenal still have a sliver of hope. If either Man City or Liverpool, there is room for Arsenal to claim fourth place despite a very disappointing season for Arsène Wenger and the gunners.

At the other end of the table, Sunderland and Middlesbrough will be dropping down to the second-tier Championship League while Hull City, Swansea City, and Crystal Palace are battling to stay out of the final relegation position. Newcastle United and Brighton & Hove Albion will be rejoining the Premier League next season.

All in all, it has been a crazy season filled with exciting finishes, physical battles, and emotional performances that cannot be found anywhere else in the world.