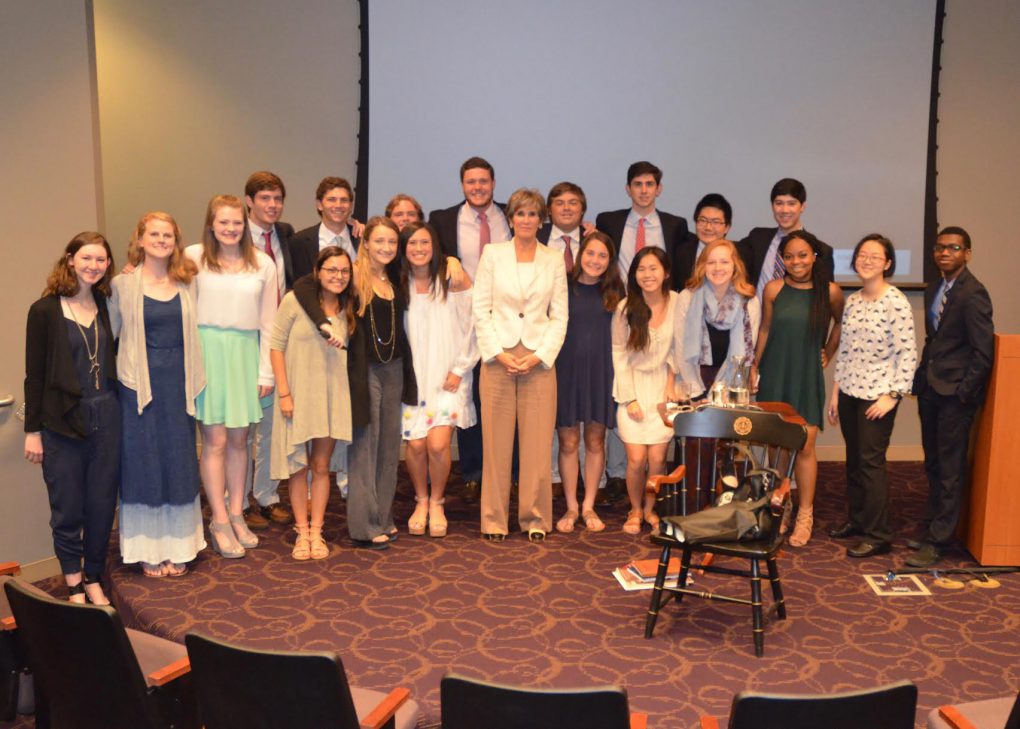 [dropcap]O[/dropcap]n Monday, April 3, one of the most prominent and well-known conservative voices in America spent a day at Kinkaid as a part of the 2017 Wells Fellow series. Mary Matalin, a political consultant and pundit known for serving under President Ronald Reagan, running the 1992 campaign for George H.W. Bush, working as an assistant to President George W. Bush, and serving as counselor to Vice President Dick Cheney until 2003, was at Kinkaid from 8 a.m. to 4 p.m. meeting with students in small groups and a special assembly.

Ms. Matalin follows her husband, renowned democratic strategist James Carville, who spoke to students on Feb. 27. Chair of the Upper School History Department and AP Government teacher Dr. Ed Harris arranged the visit for Ms. Matalin, and guided the discussion during the assembly.

Ms. Matalin and Mr. Carville are often seen as a positive example of how people of different ideological persuasions can get along and even love each other in the divided state of our politics today. Dr. Harris began the assembly by asking Ms. Matalin about how she and Mr. Carville are able to get through their relationship without yelling and screaming.

“I’m always a little uncomfortable about this recurring question about our marriage somehow being representative of different people getting along without shouting. We do shout, we shout all the time. Marriage is not a democracy, it’s a ‘Momocracy,’” she joked.

Ms. Matalin, who predicted that Donald Trump “has a 100 percent chance to win” the election back in September, spoke at great lengths about his election and what it meant for the future of America.

“Was [Mr. Carville] still crying when he was here? [People] are still recovering from the election, to which I say: Get over it, whiners. What has happened now is a replication of Andrew Jackson. This is not unique to our history what is happening today. When you have a government contentious of the people, you get an Andrew Jackson or a Donald Trump,” Ms. Matalin said.

Last spring, Ms. Matalin revealed on Bloomberg Politics’ “With All Due Respect” that she had changed her party affiliation to the Libertarian Party, asserting that she was “a never Hillary” and “a provisional Trump.” When asked about her change in party membership by Dr. Harris, Ms. Matalin claimed that she “was not trying to make some big newsplash.” However, her announcement did make headlines across the country and led many people to question the future of the Republican Party.

“The essence of what I was saying is that you have to have and know what your principles are, be able to state them with clarity, and understand what they mean. Everyone keeps saying that Trump hijacked the [Republican] Party. How about we left the keys in the car with the motor running. I didn’t leave the Party, it left me,” Ms. Matalin said.

“My biggest beef with the [Republican] Party becoming as democratic as it was is that there is no freedom without responsibility. You cannot be responsible for yourself if a system is constantly put in place to aggregate the responsibility of taking care of yourself. That is not uncompassionate or bigoted. Some large faceless institution making these intimate decisions for people is not what the Republican party professes to be. They could have fielded two baseball teams out of the primaries and what do they produce? Donald Trump,” Ms. Matalin chortled.

When asked about the rise of the Bernie Sanders/Elizabeth Warren wing of the Democratic Party, Ms. Matalin expressed skepticism.

“Your generation likes Bernie, and he was just a stand in for Warren. I would say that I understand a lot of her views philosophically, but there is a lack of supporting data. When she comes [into the Presidential race], and she will, the Democrats are going to have to make a decision about which way they want to go. This stuff collapses, and then reality emerges,” she said.

Ms. Matalin also talked about the importance of listening to arguments from other sides. She and Mr. Carville have actually given up watching network and cable political shows that “only validate your own opinion because [they] make your mind go to mush.”

Throughout the day, Ms. Matalin encouraged students to be empiricists–reject red or blue labels and look whether or not it is working.

“In the real world, you all are going to leaders. The first thing people are going to tell you when you come up with an idea is ‘Oh we’ve never done it that way before, we’ve always done it this way’ and that is a big red flag. If you can’t measure it and it’s not working, stop doing it,” she declared.

Ms. Matalin spent the remainder of her visit meeting with students to answer questions in smaller groups. The Wells Fellow program was established by Damon Wells (Class of ’54) to bring distinguished speakers and scholars from different fields to Kinkaid.