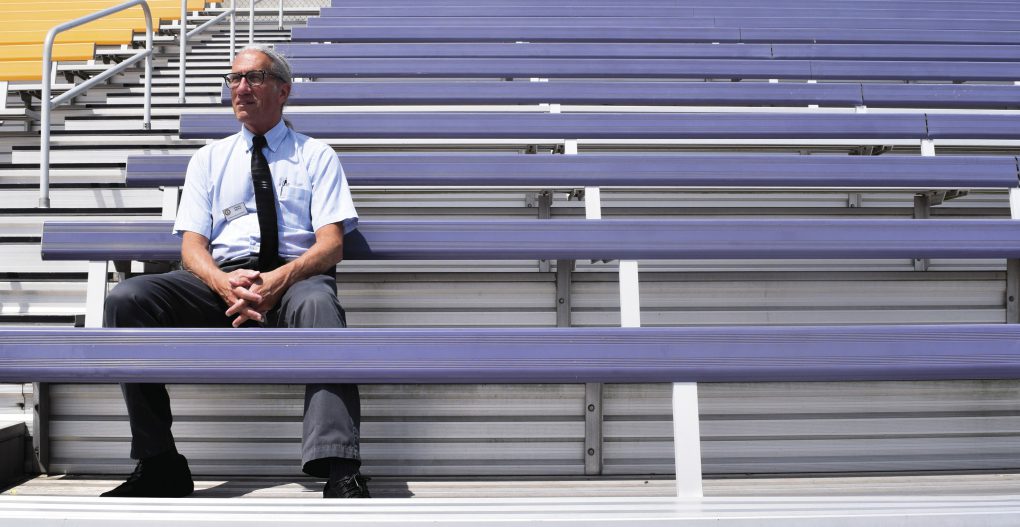 The bleachers at many athletic events–other than football–usually look rather bare. Few people come to each game: parents, siblings, and occasionally a friend will cheer on a game or two. But every Kinkaid athlete can trust that one fan while be there in the stands: Dr. Craig Bowe.

Dr. Bowe is a biology and neuroscience teacher at Kinkaid. Equal to his affinity for science and Lord of the Rings is his love for sports. At nearly every game, Dr. Bowe can be spotted in the bleachers with his purple fold-up chair, ready to watch his students compete in another game.

Dr. Bowe grew up as a major athlete in Minnesota. Throughout his childhood, he adored playing baseball. In high school, however, basketball became his main sport because he had a very inspiring coach, Mr. Bob Erdman.

Mr. Erdman exemplified how to be intense about something he loved—basketball. This infectious inspiration transferred to Dr. Bowe and pushed him to become really passionate about basketball as well. Dr. Bowe considers Mr. Erdman almost a “second father” who helped to develop in Dr. Bowe a “kind of intensity to really succeed.” Dr. Bowe still keeps in touch with his coach; he goes back up to Minnesota every summer to help coach Mr. Erdman’s basketball camp.

Like the typical jock, Dr. Bowe didn’t really care for academics in high school. He then went off to college at University of Minnesota where he played one season on the JV baseball team. In college, Dr. Bowe applied his intensity for a passion in experimental psychology. He worked through college to achieve a Ph.D. in the specialized subject, and he then went back to school to become a science teacher.

Dr. Bowe recognizes and appreciates the importance of participating in extracurriculars.

“It’s dangerous for anyone to get too narrowly focused in what they’re doing and what they want to do,” he explained. “For high school students, exposure to the arts broadens their field of vision and maybe even the direction they want to go in your life, and exposure to sports does similar kinds of things. Team sports, in particular, [taught me] how to be intense about something by being on the basketball team in high school. Then for me, it transferred into academics. You can get things like that out of the classrooms and different subjects, but you can get it out of extracurriculars, whether they be sports or arts; you can develop this willingness to push yourself in ways that you didn’t really think you could.”

Dr. Bowe loves attending all of the athletic and art events at Kinkaid because he enjoys watching students he knows on the field and the stage.

“[My favorite part about watching Kinkaid events is] when people I know are playing in the games because that’s when it’s best for me,” Dr. Bowe said. “I can watch the people I don’t know in college and in pros, but it’s more fun to actually know something about some of the people that are actually out there.”

Although he doesn’t have a favorite sport to watch, he enjoys going to football games because “football in Texas is a much bigger deal” than anywhere else he has lived, so the “general excitement at the games” makes the experience more enjoyable for him.

But the real reason why Dr. Bowe attends every athletic game and performance is so he can show his students that he cares about them.

“I don’t think I come across in the classroom as someone who particularly cares about them as a person,” he confessed, “which is too bad because it’s not true. What I care about in the classroom is how you are as a student of this subject. I’m trying to get across this material…If I can see them participating in things–not just sports–outside of the classroom, they have the chance to see that I do really care about who they are.”

In the past few years, he has given each of his freshman students a notecard on the first day of class. On that card, he tells every student to write down any extracurricular activities that they are interested in. He can get to learn something about every one of his  pupils and makes sure that he can support their various endeavors outside of the class.

It can become easy for students, especially for us pessimistic high schoolers, to assume that teachers don’t take any interest in us. When a teacher giving back a poor grade or assigning an impossible assignment, we console ourselves by declaring that the teacher wants to watch us fail. But if we keep using this excuse, we will start to blame others for our own failures, which helps no one in the end.

Believe it or not, teachers really are concerned about our well-being. They channel their passion and knowledge for a subject into sparking that passion and knowledge in others. Teachers don’t arrive at Kinkaid at 7 a.m. to just kill time. They want to see us go on and succeed in life, so they can truly say that they had an impact on our success.

Julia Lasater (11), a three-sport varsity athlete who also performs in many plays, explained, “It’s really great to see teachers come to the game because it shows they care about us at a level deeper than the grades they give us. Dr. Bowe comes to almost every home game (especially during basketball season) and it feels good to have that support from other parts of the Kinkaid community besides parents.”