#TrustTheProcess and the Art of Tanking in the NBA 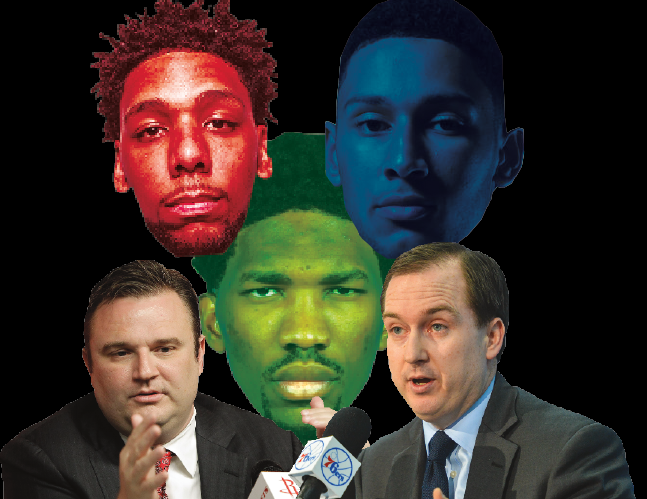 “Winless for Wiggins.” “Lose ’em all for Wall.” “Play poor for Okafor.” “Blow the lead for Embiid.” “DeRailin’ for the Australian.” Over the past few years in the NBA, the art of tanking, losing games on purpose in hopes of attaining a higher draft pick, has revolutionized how people think about the game of basketball.
It all began back in 2012 when the Philadelphia 76ers were eliminated in the second round of the playoffs by the Boston Celtics. That offseason, the owners of the Sixers, Josh Harris and David Blitzer, decided to trade one of the team’s best players, Andre Iguodala, for 31 year-old Jason Richardson and Andrew Bynum. That trade blew up in a bowling-induced smoke (Bynum tore his ACL while bowling) and thus, the process was born when the owners brought in Sam Hinkie and his radical ideas on rebuilding an NBA team as general manager a year later.

Hinkie, a summa cum laude and MBA graduate from the University of Oklahoma and Stanford respectively, worked at Bain Capital and the Houston Rockets before moving to Philadelphia. In his seven years with the Rockets, Hinkie promoted the use of advanced statistics in basketball while second-in-command to general manager Daryl Morey.
Interestingly, the Rockets under Morey chose not to tank after losing franchise players Yao Ming and Tracy McGrady before the 2011-2012 season. The Rockets managed to stay competitive and decided to try to acquire superstars via trade and free agency rather than the draft. In an interview with The Kinkaid Falcon in 2015, Morey said that “we [the Rockets] absolutely looked at strategies to get a high pick in the draft to restart the team. There were many options on how to restart the team and going for that high draft pick is the most reliable and least risky.” However, the Rockets—possibly because of pressure from the ownership—decided not to tank for a high draft pick, and it took them three years to escape the dreaded “middle ground” of the NBA (low lottery pick while not serious contenders).
Eventually, the Rockets were able to rebuild without having a high draft pick through a progression of hundreds of transactions that resulted in the trade for James Harden and free-agency signing of Dwight Howard. That assembled roster culminated in a trip to the Western Conference Finals in 2015. While the Rockets are now moving in a new direction centered around James Harden, they showed that rebuilding without a top pick is a viable alternative.
The Celtics have also paved their own rebuilding strategy by trading aging stars in Kevin Garnett and Paul Pierce to the Nets for high draft picks in the lottery for the next two years. This bold transaction at the time, along with trades for Jae Crowder and Isaiah Thomas, allowed the Celtics to remain competitive while also trying to acquire superstars through the draft and free agency.
Meanwhile, Morey has continued to defend his protégé, Hinkie, and the tanking strategy that Hinkie adopted in Philadelphia. In an interview with popular sports analyst Bill Simmons, Morey stated that “If I had the starting point he had, I think he made all the right choices.” And that is an interesting argument. The Rockets did have a stronger team their first year without Yao and McGrady than the terrible roster that Hinkie inherited in Philadelphia.
Jrue Holiday struggled to become an elite point guard; Thaddeus Young failed to perform while on the Pacers and Nets and has struggled with injuries; Spencer Hawes is still barely playing in the league; these were the best players available to Hinkie’s Sixers at the time. Trying to follow the path of the Rockets and Celtics would not have worked for this weak roster after Andre Iguodala and Lou Williams were shipped out in the summer of 2012. Thus, Hinkie decided that the best chance for the Sixers to acquire a superstar was through a high draft pick. To help fans deal with the years of dreadful basketball, Hinkie created the now infamous mantra: “Trust the process.”
Players, fans, the media, coaches, and even other front offices accused Hinkie of sabotaging the Sixers roster to maximize loss numbers. This outside pressure had no impact. Hinkie flipped almost every player left on the roster with value that was not on a rookie or veteran contract for draft picks and young prospects. The team won just 47 games in three seasons. Sixers fans despaired.
Hinkie decided to step away from the Sixers less than a year ago, as the progress that he had hoped for was slower than the ownership was expecting when he was hired in 2013. He dropped a 13-page manifesto (http://www.espn.com/pdf/2016/0406/nba_hinkie_redact.pdf) on his way out the door, detailing his thoughts while at the helm of the Sixers. In this 7000 word resignation letter, Hinkie defended his radical strategy and rebuilding process. “There has been much criticism of our approach. There will be more. A competitive league like the NBA necessitates a zig while our competitors comfortably zag. We often chose not to defend ourselves against much of the criticism, largely in an effort to stay true to the ideal of having the longest view in the room,” Hinkie said.

However, the process had already begun: Through the draft and free agency, Hinkie had managed to set up Philadelphia to be a powerhouse in the Eastern Conference in the next decade by acquiring Nerlens Noel, Jahlil Okafor, Joel Embiid, Dario Saric, Ben Simmons, and Robert Covington. While each of these players is undoubtedly talented, Hinkie’s strategy of drafting the best available player regardless team’s needs and fit, combined with unfortunate injuries to top prospects, added many difficulties to the process that Hinkie had hoped would come to fruition more quickly.

Joel Embiid and Ben Simmons will have both missed their entire first season in the league due to injury while Dario Saric spent his first season playing in Europe. Nerlens Noel and Jahlil Okafor have both also struggled to stay healthy and find minutes in the clogged Sixers frontcourt. Noel said that the Sixers situation with three starting-caliber centers “doesn’t make any sense.” He has also demanded more playing time, saying, “I need to be on the court playing basketball. I think I’m too good to be playing 8 minutes. That’s crazy. That’s crazy.”

While there have been obvious growing pains, the benefits of “trusting the process” for so many years are becoming increasingly apparent this season. The Sixers won 21 games before All-Star Weekend (more wins than all of last season), and Embiid looks to be the cornerstone of the franchise for the next decade if he can remain healthy. Even though Hinkie himself was a casualty to the process, his dream and radical rebuilding strategy lives on in the man nicknamed “The Process,” Joel Embiid.

Whether or not you support the tanking strategy, it is undeniable that Hinkie has changed the way that people will think about rebuilding an NBA team in the future and has set up the Sixers for years of success.

In any case, the 2017 Tankapalooza Catchphrase Finals look something like this: “Stay in a funk to get Malik Monk,” “Freefall for Lonzo Ball,” and “Lose like hell for Markelle.” Please let us know if you have any other suggestions at thefalcon.kinkaid.org. Oh, and always #TrustTheProcess.

Is your favorite NBA team stuck in the dreaded middle ground between a top pick and contending for a title? Tired of the mediocrity? Mope no longer. Undoubtedly you have noticed the 76ers fans crawling out of the woodwork as their shameless tanking over the past four years is starting to pay off. Jealous of their exciting roster and potential five center lineups? Don’t worry. Here is our five-step guide to flawless tanking, inspired by the doyen of tanking himself: former 76ers general manager Sam Hinkie.

To tank successfully, you must consider what the end result of the years of pain and suffering for fans and everyone associated with your team will be. While the obvious answer is to win more than 20 games, the real goal should be a championship. Thus, if you decide that your current best player cannot be the best player on a championship team, trade them for as many assets as possible. In recent history, the Sixers have parted ways with Jrue Holiday, Andre Iguodala, and Michael Carter-Williams for a haul of three-first round picks and Andrew Bynum. The most important part of self-sabotage is to make sure that your team is not just somewhat bad. You want to be historically bad.

2. Come up with as many ridiculous lineups as possible

When drafting players with your slew of draft picks, it’s imperative to always draft based on talent alone. Most teams will try to select players based on fit and their needs, and this can easily be used to your advantage as it will allow you to say things like “we think he has great potential” and “we are going to get creative with the lineups this year.” While we have yet to see the Sixers play Noel, Okafor, and Embiid together on the court, it seems inevitable at some point. I think everyone is looking forward to next season when the Sixers roll out their version of the Warrior’s death lineup: Ben Simmons (6’10”), Dario Saric (6’10”), Jahlil Okafor (6’11”), Nerlens Noel (6’11”), and Joel Embiid (7’0”).

3. Create fake injuries for any good players and extend the recovery time for all injuries

The best way to ensure that your team doesn’t win too many games is to have your best players not play. The Sixers have really taken this step to the next level. Their top draft picks from the last three years (Noel, Embiid and Simmons) will have all missed their entire first season in the league due to injuries that were probably not season-ending. Jerryd Bayless was said to be out with a “sore wrist” for almost two months, Jahlil Okafor missed 10 months for an injury that was supposed to only shelve him for two months, the list goes on and on.

4. Try to affect the playoff race just for fun

In 2014, the Sixers traded one of their best players at the time in Evan Turner as well as Lavoy Allen to the Pacers (who were challenging to win the East at this point) in exchange for Danny Granger, who they proceeded to cut. Granger then signed with the Clippers, which means that the Sixers essentially helped two contending teams while saving just $500K. If someone tried something like that in a fantasy league, they would quickly ignite a 200 text message chain full of insults and obscenities.

This one is obvious. To complete your rebuild, you must at some point sign this two-time Shaqtin’ a Fool Most Valuable Player. McGee made a quick five-game stint in Philadelphia, where he shaped his legacy before joining the Warriors this year. Believe me, if you’re throwing away your season, you want McGee involved.