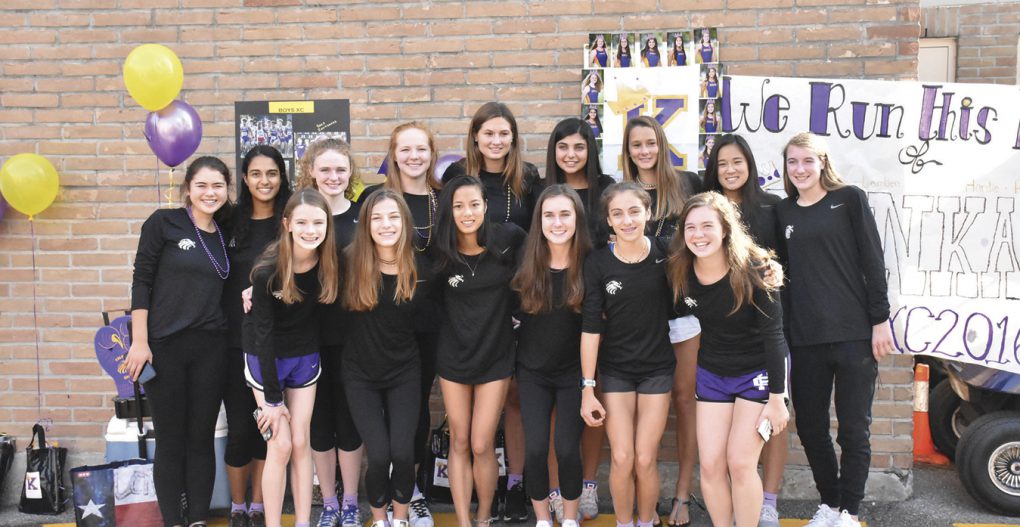 “[dropcap]Y[/dropcap]ou have logged over 515 miles! (And that does NOT include summer mileage) – included in those miles were repeat miles, intervals including 1200’s, 1,000’s, 800’s, 600’s 400’s, up-tempo runs, hills, pace golf, 200’s – you get the idea! PLUS, 325 Strides Sprinted, core exercises, 88 kettlebells lifted, 92 weight bags squatted, 120 medicine balls twisted, and 84 ropes whipped!” Girls cross country Coach Cheryl Mitchell sent this message to the team prior to their SPC championship meet.

No one ever said winning it all was supposed to be easy. But the hours and miles of running paid off with the girls cross country team finishing the 2016 season at the top of the mountain.

The team attributes part of their success to their daily grind and routine. After a ten minute warm up everyday on the track, mobility exercises, along with different drills and slides started off practice. From there, the team ran between two to seven miles daily.

To diversify their runs and provide the team with new landscapes and environments, some of their practices took place at either Memorial Park or Spotts Park, the most challenging trail for everyone.

“There was not one practice at Spotts Park that I didn’t doubt being able to make it all the way through. Finishing a Spotts Park workout was always the most rewarding,” Mitali Sharma (12) said.

The girls this year, led by experienced and prepared upperclassmen, still stumbled out of the gates at start off the season. With only one top three finish before the championship meet, emotions were running high and it became more and more difficult for the team as a whole to keep their composure.

“As the season progressed, the workouts intensified, which in turn led to the mentality being intensified,” Marie Parra (12) said.

Although the team had won the South Zone meet two weeks prior to the SPC race, they refused to be caught up in the moment.

“We had a lot of high points this season, but one of the most exciting ones was when we crushed St. John’s at South Zone and knew we were ready for SPC,” Margaret Durning (12) said.

The bus ride to Austin did not help in putting the team in the winning spirit. Pitch dark on the road when they headed towards St. Andrew’s Episcopal School early in the morning. With each runner on edge, the team participated in their last jam-out session together, before anxiously approaching the start line on the cool and crisp November day.

“Some people put in headphones and keep to themselves while other people do as much work as they can to get psyched up. Everyone was on edge before the race. You could tell we really wanted it,” Sharma explained.

Greenhill School in Dallas posed the biggest threat to their first place aspirations in the race. But with all the other schools ready and able to compete with the Falcons, the team believed the only team that could beat them was themselves.

“During the race, it was clear runners were in pain. Their legs were covered in mud and they were trudging up the hill, trying to pass up other opponents,” Parra said.

Trying to catch their breath again, the Falcons looked disappointed in themselves as they waited on the official results of the meet. The race was too close for confidence. Then, it happened.

“I don’t even know what happened afterwards. In the moment when they announced runner-up — Greenhill — we all in unison started jumping up and down and screaming at the top of our lungs and embracing each other. We may not have won the sportsmanship award, but we won SPC and we were too excited to care,” Parra recalled.

The core of the girls cross country program is set for the future with thirteen underclassmen already involved. The young runners put their potential on display after Camila Vicens (9), Alexandra Blake (9), and Mikela McCauley (10) all finished in the top ten in the race.

When asked for advice for the younger members of this years team that will look to repeat as SPC champions next fall, Sharma said, “Stay positive and keep reaching higher because this is just the beginning. Always set impossible goals because by the end of the season, they won’t be so impossible anymore.”

As the senior captains hand over their SPC championship winning girls cross country program to future Falcons, they take with them the pride of another dominant year and the memories of an unforgettable season.