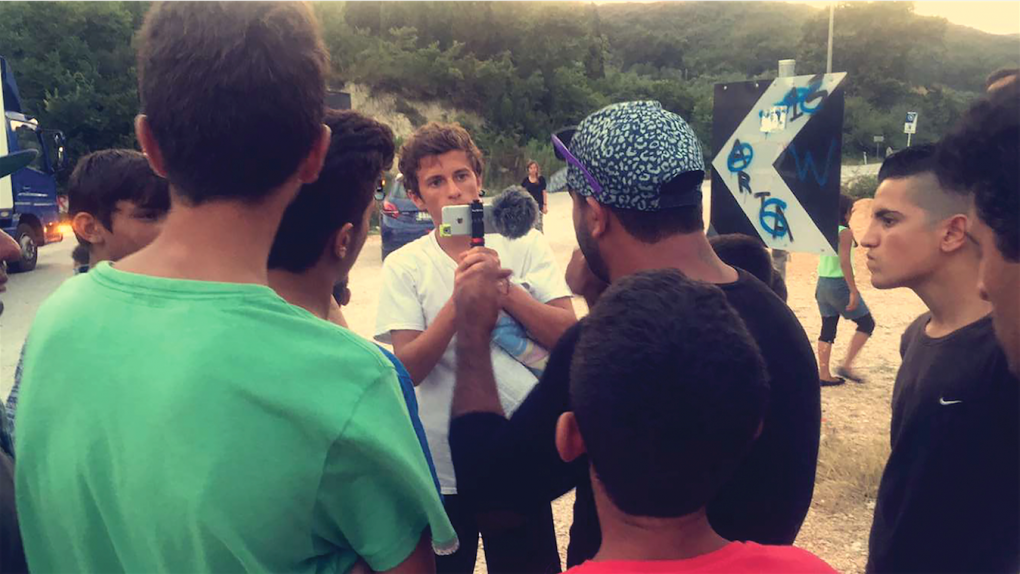 [dropcap]W[/dropcap]hile local media attention has shifted off of the refugee crisis in Europe, the problem has not gone away. Two Kinkaid students are utilizing their filmmaking skills to shed light on the human side of the refugee situation in Europe through a documentary video of their experiences at a refugee camp in Greece last summer.

The unending wars and terrorism in the Middle East, and the extreme poverty in Africa are the primary reasons why an estimated one million people have journeyed to Europe in hopes of finding a better future. Many hope to reach welcoming countries like France and Germany, but those two nations can only accept so many people.

With some of these European countries closing their borders to refugees, the situation within Greece has become especially challenging, as Greece has been the most popular gateway to Europe for refugees fleeing the Middle East and North Africa. Of the 57,000 refugees still living in Greece, 10,300 people live in temporary camps set up on the islands across from the Turkish coast. These people risked their lives, and often gave smugglers all of their money for passage to Greece.

The Greek camps however, are not big enough to welcome all of these refugees. They need more space, food, clean water and volunteers. Refugees must live in tents and empty buildings, often in places like abandoned airfields and even former Olympic sites. Initially, the refugees only stayed for a few nights on their journey northward, but now they must stay indefinitely.

People flock from all over the world to come help these refugees. Two Kinkaid juniors, brothers Dz and Socs Zavitsanos came as well.

The Zavitsanos, twins, go to Greece every summer for several weeks to see family. This year, they wanted to take advantage of their location by visiting the refugee camps; they were interested in this situation they had heard so much about and saw it as a good opportunity to get more insight. In July, Socs found the Facebook page for a relief group called Aid for Refugees, which listed the group’s contact information. He called the number listed. Shortly after, he and his brother drove up to the camp.

They visited a camp in Filippiada, located in Northwest Greece. The camp opened in March 2016, and is now the “home” to over 600 Syrian and Afghan refugees. Half of the population in the camp is under 18 years of age.

“We wanted to go to experience the whole refugee situation. We wanted to see them in real life, and it’s also community service work that we could do over the summer,” Dz said.

The media sometimes portrays the refugees as aggressive and unfriendly, but the brothers had a very different impression.

“The first thing I saw was a group of little kids coming up to me and giving me hugs. The people were all very friendly,” Socs added.

The camp was filled with tents surrounding a central area where the children could play soccer. Hygiene is a challenging issue. If a lake or river is near the camp, people can wash there, otherwise camp staff tries to set up mobile showers at the back of the camp. The mainland camp they visited was very fortunate in that there was a river running through the back of the area.

The brothers spent three days in the camp. While there, their daily lives were very busy. In the mornings, they handed out packs of water to families and helped serve breakfast. They ate lunch with the refugees, and though the food was not particularly flavorful—mostly “very simple food: rice, tofu, eggs that were mushy and blocky, potatoes”—it is enough for these refugees to survive. Every afternoon at 5:00 p.m., the parents and kids would compete in a soccer game. “It was good to see people with smiles on their faces during the games,” Dz recalled.

Dz and Socs took lots of photos and interviewed several refugees. They are combining their film and photo footage to create a documentary for their Narrative Filmmaking class with teacher Mr. Ryan Gillentine.

One of their unforgettable encounters was with a 21-year-old Syrian refugee named Abad. He told the Zavitsanos about his escape from Syria.

“He [talked] about how ISIS dominates Syria, how he had to escape without them knowing, and his experience coming to Greece,” Socs said. “It was a pretty fascinating story.”

Abad knew some English, but the brothers also successfully used Google Translate to communicate with him.

The Zavitsanos brothers plan to submit their film to the South by Southwest (SXSW) Film Festival in hopes to accomplishing their biggest goal: “to help people in America relate to these refugees and the adversity that they face on a daily basis.”

Socs added that they would like to help spread awareness and motivate viewers to get involved by contributing to the relief efforts. “There are a lot of support groups out there at completely rely on donations from other people,” Socs said.

Socs and Dz hope that by the time they return to Greece next summer, their refugee friends will all have found permanent homes somewhere in Europe.