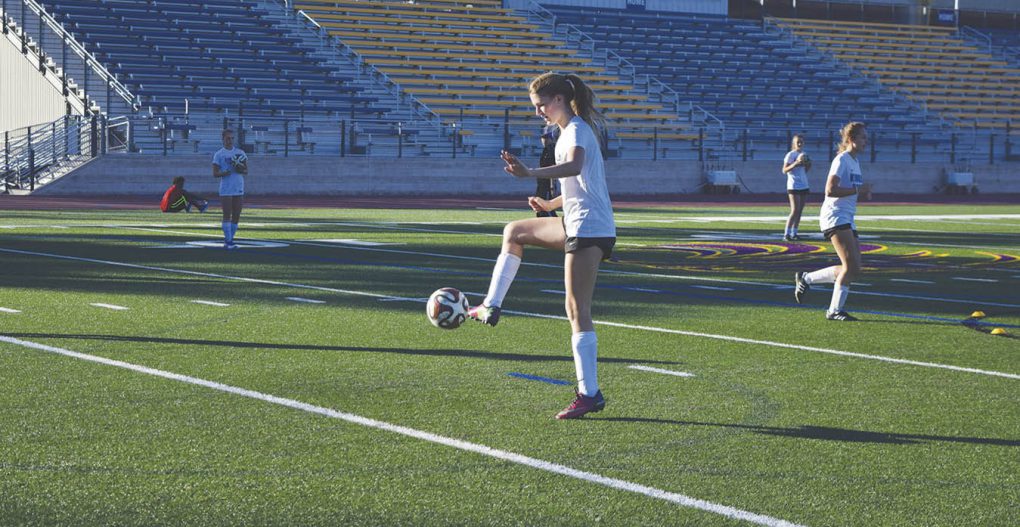 BY ELLA MORGAN AND SARAH BASS

[dropcap]T[/dropcap]he swim team has started the season strong with a team of 39 members trying out for places on varsity or JV. The boys and girls’ varsity teams will be lead by captains William Gage (12) and Mary Helen Burt (12).

As captains, both seniors lead the team in many ways. Twice a week during practice, the captains get to chose a drill or a game that the whole team takes part in.

“We play a lot of sharks and minnows. I hosted a cannonball contest last week so, we usually do activities that aren’t too hard,” Burt explained.

The captains also work with managers to organize the creation of locker signs and boost team spirit. The girls team placed second in SPC last year and hopes for first this year.

“We have a lot of really good freshmen and sophomores that have been swimming year round,” Burt said.

The girls’ team is hopeful for a great season and the boys and girls’ teams will have their first meet of the season on Dec. 2.

Boys and girls varsity basketball have also been working hard this season. The boys came in fifth last year and the girls came in second in the SPC tournament. The boys team is lead by captain Jake Shaper (12) and the captains of the girls team are Chinaza Ndee (12), Jasmine Smith (11), and Alexis Johnson (12).

“This year we are looking to have great teamwork and to work together,” Zachary Bell (11), a shooting guard on the boys varsity team, said. The boys team faced Emery Weiner on Nov. 15 in their first home game and won 85-45.

The girls team has won five games and only lost once to Incarnate Word high school (San Antonio).

“At times preseason was so exhausting, but I definitely think it got our team in a basketball mindset since most of the girls on the team were coming from volleyball,” said Johnson. This year the varsity team added three new additions, Nakeeya McCardell (9), Trinity Curry (9), and Chloe Hunter (10).

“I’m most excited about building our chemistry, we are already a pretty skilled team so I think when we all learn how to play with each other we will be really good,” Johnson said. The whole team is working on layups and getting better to secure their goal of winning first place in this years SPC tournament.

With new coaches and players, the soccer teams have worked hard to prepare themselves for this season. Losing six seniors last year, the boys team has had to quickly adjust, but with four freshman and four juniors added this year, they are already showing signs of success. In their first game on Nov. 18, the team came together and showed they’re ready for a successful season, beating St. Pius 4-0, with goals by Phin Sprague (12), Mitchell Roberts (11), Ace Nicolao (12), and Willy Ducharme (12).

“Our goal is to win the SPC Championship this year,” Ducharme said. “We are going to train hard everyday in practice to get that done.”

The girls soccer team has already seen success in their first game against Incarnate Word Acadamey, winning 8-1. “I am excited to compete in SPC,” said first time varsity player, Laine Woelfel (9). The girls are looking forward to an exciting and successful season.

The wrestling team has seen success in their first meet by winning three out of four matches.

“We were down a couple guys, but it was definitely a good way to start off the year,” said Noah Chan (11). Chan hopes to win prep nationals this year and win prep state with the team. Multiple athletes are injured this year, but Max Mannetti (11) is optimistic for the season.

“Once we get all these guys back we will be good to go,” Mannetti said. “We’re going to have a real good season this year.”