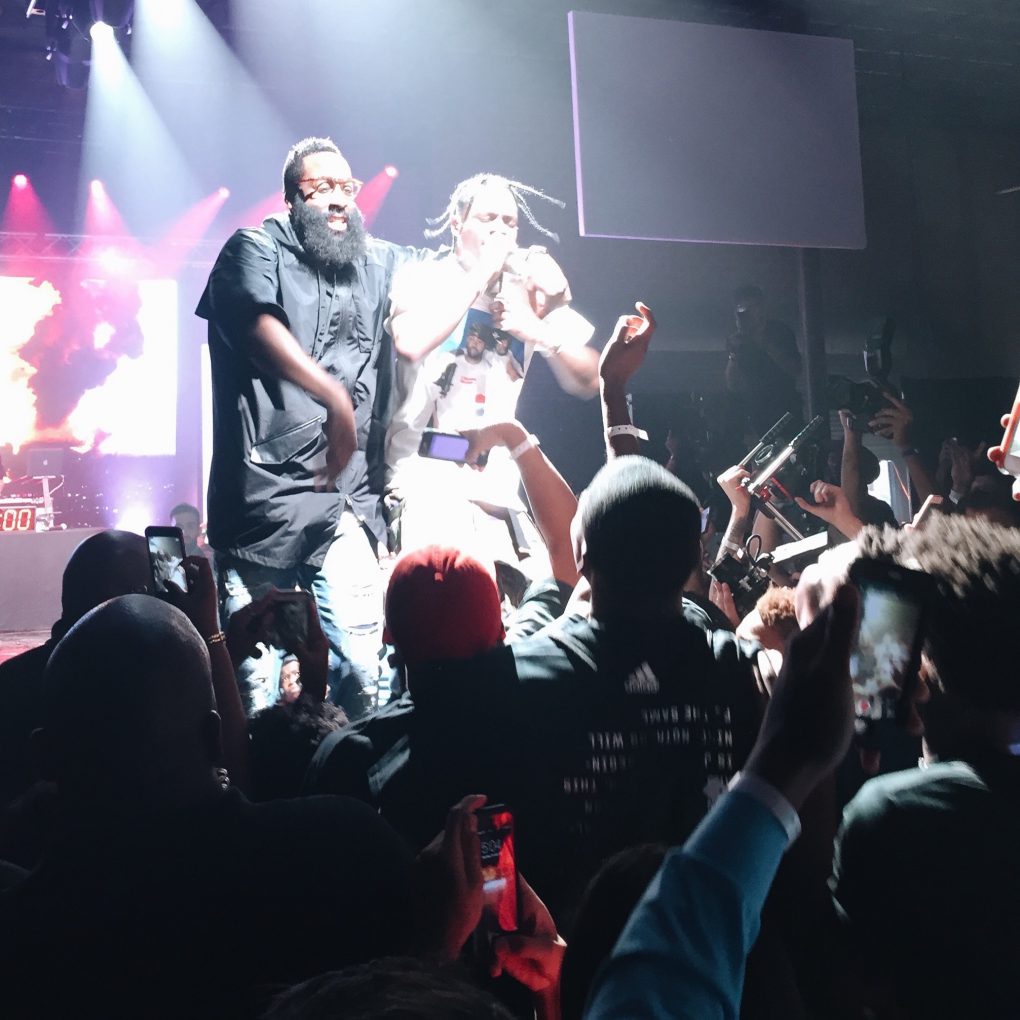 On Saturday, Oct. 22nd from 2-5 p.m., the majority of students were getting professional makeup done, squeezing in a few hours of homework, and anxiously waiting for the Homecoming Dance. However, a few students, including members of the basketball team, had their Saturday afternoon plans interrupted by James Harden and Travis Scott.

Adidas hosted a secret launch party for the James Harden x Adidas clothing line, Harden Vol.1, and surprised guests with performances by Travis Scott, Young Thug, Slim Thug, and Z-Ro. The guests primarily consisted of Harden’s family and invited media from around the globe, but unassuming Houstonians heard the news from various sources including Twitter.

Upon arrival to The Secret Group, the hosting venue, guests were greeted with a locked front door. Truly determined fans eventually found a back entrance after trekking through dirt paths and parking lots in the blistering heat. (Free tickets, food and water were the rewards for a fan’s determination.)

Inside, an Adidas video booth was set up along with various basketball-themed settings, made for documenting on social media. There was even a James Harden geotag sticker for Snapchat users. Towards the back of the venue, over a small stage, a digital clock counted down the minutes to James Harden’s appearance.

Once all Instagram and Snapchat needs were satisfied, the afternoon began. Harden strolled on stage, delivered a humble speech about becoming successful, and left the stage. Silence and confusion swept the crowd. Nobody knew exactly what the day’s events would entail. Finally, a beautiful girl decked out in a crop top, sweatpants, and expensive-looking sneakers glided on stage. She was joined by an incredibly attractive man . The Harden Vol.1 fashion show had begun.

The Harden x Adidas clothing line consisted of all-black sports wear that could easily be mistaken for cool, New York Meatpacking District-esque streetwear. The basketball shoes were a hit amongst the mostly male audience. Once the fashion show finished, the giant Harden tapestries that covered the brick walls of the venue collapsed, revealing his collection that hung on a chain fence that was hiding behind Harden’s portrait.

Not quite knowing what to expect next, guests hung around, hoping the Twitter rumours of a Travis Scott appearance were true. Half an hour passed before Slim Thug, a famous Houston rapper who has been spotted a few times on the Kinkaid campus, took the stage by storm. Adorned in gold chains and black sunglasses—a sharp contrast to when students saw him on campus trying to keep a low profile—Slim performed a few solo songs before inviting Z-Ro, another Houston rapper, onstage for a collaboration song.

The audience was noticeably divided between Houston rapper fans and Travis Scott fans. After the Houston rappers finished their set, guests were tortured with the idea that Travis Scott might have bailed on the party and wasn’t going to deliver a performance to his super-fans.

An hour passed and the filler DJ worked relentlessly to try to keep the audience in high spirits with popular rap songs at an incredibly loud volume. Finally, just as people were about to leave, the lights dimmed and Travis Scott casually walked through the three-row audience to claim his stage.

The sound system glitched and Scott couldn’t address the crowd. He began shaking and jumping and making random noises. Some people thought he was seizing. Thankfully, Scott was just being himself and warming up to spit his rhymes.

Sound techs quickly fixed the issue, and Scott debuted his new music video “Wayback.” The video featured Harden playing basketball and included lots of Adidas product placement. Scott proceeded to rap a stellar, high-energy performance. He invited Harden onstage at one point. The extremely excited all-male audience at the very front predictably began horseplaying around, as expected from teenage boys receiving a personal performance from their favorite rapper. Scott made the whole experience for those kids even more personal by telling the security not to get involved and let them have fun.

The event was a marketing coup for Adidas, who provided an incredible space for the talented artists to display their work in an intimate setting. The secret factor added a personal touch, making the experience unforgettable. There was just enough people invited to blow up Twitter, Instagram, and Snapchat, but few enough people to qualify it as an exclusive event.