The Value of Third Party Candidates 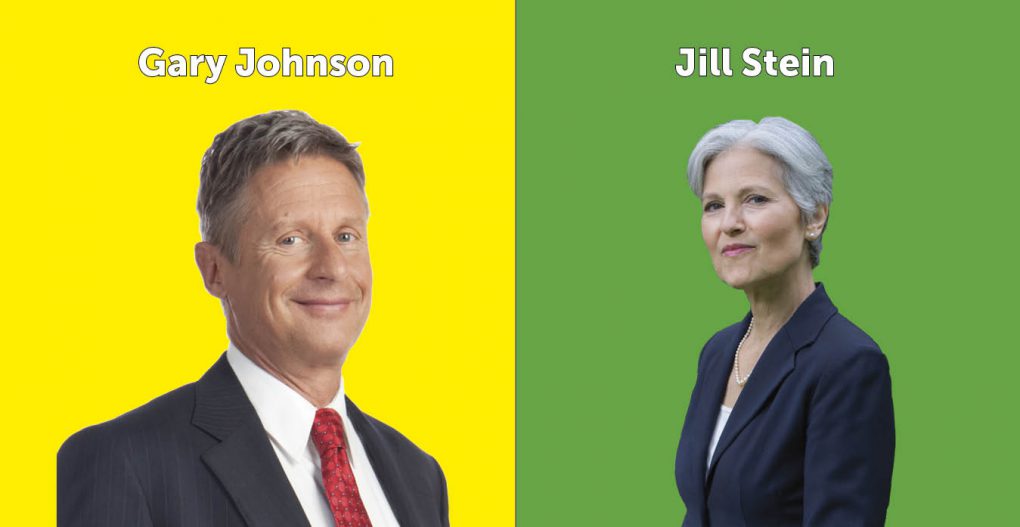 In the election of two “evils,” some may have forgotten the quiet third party candidates. Libertarian Gary Johnson and Green Party Jill Stein have led relatively silent campaigns against the noise of Trump and Clinton and some may wonder why they even bother. Political pundits have referred to third party votes in the past as wasted or protests votes, and the point still remains valid. At this point in the election, with only 11 days left and controversies and accusations sprouting daily from news outlets, it seems undecided voters are switching rapidly. And some may be moving from the traditional two party system to the Libertarian or Green Party Candidates.

Former Governor of New Mexico Gary Johnson ran for president in 2012 as a Republican on a Libertarian platform but withdrew to stand as a Libertarian candidate instead. He earned the Libertarian nomination this year alongside former Governor of Massachusetts and Libertarian Vice-Presidential Nominee Bill Weld. In general, Libertarians stand for a pure, unadulterated form of liberty: the reduction federal government, marriage equality, no gun control, the legalization of marijuana, and a free market economy among other things.

Environmental activist and physician Jill Stein secured the Green Party nomination in both 2012 and 2016 and runs with human rights activist Ajamu Baraka. The Green Party stands for first and foremost protection of the environment and climate change policy.

In an election that everyone eagerly waits to end, at first glance, the third party seems enticing: candidates with substantially different policies, new faces, less drama, and in general promising options for the American people to choose from. However, the third party system is too insignificant in this election, and really in every election since no third party candidate has ever won.

The main problem with the third parties is insufficient public awareness. Too few people really understand what they stand for. If I asked you the general platform of the Democratic or Republican parties, you would be able to list their respective policies. But what about the Libertarian or Green Party? What are their stances on torture? How do they approach reforming public education? What are their tax policies? I couldn’t even tell you myself without a Google search first. And that’s the first issue with third party candidates and their parties; the majority of regular Americans don’t truly understand their goals, their history, or their values, myself included.

The third party system is caught in a vicious cycle perpetuated by the two-party monopoly of the Democrats and Republicans. Gary Johnson has claimed numerous times on Twitter that if he were able to participate in the debates, he would perform tremendously well and prove to undecided Americans he was a viable choice. But why can’t he participate? According to the Commission on Presidential Debates, a candidate must poll at least 15% among the national electorate to be invited to the debate. At the time of the first debate, Johnson polled at 7% and Stein at 4%. There lies the problem. Because of the traditional system, it becomes more difficult to understand the third party candidates. Perhaps if Johnson and Stein had been allowed onto the debate stage, the childish rivalry of Trump and Clinton would have been diminished, leading to actual discussion of the candidates’ policies. Maybe Johnson and Stein could have convinced audiences why they are a decent pick for leading the nation if they could target voters from a bigger stage, rather than having to utilize Twitter, Facebook, or small interviews here and there on cable news networks.

Johnson’s solution to this two-party monopoly is wittily phrased into a slogan: the Democrats and Republicans “are the dinosaurs, and I think we’re the comet in this whole equation,” he commented in a CBS interview. Similarly, Stein said, “if you can’t put your values into your vote, then democracy is lost at sea.”

Third party candidacies are often seen as futile. Regrettably, the American public has been left with a difficult choice to decide who should be in the White House. Johnson and Stein use this desperation to their advantage, or so they hope. Johnson again takes to Twitter to convince the public, asking for everyone to simply “vote their conscience.” The candidates target the ethos and pathos of voters, asking them to think logically and to vote for a nominee that stands for their beliefs, rather than voting to prevent an opponent from reaching the White House.

Having said all this, despite the numerous setbacks that decrease the value of third party candidates, it would seem obvious that these third party nominees need to snatch every opportunity to prove to the American public they are fit and worthy for the presidency. But Gary Johnson’s multiple gaffes have done nothing to increase the credibility of his party. After asking “What is Aleppo?”, after failing to name a world leader he admired (until saved by his arguably more capable VP Bill Weld), and after proudly stating he stopped smoking marijuana in preparation for his presidential campaign, Johnson missed a valuable opportunity to demonstrate his knowledge and preparation.