You Can’t Take Them With You: Show about family bonds actors and seniors 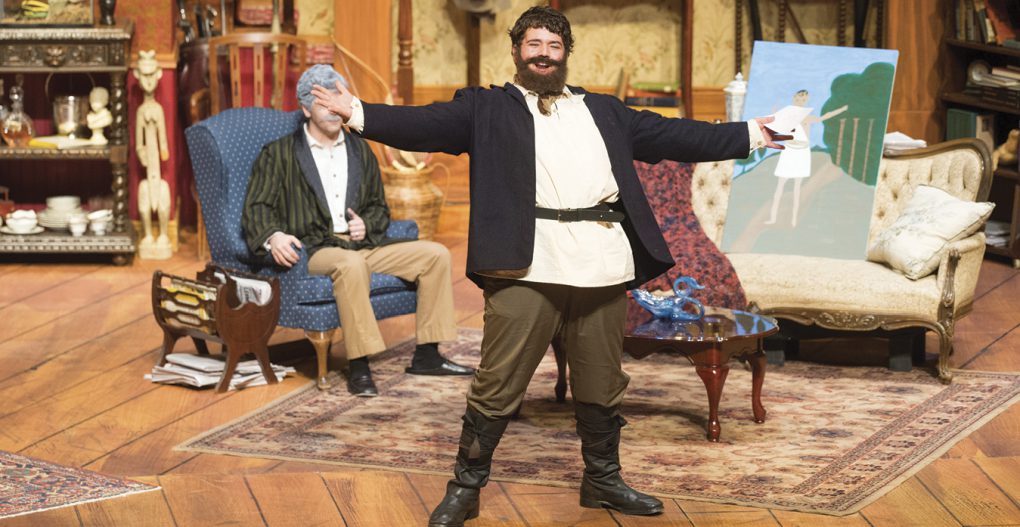 [dropcap]O[/dropcap]n Oct. 14 and 15, Theatre Company performed “You Can’t Take It With You,” a comedic, three-act play about a 1930s New York household and their various problems with the government and relationships. It is a highly acclaimed play, having won the 1937 Pulitzer Prize and showing on Broadway 838 times since 1936. This family-oriented play served as a way for the Theater Company to bond, especially for the two Looser sisters, as the seniors prepare for their final season at Kinkaid.

Two completely different families are forced together when their children, Alice Sycamore and Tony Kirby, get engaged. At the beginning of the play when the families first meet, there is too much tension for Alice Sycamore, played by Eloise Detmering (12), to overcome. She believes the families are just too incompatible, so she decides to leave town, ending her relationship and abandoning her family. However, by the end of the show, Tony Kirby, played by Ashton Lambert (11), convinces her to stay with the help of the rest of the Sycamore family.

“Kolenkhov,” the Sycamores shouted in unison as Boris Kolenkhov burst in through the door. Kolenkhov, a bear of a Russian man adroitly played by Ameer Mustafa (10), teaches dance to the Sycamore’s daughter, Essie Carmichael played by Rebecca Noel (12). Practically part of the family, Kolenkhov helped ease tension between the Kirbys and Sycamores. When they first met, he heaved up Mr. Kirby, played by Matthew Kirkwood (10), and threw him on the floor as if they were wrestling, which brought about bursts of laughter from the crowd and some gasps.

Brock Looser (12) began her fourth and final year in Theater Company in the role of Penelope Sycamore, mother of the Sycamores. For the Loosers, acting has always been a family affair. Her parents met in theater during high school and Brock and her younger sister, Avery (10), have been working on shows together since they were little. Now as high schoolers, they jam out to Beyonce and drink Very Berry Hibiscus refreshers from Starbucks before every show.

Avery has always been a performer, but last year when Catie Asarch and Emily Grove (then-seniors who graduated in 2016) asked her to stage manage their one-act plays, she said yes.

“They were the two most talented stage managers at Kinkaid, so it was a huge honor for them to ask me, but I was super nervous!” Avery said.

Avery realized how vital stage managing is to the show, so when Ms. Michelle Ludwig, Director of Drama, asked her to manage the fall play, she enthusiastically agreed.

Brock has no idea what to expect at college next year without Avery: whether in the same shows or different ones, they have always worked alongside each other. She is excited to attend college and experience more independence, but doesn’t know what to expect without the comfort of having her sister with her. She is thrilled to experience something so different, but sad to be away from her favorite people, and her favorite people are not quite ready for her to leave.

They always do a “senior circle” before the Sunday show, and before the last performance of “You Can’t Take It With You”, Brock was mentoring the cast.

“I am so happy that I got to perform my last play at Kinkaid with people who are like my family members, and especially one of my own family members,” Brock said.

That was when Avery lost it. She burst into tears in the middle of the circle.

There were 19 actors in the “You Can’t Take It With You.” The cast of the play is always much smaller than the annual musical production, which allows the group to really bond. Even though they were already close from working on previous shows, this show was special.

“It is really fun to get to do a straight play with a smaller cast, especially this play since it’s family-oriented. We’ve all grown so close,” Brock said.

For Brock, the most important part of this show is to focus on her character’s intention because she wanted to tell the story of the Sycamores accurately. Her favorite scene is when the whole family comes together to play the game, and they all get to hear about the Kirby’s secrets through an unexpected and inconvenient way, but in the end brings them all together and they become closer.

For Avery, the trick to not missing calls during the show is to rely on her other crew members. Knowing they have her back, and remembering that there is a talented cast that can recover even if mistakes are made calmed her before the shows. During tech week, Celeste Santos (10) mistakenly heard Avery say “go” when she really said “standby,” and the doorbell rang twice during a serious scene. The actors went on as if nothing happened, covering up their mistake.

“We’re like a family and we’re crazy, just like the Sycamores, and we had a play that fit us so well that we could really relate to it,” Avery said.