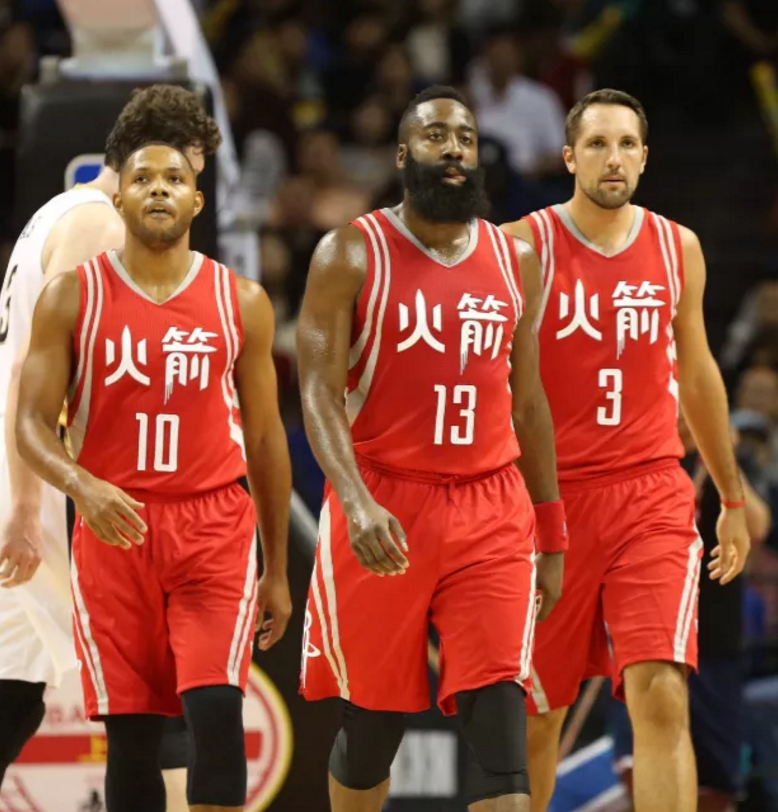 [dropcap]J[/dropcap]ames Harden sliced through the Warriors defense, spun off Andre Iguodala, and stepped back, draining a midrange jumper to win Game Three and cut the Warriors lead to 2-1 in the series. The fans erupted into cheers, but when the cameras panned to the Rockets bench, the players looked sullen and weary. In the macro, this moment encapsulated the lack of chemistry and camaraderie that led to a team with championship aspirations self-destructing into one of the most disappointing teams in the league.

The Dwight Howard era in Houston ended just as it did in Orlando and L.A., with Howard slinking out of town leaving drama and all responsibility for failure behind him. This offseason, the Rockets made several acquisitions including bringing in new coach Mike D’Antoni, re-signing James Harden, and acquiring former New Orleans Pelicans Ryan Anderson and Eric Gordon for $136 million. This new-look roster has given Rockets fans hope for a more promising season this year.

“I am expecting the Rockets to beat the Warriors this season and make it to the Finals. Also, it’s really a shame that a lot of Warrior fans can’t own Durant or Curry jerseys because kids 12 and under should not play with choking hazards,” diehard Rockets fan Eren Baysal (12) said.

The first key to getting back on track will be to get players, coaches, and the management on the same page after a year of toxicity and disappointment that resulted from the rift between Howard and Harden. The Rockets are now undeniably Harden’s team and he needs to embrace this leadership role on and off the court.

Last year, the combination of underachievement, involvement with the Kardashians, arguments in the press with Howard, and shoddy defense that resulted in 8-minute video showing his carelessness culminated in Harden being isolated from many teammates and failing to make any All-NBA teams, despite averaging almost 30 points per game.

However, this season he has already shown more maturity and taken on a leadership role in working out with teammates throughout the break. Harden is the difference between the Rockets being one of the worst teams in the league and a Playoff team, and this year’s offseason signings reflect that.

Both Ryan Anderson and Eric Gordon are excellent three point shooters and should be able to space the floor well when Harden drives into the paint. Gordon should be a contender for Sixth Man of the Year if he can stay healthy and run the second unit offense. D’Antonio is also a very creative coach and hasn’t had a superstar like Harden on one of his teams since Steve Nash. In the first game of the season, Harden scored 34 points, racked up 17 assists, and pulled down eight rebounds.

“I think Harden truly has a good shot at being the MVP this season. He is one of the best players in the entire league and should thrive in the new offensive system,” Baysal said.

In fact, D’Antonio expressed interest in playing Harden as a point guard similar to Nash this season. Anderson also provides stability for the Rockets at power forward, which they have been struggling to find over the past few years. The offense will be extremely potent this season and should be second only to the Warriors.

However, the strength of the offense is countered by what looks to be a very porous defense. D’Antoni’s defensive reputation is a bad as his offensive is good, and he is joining one of the league’s worst defensive teams. After losing a powerful paint protector in Dwight Howard and adding feeble defenders in Anderson and Gordon, the Rockets will undoubtedly struggle mightily on the defensive end.

Another possible weakness of the roster assembled by general manager Daryl Morey is durability. If Harden suffers any injuries this season, the Rockets are in serious trouble. Patrick Beverley, Nenê, Anderson, and Gordon have all had issues staying healthy in the past.

While the Rockets have definitely upgraded the roster from last season, many fans are still a bit over-optimistic for this upcoming season. While people inside the organization have voiced their hopes for a championship run, a more realistic expectation would be to advance to the second round of the playoffs. The Rockets lost their first game against the Los Angeles Lakers on Wednesday, and face off against the Mavericks tonight at 7:30 p.m. in Dallas.